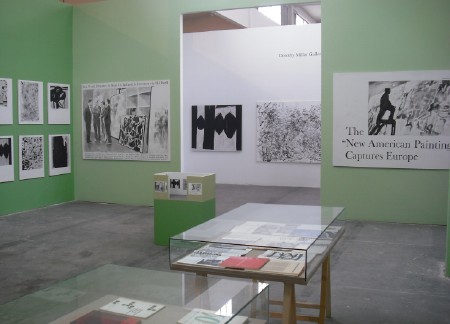 Various venues, Istanbul, Turkey The 11th Istanbul Biennial is curated by the Zagreb collective What, How & for Whom (WHW) − Ivet Curlin, Ana Devic, Natasa Ilic and Sabina Sablovic − and is held in three venues, along with a series of events in a fourth. This is probably the best biennial I’ve seen in a while; not only because there is a surprisingly small amount of ghastly work, but also because it is refreshingly transparent. Even when this transparency is not intentional, it usefully highlights the weaknesses of the biennial tradition as a whole. For a start, the curatorial concept − aggressively present throughout the exhibition − offers ‘political’ and ‘economic’ concerns with a range so staggeringly wide that any analysis attempting to seriously address them would take ten times the space of this review and, indeed, ten times the space of the curatorial statement itself. In regard to the Biennial’s title, ‘What Keeps Mankind Alive?’, taken from a song in Bertolt Brecht and Kurt Weill’s The Threepenny Opera (1928), the online version of the curatorial statement pauses to add that it, ‘surely could be seen as being grandiose, [even] pretentious. And why not?’ The text proceeds with a ‘now more than ever’ list of planetary horrors – it’s a scary roll call ranging from rampant ‘depoliticization’ to mass killings.

Tellingly, an announcement for one lecture event pleaded for a return to a ‘world view’ following ‘Postmodern fragmentation’. Biennials have actually long perfected this appetite for broad perspective; the phrase ‘global urgency’ is now essential in the dictionary of contemporary ‘biennialese’. We are pan-political, trans-disciplinary, omni-concerned. At one point in Istanbul, I realized that some Mladen Stilinovic prints to my right were deploring global inequalities (‘Nobody Wants to See’, 2009), while a Rabih Mroué video to my left was apologizing for the Lebanese civil war (I, the Undersigned, 2007), and the installation behind me was addressing the Srebrenica massacre (Marko Peljhan, Territory 1995, 2009); on the floor, fliers by Sanja Ivekovic (which are, in fact, on almost every floor of the Biennial) condemn the fate of abused Turkish women via shock statistics and angry demands from anonymous NGOs (Turkish Report 09, 2009). For an artist who has been concerned with the topographies of feminism and activism as long as Ivekovic, the fliers’ ubiquity and bold-font fury, with its colonial connotations of mass-educational pamphleteering, is almost comical. However, what I’m trying to highlight here is not so much the quality of individual works, but the ‘world view’ that emanates from their cramped combination, and the crisis-zapping this implies.

Close by, a more complex ambiguity pervades Aydan Murtezaoglu and Bülent Sangar’s Unemployed Employees / I Found You a New Job (2009). Among the many elements in the single-room environment (drawings, diagrams, banners, a perfume stand), young men and women fold and unfold T-shirts, occasionally engaging the visitors in discussion. According to the vendor I spoke to, they were paid to do this at a slightly lower rate than average shop staff – but, he added, he was up for the job because the arts provide a space for an interesting exchange of ideas. As a comment on ‘what keeps mankind alive’, the work is not even remotely bombastic. However, as a reflexive statement on the biennial industry, it’s vital and haunting, as it touches on the widely accepted exploitation of artists who work not only for very little, but often for nothing at all. It also questions the actual content and the scenography of the ‘exchanges’ that complicate the precarious conditions of production, right here in the talent economy.

As Unemployed Employees … exemplifies, ‘What Keeps Mankind Alive?’ has many strengths. ‘Outrage corners’ aside, the exhibition is impeccably installed. The research, moreover, is impressive, drumming up a persuasive line-up that includes many new, barely known names from many new, barely known cities: two-thirds of the participating artists come from Eastern Europe or the Middle East (whatever ‘coming from’ these places might actually mean to them, let alone in regard to their work). Nor is the show as homogenous as some predicted: it is formally and thematically varied. Some highlights include David Maljkovic’s After the Fair (2009), a formally accomplished installation featuring a photographic superimposition of the Yugoslavian pavilion at the 1949 International Vienna Fair onto a present-day flea market in Zagreb, raising many historiographical issues with captivating, quiet virtuosity. Or the presentation of the collection of the ever-brilliant Museum of American Art project, which addresses the vagaries of Euro-American art history with cunning strategies of appropriation (Savremena umetnost u SAD, Modern Art in the USA, 2006). Not to mention Returns (2009) by the dazzling architectural collective decolonizing.ps, whose strategies for the sustainable decolonization of Palestine have been devised with an exceptionally light-footed sense of both medium- and site-specificity. All three of these initiatives are based on unusually long-term engagements with specific fields of interest and intervention − something that undeniably becomes visible in the work.

You can sense a similarly genuine engagement in the endeavours of the WHW collective. When photographs circulated of them standing on their chairs in a neo-Brechtian set-piece at their spring press conference, hopes were high that the ‘floor space × budget ÷ number of artists + e-flux announcement’ formula would be broken, and an engagement with the politics of the very format would ensue. For many of my colleagues at the opening − colleagues with whom I share a preference for art as a space for political articulation − this biennial was indeed a relief. I’m sure Texte zur Kunst will be gushing, and I agree this show is, for a biennial, intelligent and scrupulous.

But is there really no longer anywhere you can expect contemporary art to consider cleaning up its own house while it loudly raises the standard questions of intrumentalization, spectacularization and exploitation? No one expects biennials – of all creatures – to be prim and proper in that regard; but why do we need even more ‘new world order’ drama when we’re sitting on the answers to these questions? God knows, I’m not one to cast the first stone, but then again I’ve never compared myself to Brecht. When not a single artist was paid a fee for participating in a show in which more than 140 art works are displayed, and if the main sponsor is a corporation so gigantic you have unrelenting local protests, then what distinguishes you from other contemporary Euro-Leftists who have successfully compromised with capitalism? I am not being bitchy when I say Gerhard Schröder would be a more novel, thought-provoking point of reference than Brecht. Plus: Schröder’s quotes cost less in copyright fees than Brecht’s. Just a thought.