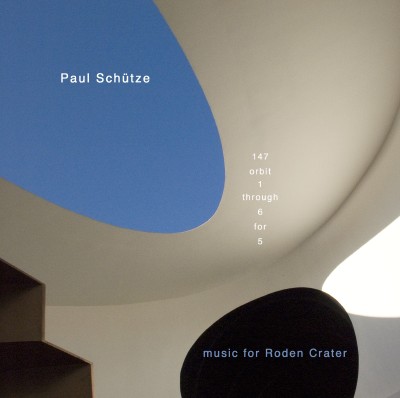 147 orbiting 1 through 6 for 5 – eight years in the making, recorded in Tokyo, London and New York, and just over five hours long – is the artist Paul Schütze’s portrait of James Turrell’s momentous ongoing project at the volcanic Roden Crater in the Arizona desert, which he bought in 1977 to transform into an observatory for the viewing of celestial phenomena. Many artists and composers have mined the relationship between landscape and abstraction by creating impressionistic responses to it, but Schütze’s approach is a little more literal: the sonic frequencies used by the musicians on his album respond directly to frequencies to which the rooms and corridors at Roden have been tuned.

Whereas most commentators have emphasized the extraordinary visual and philosophical qualities of Roden Crater (some apertures, for example, are made to view events of such infrequency that they will not happen in our lifetimes), Turrell’s meticulous treatment of its sonic components has received fewer column inches. It’s a little-known fact that every physical space is tuned to a resonant frequency. Turrell employed an acoustician to gauge the frequencies of the crater, the results of which were then built into the architectural spaces. Someone whispering in the central chamber, for example, can be clearly heard on the outer rim, and in one corridor footsteps will each produce two notes. This is one of the reasons Turrell intends no more than eight people to visit Roden Crater at any time – crowds would ruin the sonics.

147 orbiting 1 through 6 for 5 is designed to be either installed temporarily at Roden Crater or performed in the amphitheatre as part of the opening. When certain frequencies are hit in the music, the corresponding frequency in Roden Crater will resonate. As Schütze observes: ‘You can in theory cause all the spaces to sing like organ pipes.’ The title of the album is also a description of the composition, which is made up of 147 elements (from a complete phrase to a single note played by one instrument, which is repeated at a various intervals and located at a specific distance away from the listener) that orbit a single point (the listener) over time while moving very slowly across the six channels over five hours.

Schütze, who plays percussion and organ for the album, asked each player – Ko Ishikawa on sho (a Japanese bamboo mouth organ), Kevin Pollard on piano, Simon Hopkins and Raoul Björkenheim on guitars – to improvise, in isolation, to a set of instructions that were different for each musician, which Schütze then digitally rearranged. He wanted each instrument to be heard in a manner analogous both to the unpredictable way we observe astronomical movements and to the overwhelmingly visceral experience of being subject to the whims of the dramatic weather, light shifts and sky at Roden Crater.

The result is an extraordinarily distilled, unhurried and, surprisingly, occasionally lush soundscape; bass notes rumble like distant thunder, a piano phrase swoops in like a hawk only to dissolve into a single high note, while a lightning tone will be sustained to a point of almost unbearable intensity. As though echoing the space of sky and desert, there are long, atmospheric silences, punctuated only by the whoosh of a sho or the distant tremble of a cymbal. The sounds of different instruments occasionally weave or clash, before dispersing once again into space.

As no date has yet been set for the opening to the general public of Roden Crater, your best bet might be to travel there by sound: don your headphones, stare at the night sky and listen to 147 orbiting 1 through 6 for 5. It is, I suspect, the closest you can get to experiencing the sparse beauty of a desert without leaving the city.