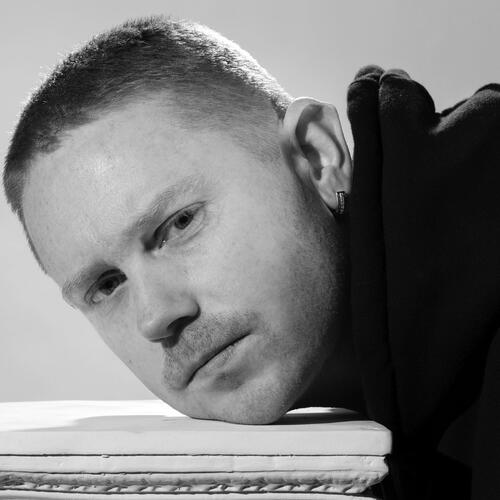 A chrysalis stirs on a glistening branch before it hatches into a beautiful butterfly. Over the course of one long night – many years long, but that’s beside the point – in an incandescent metropolis, through a seedy men’s toilet, an enchanted field, pink bedroom and haunted neon alleyways, the butterfly is annihilated, ripped to shreds and scattered to the wind, ejaculated into the balmy night. It’s the natural cycle of a dream that dies. It’s also the story of my old friend, Jim.

This year marks 60 years since the artist James Bidgood began production on what would be his only film, Pink Narcissus (1971). Shot on 8mm celluloid against homemade backdrops, conjured and constructed in the forbidding confines of his Hell’s Kitchen apartment, the film is marked by obsession: obsessive detail, obsessive craft and obsessive subjects. It took Jim eight years to reach its endpoint (or, more accurately, its point of no return); his perfectionism became a protracted liability when he was unwilling to submit a finished cut. The distributor, an exploitation and erotic films imprint called Sherpix, ultimately wrested the film from his control and put together its own edit, which was released in 1971. Incensed by the distributor’s cut, Jim removed his name. ‘A Film by Anonymous’ reads over the title sequence to this day. For 30 years, its author’s identity was unknown – until Bruce Benderson rediscovered Jim’s work, revealing his intricate process in a comprehensive 1999 Taschen monograph.

I first encountered Pink Narcissus in mid-aughts San Francisco. Smut rags from the 1950s, ’60s and ’70s were archived at The Magazine on Polk Street, a place where twentysomethings would pore over issues of Muscleboy and The Young Physique – two magazines Jim photographed for in his early career – alongside later titles, such as Honcho and Straight to Hell. Late nights, you could run into the erotic photographer Peter Berlin outside the Stud nightclub, or walk Valencia Street with the performer Bambi Lake, as she spun yarns about performing with the Cockettes. Jim’s myth loomed over us. Pink Narcissus was a near-constant programming go-to screened at the gay bar the Eagle, at friends’ apartments or at pop-up events in Dolores Park.

For gay men coming of age, discovering Jim’s work resembles, in both aspect and form, an archaeological dig that produces a glittering artefact from some ancient civilization. If adornment is a form of worship – from the Egyptian pharaohs in their tombs to Toddlers & Tiaras (2009–2016) – Jim’s religion would be homosexual lust: beauty, youth, hustlers and oral penetration. Based on the Ancient Greek myth, Pink Narcissus represents an allegory that is almost glib in its obviousness, about eroticism’s journey from innocence to abjection. Revolving around an androgynous catamite, played by real-life hustler Bobby Kendall, the film depicts Narcissus lounging in his pink apartment, entering a spellbinding fantasy of himself in various forms: as a matador in a hall of gilded mirrors, as a Roman slave boy, as an emperor and, ultimately, as the keeper of a harem of male dancers. He transitions from a hustler pleasing his johns to a john surrounded by hustlers. The film climaxes in a phantasmagorical manifestation of the Times Square neighbourhood on Jim’s doorstep. Ghouls copulate next to blood laboratories and dildo salesmen harangue passers-by alongside buskers, prostitutes and demonic clergymen. It’s a carnival of sexual horrors on the city streets that is meant to be juxtaposed as the pinnacle of depravity against the film’s more romanticized early scenes.

Pink Narcissus was scarcely explicit enough to be considered a blue film, yet too abstract to be thought of as merely softcore; it was a genuine, unattributed art film of recent vintage. (This famously led to speculation that it was an unfinished work by Andy Warhol or Kenneth Anger.) But what is most striking about the film is its aesthetic and composition. Jim’s work prefigures not only the baroque and synthetic fantasy-scapes of later artists – such as Pierre et Gilles, David LaChapelle and Kehinde Wiley – but also the blurring of pornography and narrative that has come in and out of popularity at arthouse cinemas in the decades since. Many of Jim’s in-camera transitions – the collapsing sets and split-focus tableaux – would later be adopted to both acclaim and derision by Brian De Palma and Michel Gondry, even if it was unlikely that they ever saw Jim’s film. Pink Narcissus gazed into the future, capturing a homoerotic narcissism that has consumed gay culture as we know it.

I learned that a reality check can have much the same effect as being starstruck when I met Jim himself. After I moved to New York in 2008, a friend who had discovered my admiration for Jim connected us, so that I could assist him on a new project. For a few months in 2009, and sporadically over the next five years, we would correspond via email. Sometimes, I would visit him in his walk-up on 14th Street and 8th Avenue. He spoke in a shrill voice, almost exaggerated for comedic effect. His own youth and beauty had abandoned him long ago, and the enchanted magpie’s nest of draped satins and gilded branches that once surrounded him had coagulated into an unnavigable hoarder’s lair.

Jim struggled to walk, which was troubling because his mattress was on the floor, surrounded by piles of all kinds of stuff – cheap, antique, pristine and unholy stuff. He would shove a pile of books and CD-Rs aside when he needed to work at his desk, often in a moment of obsessive frenzy – like when he collaborated on some projects for his friend, the shoe designer Christian Louboutin. I watched him crash his enormous head down onto his keyboard in dismay, wailing over the hell his life had become, cursing his dashed dreams, only to transform his woes into a campy, quiet laugh. I could never tell when Jim was serious or joking, and he could be brutally funny. He would often invite me over to ask me who my favourite porn stars were or to repeat his favourite sexual innuendos from classic films or to impersonate Mae West’s voice and send himself into fits of laughter. He felt like ‘old Hollywood’ was his own inside joke. Sometimes, I would arrive home to emails from him, sent five minutes after I had left, saying that he was feeling lonely.

Jim’s illustrations for Louboutin had the delicate whimsy and ensorcelling angulature of 1960s Disney animation. I would stare at his drawings of Cinderella’s glass slipper, engulfed in tendrils from a pumpkin-turned-stagecoach, and imagine that, deep inside the treacherous theme park of Jim’s ponderous septuagenarian physique, there was a beautiful princess locked inside a castle, spinning these visions into gold. But, in this mental image, she had also aged along with Jim into a Norma Desmond type – the has-been starlet from Sunset Boulevard (1950) – trapped in the body of a vulgar, gay packrat.

Whenever Jim spoke to me of Pink Narcissus, he did so with a sense of pride mixed with regret and rage. He would repeat some of the accepted wisdom about the film and then pivot to saying that none of it was true. He spoke so many times of how the film was stolen from him that it was hard to reconcile what really happened. Certainly, it was a wound that never fully healed, and his ensuing works were hogtied by his own post-traumatic stress. While his creativity was uncontrollable, he would have to overcome his own nihilism to finish a product. For someone like me, born in the 1980s, commerce is so baked into creative work that it’s practically part of the originating impulse. With Jim, I felt forced to behold the cauldron of artistic purity and, for better or worse, to internalize its outcome through some cosmic, homosocial osmosis. As much as certain things about Jim felt like a cautionary tale, being with him was also a celebration. I’ve tried to imagine what his life might have been had he conceded ten percent of his pride. What would it have been like for him to be feted at film festivals and museums? What would his Hollywood era have looked like? What about his pornography empire? Might he be in prison? Would he have died sooner?

Earlier this year, Jim died of complications relating to COVID-19 at the age of 88 – an impressive run. Pink Narcissus shares with Jim’s life a story of self-containment and fury. In his view, the fantasy realm is superior to the physical world; desire is for the desirer. Of art, he once said, it’s not about payment or praise, it’s only about the feeling. To Jim, art was pornographic because it ought to demand a physical response.

This article first appeared in frieze issue 227 with the headline ‘Elegy for a Packrat’.

Patrik Sandberg is a writer, producer and creative director. He is one of the founders of the 2010s art platform DIS Magazine and co-hosts the podcast Not Really with Paul Cupo of Hood By Air.