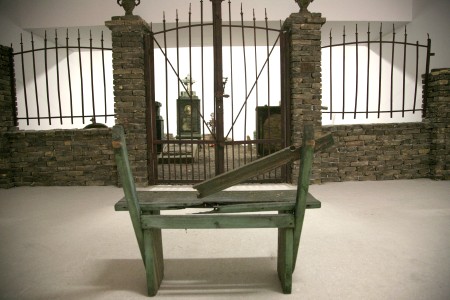 The area of the Faliro Delta, or Eden as it is known locally, is tucked behind the ancient port of Piraeus. Once a small fishing village, and then a resort, it has now been imperfectly digested into Athens’ sprawl. A strangely dislocated coagulation of highways, Roma shacks and luxury wharfs, it has most recently acquired several disused Olympic facilities that are progressing with unseemly haste toward the status of ruins. The theme of the second Athens Biennale, ‘Heaven’, is like an ironic jibe at Eden’s failure to in any way resemble its namesake.

The central exhibition space – a multi-storey structure built into the undercarriage of a bridge that ends before it reaches the water – was particularly disconcerting. The structure appears to be – to borrow Robert Smithson’s term – a ‘ruin in reverse’, desolate before it ever achieved completion, as if it envied the crumbling marble of the Acropolis that dominates every visitor’s impression of Athens. The juxtaposition of exposed ducts and pale pastel walls could have been a conscious aesthetic choice, though the paw tracks in the raw concrete floor undermined that conjecture. One of our guides noncommittally described the building as having been a warehouse; another told us that it was a car park. It later emerged that it was built in preparation for the 2004 Athens Olympics as either a warehouse or a car park, but that it was never used. ‘How is that even possible?’, I thought, as we drifted through the portal of the exhibition, two converging mirror walls that produced a space somehow both claustrophobia-inducing and infinitely large.

The Athens Biennale was unusual in that the entire show was not shaped by an overarching approach, but consisted of five more or less independent exhibitions, each with its own take on the assigned theme (this was set by artistic directors Xenia Kalpaktsoglou, Poka-Yio and Augustine Zenakos, a collective known as XYZ who also curated the first Athens Biennale in 2007, ‘Destroy Athens’). The disparity – in scale and scope – between the shows in the lower galleries offered by the three foreign curators and those on the higher levels presented by the two Greek curators, Christopher Marinos and Nadja Argyropoulou, was so palpable that it seemed almost unfair. I couldn’t help but wonder if the local curators had received substantially larger budgets or had been able to pull more strings, though I was assured that this was not the case. Rather, the impression of disorder in the ground-floor exhibitions was said to be a conscious architectural move, designed to simulate a reversal of entropy as one ascended, moving from temporary walls and incomplete facades to a conventional white cube at the top, as if the building, semi-sentient, had begun to assemble itself.

The abject potential of this architectural programme was best exploited by curator Diana Baldon, who erected walls of battered changing-room lockers and old furniture into a spiral that twisted into increasingly confined spaces, each niche of which contained a separate video installation, amongst which Michael Stevenson’s Introducción a la teoría de la probabilidad (Introduction to the Theory of Probability, 2008) was exceptional. A meditation on chance and fate, it describes a particularly curious historical episode: the tale of the Shah of Iran’s residency on the Panamanian island of Contadora, where he was trapped in 1979 as a guest of General Torrijos, described from the perspective of the General’s most trusted bodyguard. The story, told in Spanish, with subtitles, and illustrated only with simple diagrams and the monotonous shuffling and replaying of a deck of cards, conveyed the ineluctable logic of damnation without once resorting to pathos.

Ascending the ramps through curator Cay Sophie Rabinowitz’ ‘Splendid Isolation, Athens’, an attractive and visually austere installation, one came to the single most impressive exhibition, ‘Hotel Paradies’ – an immersive exercise in cinematic intensity curated by Nadja Argyropoulou. Here, Saskia Olde Wolbers’ perfectly formed film, Trailer (2005), narrated the tale of Algfar Dalio, an orphan who inadvertently discovers the identities of his parents whilst watching a film in a decrepit cinema. Minor Hollywood stars, they had disappeared into the jungle while shooting their last movie. With a slow pan across the vermilion interior of an abandoned cinema juxtaposed against the acidulous green of an impossible forest of Venus Flytraps and melting Monstera, Trailer looks computer-generated, but is entirely analogue, shot underwater in a controlled tank. The central installation in ‘Hotel Paradies’, D.O.M. (2004), by Robert Kusmirowski, presented a flawless facsimile of a vista of Warsaw’s oldest graveyard accompanied by a heavy metal soundtrack. This kind of movie-set gothic horror could fall flat, but in Kusmirowski’s work, perfectionism combined with overt artificiality surprisingly enabled it to fulfil a dual role of being both hilarious and spooky.

Argyropoulou’s section of the Biennale conveyed a feeling of complicity with the occult that no catalogue essay could manage. This was a confrontation with the desperate desire to pass through the inevitable endpoint of death that the other curators might have referred to, but only she managed to convincingly manifest. Entering ‘Hotel Paradies’ was akin to participating in a séance; an experience entered into half-jokingly, to be sure, but unnerving in its cumulative effect.