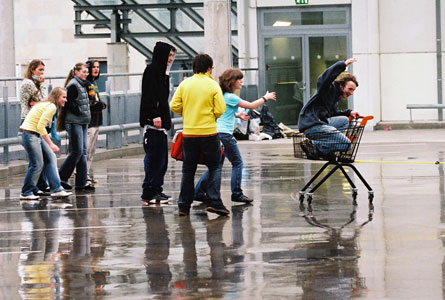 The Ars Baltica network evolved in the early 1990s to bring the newly post-communist Baltic states – Estonia, Latvia, Lithuania and Poland – back into the European cultural community, re-establishing historical links between Germany, the Scandinavian-Nordic countries and their neighbours. ‘The Triennial of Photographic Art’ is the organization’s headline visual art event. This fourth instalment, which opened at the Stadtgalerie Kiel in the spring of 2007, subsequently travelled to Tallinn, then the Pori Art Museum in Finland, and will go to Casino Luxembourg next year. Enrico Lunghi, Artistic Director of the Casino, is one of the project’s three curators, along with Kati Kivinen and Dorothee Bienert.

Since its inception the event has struggled against an imbalance in the status of the partici- pating artists from the various countries; leading lights of one scene were exhibited alongside journeymen from another (this was most apparent in relation to German artists). The previous Triennial smoothed this out somewhat, with a list of artists that included Knut Åsdam (Norwegian), Joachim Koester (Danish), Arturas Raila (Lithuanian) and Jari Silomäki (Finnish), and this time around the curators honed the exhibition to 14 artists and three collaborative groups, all on the cusp of bigger things.

Despite its medium-specific banner, the project steered away from photographic reflexivity to concentrate on a socio-political theme, while also accommodating video and installation. The curators and artists concurred in their catalogue and explanatory texts that camera-generated images have a role to play in mass-media legerdemain, and the audience shouldn’t forget it. To parse the project’s title – ‘Don’t Worry – Be Curious!’ – armed with a healthy dose of curiosity, we should be able to recognize political spin.

Coincidentally, the exhibition opened in Tallinn a couple of days after pitched street battles broke out between Estonian police and Russo-Estonian youths over the relocation of a monument to Red Army World War II ‘heroes’ – liberators from Nazism or Soviet occupiers, depending on your point of view – from the city centre to the suburbs. The reporting of the events was diametrically opposed in the extensive Kremlin-funded Russo-Baltic media networks and the national media of Estonia, Latvia and Lithuania. To the curious, the ideological divide was evident. Finnish artist Anu Pennanen plumbs this territory in The Tallinn Project (2004–6), in which she interviewed, on video, Estonian and Russo-Estonian youths about their views on the future in relation to life, nationhood and the city of Tallinn. The alienation of the Russian teenagers is clear in their testimonies: they understand that the value of their once dominant language and social position is being degraded. This is reflected visually via the juxtaposition of crumbling concrete Soviet modernity – used as a skateboard-cum-graffiti hang-out – and a recently erected gleaming glass shopping centre.

Alienation or alterity, conditions often associated with northern Europe, were the dominant themes of the exhibition. Latvian artist Kaspars Goba’s homo@lv (2006–7) is a series of portraits and interviews with homosexual couples involved in the Gay Pride movement in Latvia. The work foregrounds the state-legitimized violence and abuse that rained upon participants of the 2005 and 2006 Gay Pride Parades in Riga. Idealists need to be aware that the governments of the three Baltic States and Poland regularly flout human rights conventions enshrined by the EU (of which these countries are now members).

The disaffection is much lighter in Tellervo Kalleinen and Oliver Kochta-Kalleinen’s socially interactive video Complaints Choirs (2005–6). The work records a choral arrangement/performance of complaints compiled by citizens of four different cities who responded to adverts the artists placed in local newspapers publicizing the project. The audience can now compare gripes in Birmingham, Helsinki, Hamburg-Wilhelmsburg and St Petersburg, while singing along to reports of ‘the poor getting poorer’, ‘bad cups of coffee’, ‘public toilets out of paper’ and ‘beer that’s too expensive’.

Equally humorous is Olga Chernysheva’s video Festive Dream (2005), which finds ghosts of the Soviet (and even pre-Soviet) past in quotidian Moscow, as if an entire caste of Muscovites didn’t know that the future had arrived, as they wear outmoded clothing, toil at old-fashioned labours and participate in rituals plucked from the 19th century (such as maypole climbing). While the work may seem to be poking fun at country cousins, it also owns up to an essentially rusticated Russian humour and character: the Muscovites in the video are still as happy as any of Tolstoy’s ‘native’ Russian characters to be sticks-in-the-mud. Herein lies the strength of the Triennial: while the participating artists reveal varying degrees of social alienation prevalent in their home countries – which in some instances are quite alarming – at no time does the exhibition feel dyspeptic.