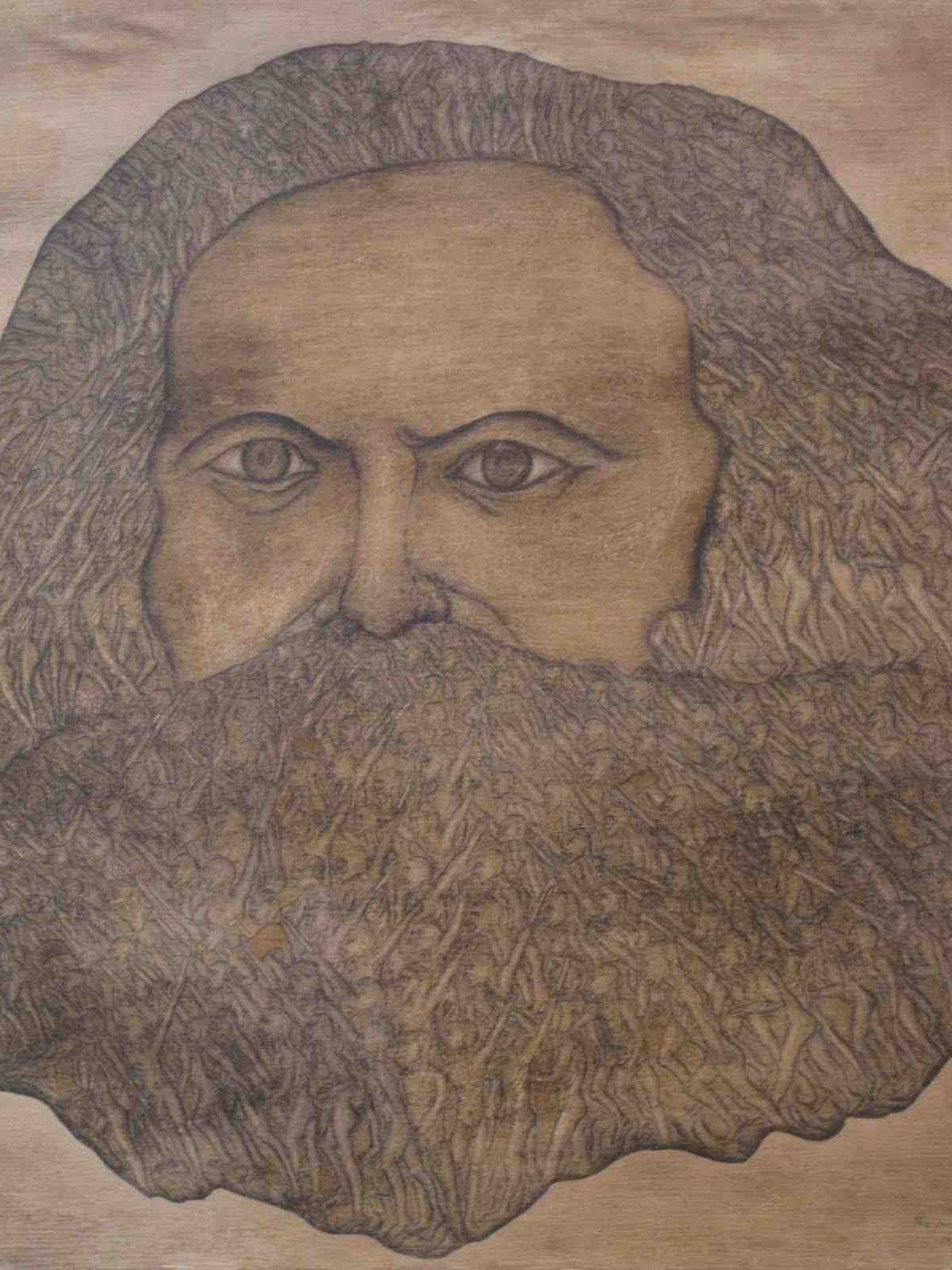 What amazes me, however, is the following: Even in the national pavilions of the Giardini – which are not under any over-arching curatorial supervision, but in each case are commissioned according to very different agendas – there are numerous signs that artists are groping in the dark of the unconscious and the (supposedly) ‘primordial’: grottoes and caves all over the place, clay sculptures, enigmatic allegories, prehistoric flintstones, (pseudo-)fossil findings. Is this parallel between the curated show and the national pavilions merely coincidental or does it tell us – as it steers art away from sober abstraction, calculated boutique chic, and more straightforward forms of realist social comment – something about the current state of things, the position of art in society (and economy) at large?

Even if the logo of the 55th Esposizione Internationale d’Arte looks a bit like a 1980s design for a painkiller (curly maze inside Keith-Haring-head with arrows shooting out), the exhibition leaves you neither sober nor hung over (even Ragnar Kjartansson’s little Greek Viking ship at the end of Arsenale, though christened S.S. Hangover, with its intervals of a brass ensemble playing a slow sad piece of music, is inducing goose bumps, not headaches). One might have objections to some implications that almost automatically result from a selection dominated by juxtapositions between ‘outsider’ and ‘non-outsider’ (I’ll come back to that), but a number of lines and constellations – such as Hilma af Klint’s organic abstractions with Emma Kunz’ esoteric geometry, or the British triumvirate of digital mash-up inventiveness with video installations by Mark Leckey, Ed Atkins and Helen Marten – are to the point (a New York curator said to me that he thought the hanging was too formalist; but if an inviting spatial choreography and a stringent theme are formalist, well then hurray formalism). Gioni summoned a large number of highly interesting works of art and artefacts which will be on people’s minds for quite some time (and this applies to art professionals and general audience alike – despite the fact that there is a relatively low number of contemporary star artists in it, this show will be immensely popular).

For the hike, Gioni has hired two sherpas: Carl Jung’s Rotes Buch is placed in the entrance rotunda of the International Pavilion in the Giardini, that strange dream book with its colourfully kitschy, illuminations-like images and its painstaking calligraphy, swaying between humble palpation of ones own fears and abysses – and sophomoric self-staging as a biblical figure. The corny painted ceiling (Renaissance and Art Nouveau in deadly embrace), which in previous instalments had usually disappeared behind neutral white, has aptly been exposed. The Arsenale course starts with a grand model of an encyclopedic palace by Marino Auriti, as if it was a dream of Borges’ infinite library realized by North-Korean architects.

A Swiss psychoanalyst with New-Age leanings (at least in comparison to Freud) and a dreamy, Italian-American self-taught artist: this pretty much describes the two main currents of this show. The section curated by Cindy Sherman at Arsenale also juxtaposes popular, ‘self-taught’ practices (private photo albums of transvestite men from the mid 20th century, fabric paintings by Hispanic prison inmates from more recent years) 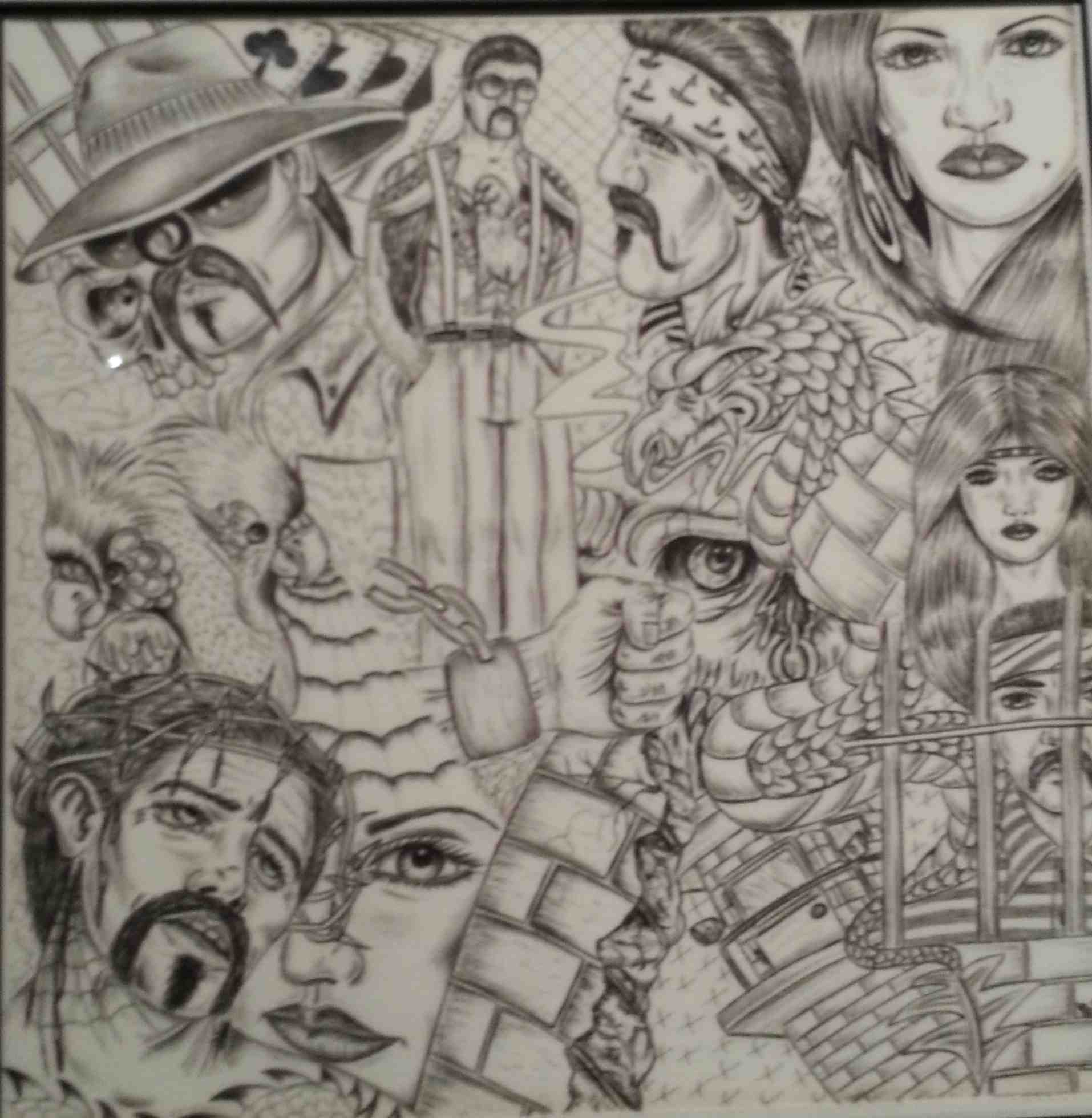 with iconic sculptural works by Jimmy Durham and Charles Ray. As a viewer, I am anything but exempt from the task of positioning myself ‘appropriately’ to these works: by implication I’m given the option to either behave like a scientist examining strange findings from the depths of human imagination, or like a topee-sporting neo-colonialist pinning butterflies from the uncharted territory of autism (1982-born Shinichi Sawada, whose little spiky totem sculptures seem to have sprung from an anime as much as from a fictional prehistoric culture). Given these two options, I have to consequently reject that very choice, and instead – and I think that effort corresponds to Gioni’s as well as Sherman’s intentions, who are rather like a kind of ‘therapeutic’ medium initiating a mental process – try to activate my own reservoir of affects and fantasies, as to not just proceed with numbing, distancing classification.

But as I said: the whole thing astoundingly continues in the national pavilions of the Giardini. In the Israeli Pavilion, Gilad Ratman involved a group of people doing clay sculptures; these are illuminated in the dark by the glow of the video installation in which the same people appear as a grunting primal horde, having dug a tunnel all the way from Israel right into the building (is this a surreal evocation of Gaza smuggling tunnels?). A hole is accordingly broken into the ground of the pavilion. In the Russian pavilion, another hole: Vadim Zakharov has installed a Grotto of Danae, onto which gold coins rain that are transported up through the hole in the ceiling. For Canada, Shary Boyle has built a stalactite and stalagmite cave, onto which bizarre images are projected with overhead projectors (Plato’s cave, all over the place…). In Berlinde de Bruyckere’s Belgian pavilion: a giant tree-like trunk made of wax and epoxy, fixed with sack-like elements reminiscent of scantily vetted amputations, enshrined as if it was a mummified mammoth. And for Mark Manders in the Dutch pavilion, wood and clay are the materials of choice for two large sculptures and several smaller works, all of which seem as if live-wired with traumatic, psycho-sexual energies, evoking an aura of early surrealist avant-garde, but with today’s production values.

Maybe all of the above examples are a little too much relying on a symbolic-allegorical summoning of transcendent meaning and physical presence; in any case I feel more drawn to Jeremy Deller’s British contribution and Mathias Poledna’s Austrian pavilion, which are certainly amongst the highlights in the Giardini. Probably because both manage to link unconscious or ‘primordial’ factors directly to the contemporaneousness and drollery of pop culture.

One of Deller’s air-brushed, large-scale murals shows Victorian socialist artist William Morris (who suddenly here looks like a mixture between Slavoj Zizek and Saddam Hussein) rising like a mythological Titan from the Venetian lagoon, with the luxury yacht of Roman Abramovich like a toy in his hand, just before letting it plunge. And prehistoric arrowheads form to the word ‘TEA’, behind a sober contemporary cafeteria counter, set up in the very place where historically, in the British pavilion, was the tearoom for the dignitaries. Poledna shows a four-minute musical animation in the style of Disney’s Bambi or Snow White – realized, in Los Angeles, with specialists able to do it the classical way. 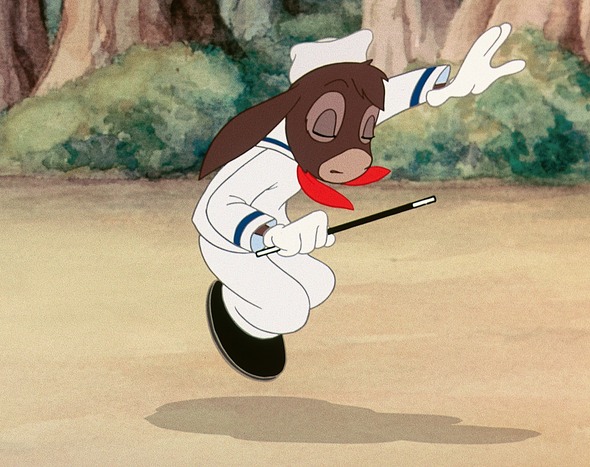 It’s not an original found object, but a kind of new reconstruction. Poledna does not rely on readymade or parody, thus generating a kind of double perception: I see the film projection and am inevitably reminded of childhood experiences – don’t I know this cute donkey with drooping ears in sailor outfit? – that I never could have had. He taps into our real-existing, pop-cultural affect reservoir, while diverting it into perfect fiction.

But where does this pervasive tendency towards the unconscious and the primordial come from, whether read as regressive/nostalgic/escapist or, on the contrary, as progressive/ utopian/speculative-fantastic? My guess is that it is an attempt to respond to the actual constraints of art in the wider social field. It has been noted by various sociological readings of contemporary society (from the celebrative exclamations of a ‘creative class’ by Richard Florida to the ‘critical’ analyses of theorists such as Boltanski/Chiapello and Andreas Reckwitz) that in neoliberal economies there is a demand to always be ‘creative’ in order to develop one’s own self – freelance artists’ second nature. This demand has been generalized into an imperative reaching far beyond the realm of art itself: individuals should take care of themselves (read: reduction of welfare and infrastructural support), while at the same time their ‘potentials’ are to be utilized. In other words, the creative process is meant to be incorporated into an optimization of the self consistent with an ‘optimization’ of society according to the basic, globalized neoliberal principles (the disastrous consequences of which are well known, from the financial crisis to the erosion of the middle class). Regardless of whether one agrees with these interpretations in all details (thinking of, for example, the fact that for large sections of the world population the imperative is still not ‘be creative!’ but the old-fashioned ‘work and suffer, or suffer more!’) the art world seems to become more conscious of its problematic pioneering role in this development – and turns to the unconscious.

Because whether it is Jung’s archetypes or Hilma af Klint’s higher inspirations: just as these approaches were perhaps also a kind of answer to the impositions of the new industrialized society at the time, the aforementioned contemporary tendencies are perhaps reacting to conceptual and aesthetic expediency being harnessed into economic expediency – and therefore they opt out of the idea of expediency itself. Autists and dreamers are at most ‘corrupted’ by their obsessions and desires – not by appeals to ‘reason’ coming from administrative and economic areas. The question is how long the hallucination can be maintained in order to skip the ‘creative class’.