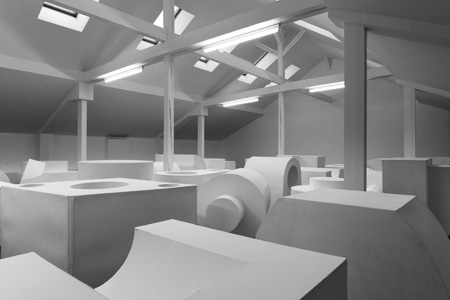 It is astonishing that such a short working life produced as concise and complex a body of work as Absalon’s, who died in 1993 at the age of 28 and whose work was the subject of a thorough and crisply presented exhibition at Berlin’s KW Institute for Contemporary Art. Over the course of just six years, Absalon, who was born in Israel and relocated to Paris in 1987, developed a formal language that fused geometric and spatial considerations with existential questions about the nature of everyday life. His works can be seen both as elegiac meditations on the raw fabric of the quotidian or exercises in the push and pull between freedom and constraint, empty space and solid form.
The centrepiece of the exhibition was a group of six ‘Cellules’ (‘No. 1–6 [Prototypes]’, 1992), which Absalon completed shortly before his death. Installed in KW’s main hall with such cool perfection that it almost invited contention, these pristine ‘living units’ were not actually conceived as sculptural objects, and comparisons with Minimalism were always anathema to the artist. Nor were the works intended to be exhibited together. Each of them, their dimensions defined by Absalon’s own body measurements, was a prototype for a house containing the basic furnishings needed to accommodate his finely calibrated living requirements. The houses themselves were to be built in six cities across the world for the artist’s own use – a project that was never realized due to his untimely death.
In KW’s spacious, sunken hall, the ‘Cellules’ could be viewed from above as a group, like a futuristic settlement. From a distance, the hermetic, bunker-like objects with their high skinny doorways (Absalon was almost two metres tall), curved walls, narrow window slits and varieties of heights and forms, appeared like elegant, playful expressions of geometric conjecture. Closer inspection (it was possible to enter all but one of them) revealed the ingenious spatial arrangement that enabled the artist to fit a bed, sitting area, kitchen and bathroom into such a confined volume, in six different equally convincing versions. One ‘Cellule’ is a tall column, spread out over two floors connected by a ladder; another comprises three small ‘rooms’ of different heights with curving exterior walls connected by a truncated hallway. With their uniformly white painted surfaces, however, the modules are non-functioning – the sinks, cupboards and drains are solid, mute stand-ins – and one wonders how the real versions would have accommodated the artist and the (albeit radically reduced) clutter of an individual’s life.
This is the problematic crux of any posthumous exhibition of Absalon’s work. As he said himself: ‘Obviously these houses will not continue to exist without me […] because once I am no longer here, these houses will disappear […] they are really constructions related to my life, to me, only to me.’ How can works so inextricably tied to an individual’s conception of his life continue to exist once that life is over? That the ‘Cellules’, so cleanly installed in this show, appeared to suggest a Utopian – or at least ascetic – take on life is a presumption that curator Susanne Pfeffer quickly dispelled, however, with the first work one encountered on the stairs to the upper floors: Bruits (1993), a short video loop of a close-up of Absalon emitting a piercing, prolonged scream in which anxiety, frustration or fear take the place of peace. This, and further performative videos, activated the mute sculptures by introducing the emotional mess, violence and complexity of a life lived.
Throughout the further four floors, a generous collection of videos, models and drawings fleshed out the various contradictory impulses that propelled the artist’s project. A room-sized arrangement of large, white geometric forms seemed to depict spatial riddles or plot out the mechanics of the mind (Disposition, 1990), while small tabletop models of furniture-like forms packed into cardboard-box rooms (Cellules [en silence], 1988) pointed inevitably towards the ‘Cellules’ themselves. The relation of interior space to exterior form was a constant fixation for Absalon, both in terms of his objects’ shapes and the insurmountable disconnect between an individual’s mind and body. In this definitive exhibition, the comprehensive selection of works and generous use of space allowed the works to articulate their own contradictory take on the interdependence of function and aesthetics, the life and the shell.