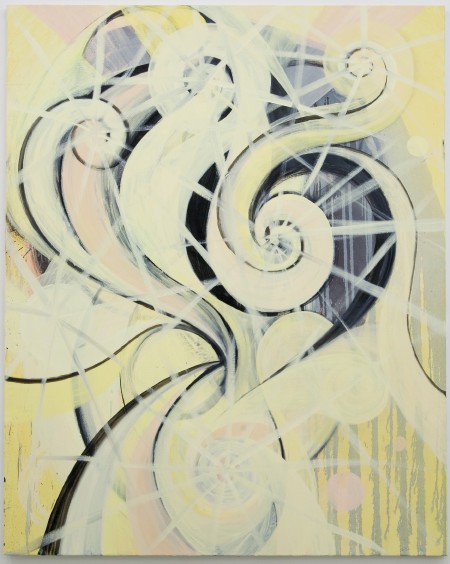 Some of Maya Deren’s feminist voodoo erotics could be discerned in Agnieszka Brzezanska’s recent show at Karma International, in which the Polish artist took the trope of the heart – the one we sign our love letters with, not the one that fills medical journals – and with a sincere and sensual wit cycled it through mediums as disparate as drawing, painting, photography and video. The exhibition’s title, ‘528Hz’, refers both to the heart imagery (Herz in German) and to the ancient Solfeggio frequency often called the ‘miracle frequency’, said to be at work in Gregorian chant and claimed by a vast Internet community to heal DNA. Whether one believes such claims or not, Brzezanska’s new body of work (concerned chiefly with the female body) is as strangely convincing as the sly and supple spirituality that defines it.

Smattering Karma’s walls like charms or icons, Brzezanska’s drawings and paintings employed a fluid spiral line that variously channelled both the genetic code and whirling dervishes. The drawings, with their deft, sensual lines and fluent movement between figuration and abstraction – a pair of women’s high heels moved upward into a flurry of heart-shaped curvilinear forms – recall both Henri Matisse’s and Art Nouveau’s stylized depictions of the female form. The paintings, in contrast, moved from starburst- and shell-like shapes (shades of Georgia O’Keefe’s and Arthur Dove’s earthy eroticism) to a more primly Constructivist depiction of a red heart holding a floating black geometric plane. These two styles came together in Untitled (2009), in which the curvy swells of a heart-like form – depicted in a palette of creamy reds and pinks – is mysteriously halved by an elongated black triangle, which cuts across it like a terse, geometric dagger.

The melodious and somewhat retro avant-garde stylings of these works played counterpoint to Brzezanska’s photographs, which had a documentary, nearly anthropological – if no less sensual and improvisatory – feel. In images taken along Mexico’s coasts, the artist sought out familiar shapes: round holes in a wooden fence frame bits of beach; likewise, the almond-shaped view between a woman’s legs gives out onto a seaside paradise. More surreal was a jade-green hall of mirrors studded with a lithe, naked woman and the flash of a camera; a large black heart, hands fluttering out from behind it that recalled a crow; and a shot of the Temple of the Skull at Palenque (a Mayan ruin in Mexico), whose vacant eyes and nose are mysteriously, yes, heart-shaped. But the pièce de résistance proved to be a short video titled Heart Play (2009), which features the artist and a friend bouncing around an apartment holding two huge hearts – one black, one red – and frantically spinning a series of heart-shaped rocks on the floor, all to a frenetic piano score composed by Marek Raczkowski, a Polish political cartoonist. The video’s playful sweetness, at once droll and earnest, shot straight for the heart. And despite the presence of another person (the artist’s ex-partner), the video emanated the mysterious autoeroticism – a distinctly female-centered Eros – that distinguishes Brzezanska’s new work. If her show was a testament to the power of love and belief, it was not of the lovelorn sort; it was entirely self-generating, and just a bit mystical.