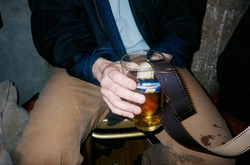 In Mass-Observation’s published report of studies undertaken during the 1930s in Bolton, The Pub and the People, there is a delightful explanation offered to the local newspaper by a worker as to why he drinks beer: ‘There is only one reason I drink beer: it is because I cannot eat it.’ The British pub is an enduring source of nostalgia, as well as a contemporary powerhouse of the wit, wisdom and solipsism of ‘ordinary’ people. Today, as the British government pushes the limits of liberal interventionism – curbing public protest, monitoring cultural production, campaigning for responsible drinking and introducing smoking bans – it seems more vital than ever that the free-form nature of the pub be protected. As Mass-Observation co-founder Tom Harrisson put it, in contrast to other venues for entertainment, politics, religion and so on, the pub ‘is the only kind of public building used by large numbers of ordinary people where their thoughts and actions are not being in some way arranged for them’. Whereas back in 1930s’ Bolton the pub as an institution had more buildings, held more people and took more of their time and money than church, cinema, dance hall and political organizations put together, the scene now is somewhat different. With the meritocracy of high capitalism overwhelmingly informing work and leisure patterns, the demographic of the pub and its role in our lives have altered enormously.

The contrast between Alan Kane and Humphrey Spender’s photographs reflects these changes, as well as the very different relationship the two photographers have with their subject. Spender was a member of Mass-Observation and undertook the study of Bolton pubs like an anthropologist infiltrating a tribe. The group was founded in an effort to bring British social sciences up to the level of practice in the USA, as the ‘real issues of social science can only be faced if the sociologist is prepared to plunge deeply under the surface of British life and become directly acquainted with the mass of people who left school before they were 15’. Like George Orwell, in his research for Down and Out in Paris and London (1933), these established academics attempted to merge unobtrusively with their surroundings. Unlike Orwell, however, their observations are not recounted subjectively: Spender’s photographs, taken with a hidden camera, are coolly distanced and classically composed.

Kane’s compositions, on the other hand, are close-up, harried and sometimes verge on abstraction, drawing attention to his position within the culture he represents. Whereas Spender’s anthropological images work the pump of nostalgia and offer us glimpses of social structures and interior design now more or less obsolete, Kane’s ribaldry is rather more familiar. Artist friends misbehaving, legendary central London pubs, popular cultural references and everyday objects indicate that this is a tawdry world that Kane is proud to inhabit. The images brag of transgressive behaviour: a pint glass full of piss in a urinal, a fellow artist spitting, a bottle of salad cream smashed and looking like puke, another friend smoking a bent cigarette, a displaced traffic cone and a cock and balls stuffed into a wine glass. Kane monumentalizes the ephemeral moment, but, as opposed to the work of Nan Goldin, for instance, the poignancy of such an act is lost to hubris as the subjects perform for the camera.

Although referencing a tradition of British satire – in fact, the pubs and bars in which these photographs were taken are in the parish on which William Hogarth based his engraving Gin Lane (1751) – Kane’s entrenchment in his subject makes satire impossible. In contrast to Spender, Kane uses the camera as a catalyst for performance that breaches the distinction between subject, audience and artist. What this translates to, in real terms, are self-congratulatory images, the events, people and places they document more abrasively predictable than poetically banal. And yet the coupling of the two photographers generates rich associations, with aesthetic, cultural and theoretical parities and contrasts. On one level we can reflect on the alacrity with which women now use pubs, or how particular pubs still tend naturally to sustain a specific class bracketing; on another we can compare the autobiography and irony of contemporary photography with the metaphysical accents of early-20th-century objectivity.