BY Alexandra Bachzetsis in Influences | 07 MAR 13

Artist, performer and choreographer Alexandra Bachzetsis on the things that have inspired her own work

A
BY Alexandra Bachzetsis in Influences | 07 MAR 13

Alexandra Bachzetsis is an artist, performer and choreographer based in Zurich and Basel, Switzerland. She began her career as a dancer, collaborating with Sasha Waltz & Guests and Les Ballets C de la B, among others. Since 2001, she has been producing and presenting her own work, which investigates the genre of performing arts, techniques of choreography and forms of behaviour. Bachzetsis’s choreography examines the mutual influence of gesture and movement in ‘low’ or ‘commercial’ genres – such as romantic comedies, TV soap operas, or hiphop videos – and in ‘arts’ such as ballet, modern dance and performance. Her performances also address stereotypical representations of the female body in popular culture, show business and the sex industry. In 2011, she developed a new version of her work A Piece Danced Alone, which was presented at CAC Brétigny, France; the 3rd Thessaloniki Biennale, Greece; and Chisenhale Gallery, London, UK. In 2012, she received the Swiss Performance Art Award and her piece Etude (2012) was included in dOCUMENTA (13) in Kassel, Germany. A Piece Danced Alone will be presented at the Museum of Modern Art in Warsaw, Poland, on 2 March. In September, the theatre version of her new work, The Stages of Staging, will premiere at Kaserne Basel and also be presented at the Stedelijk Museum, Amsterdam, the Netherlands; Festival Tanz at Dampfzentrale, Bern, in October; and Gessnerallee, Zurich, in November. 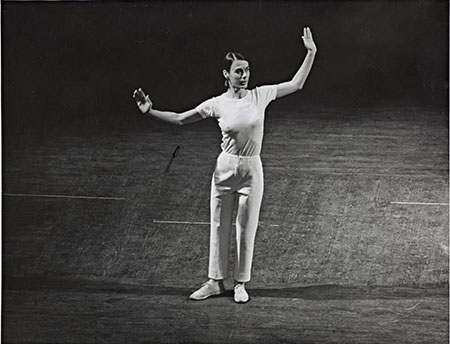 It is my overall concern to reveal people as they are engaged in various kinds of activities – alone, with each other, with objects – and to weight the quality of the human body towards that of objects and away from the super-stylization of the dancer.
- Yvonne Rainer, statement accompanying The Mind is a Muscle (1968)

I’m interested in an entire spectrum of expression and, to me, Rainer’s work stands at the opposite end to entertainment. Her performances are the antitheses of show business and have influenced the aesthetics of contemporary dance to this day. As a fellow female choreographer, I relate to her work and admire her playful stage sets and choreographic proposals.

In my own work, I try to analyze extreme forms of gesture and movement in genres that follow specific codes, such as pole dancing, tecktonik, clubbing, vogueing, R&B, tap dancing and the languages of everyday movement in different cultures. I use these types of physical expression for what they are: I directly appropriate them – and the technical skills of their users – and place them in a neutral context where they appear as physical practices akin to established modes of expression, such as classical ballet or professional sports. I urge the audience to take a critical, dialectical position to my work. As Rainer proposed in her 1965 No Manifesto: ‘No to spectacle […] No to trash imagery […] No to style […] No to moving or being moved.’ 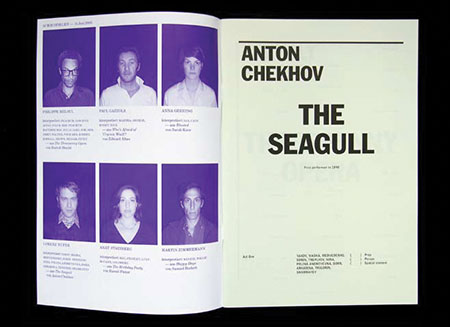 In my collaboration with the graphic designer Julia Born, we focused on Richard Kostelanetz’s 1980 publication Scenarios: Scripts to Perform, which comprises 700 pages of artists’ scripts, charts, notes, instructions and graphs that the reader can re-perform. We were interested in making works that had strict conditions and precisely defined scores and roles that would allow them to be passed onto and performed by anyone, thus becoming timeless. We chose to investigate the spoken word, the written word and sign language, as opposed to the languages of movement and performance. In the piece Secret Instructions (2005), we developed a performance that involves the interpretation of six classic plays – by playwrights including Anton Chekhov and Samuel Beckett – reduced to their stage directions. On stage, six people simultaneously interpret all six plays, with each performer embodying the movements of all the characters in one play. Theoretically, the performance could be enacted by anyone, but it could just as easily exist in the imagination, or as the booklet of stage instructions that Born and I conceived. 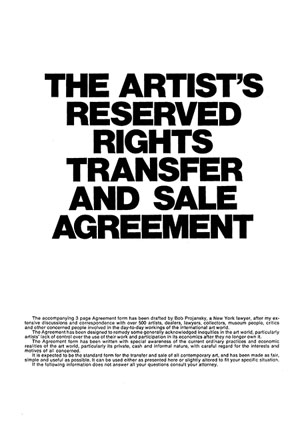 The Artist’s Reserved Rights Transfer and Sale Agreement, 1971, standard contract for the transfer and sale of contemporary art drafted by Seth Siegelaub and Robert Projansky

In Handwerk (Handicraft, 2005), I refer to The Artist’s Reserved Rights Transfer and Sale Agreement (1971) by Seth Siegelaub and Robert Projansky. In the spirit of Siegelaub’s agreement, I had a contract drawn up by a lawyer, which serves as part of the art work and also defines the legal conditions of the piece. Ironically, what is being ‘sold’ in Handwerk is people and bodies. The buyer gets the whole piece, which consists of the installation, a video with drawings representing pole dancing instructions, and the pole dance performance – all elements that reference the sale of bodies to an audience. I often use so-called low art forms, such as the striptease or pole dance, to reflect the business that lies behind them, but also to put the hardcore physical effort they involve in the spotlight. The dancer in Handwerk, for instance, has to be able to swing around the pole with his or her feet off the ground for a considerable length of time. In terms of the physical discipline it demands, this is not dissimilar to the training required for classical ballet or athletic sports. 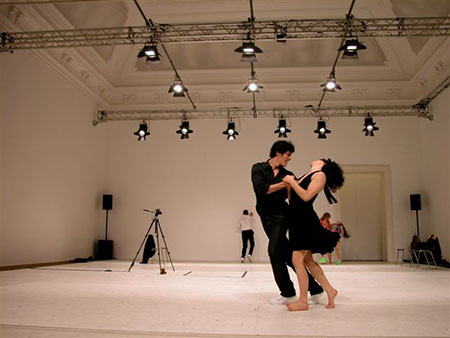 I think it is fascinating that so many Hollywood films and so many adverts are based on the same format: namely, Syd Field’s ideal paradigm of the ‘three-act structure’, which calls for plot-points in the first 20 minutes, followed by a ‘confrontation’, a climactic struggle and the aftermath – all occurring at set times throughout the film. In many mainstream movies and soap operas, the manipulation of the narrative according to marketing strategies and product placement is curiously both hidden and transparent. I’m interested in the psychological impact of such infiltrating lifestyle propaganda on the audience.

My work Dream Season (2008) is a soap opera and a study of a soap opera – a story and a meta-story. I explore both the structure of this dramatic form and the blood-sweat-and-tears nature of the acting it involves. The piece plays on the line that separates bitter parody and empathy, the analytical gaze and sentimental identification. For example, in the well-known soap opera Dallas (1978–91), there was a special season called the ‘Dream Season’ (1986–7), in which one of the main characters, Bobby, was killed off because the actor who played him, Patrick Duffy, had decided to leave the show. The show was unsuccessful without its star, however, so the producers brought Duffy back. This was explained by making out that Bobby’s death in the previous season had only been a bad dream that his wife had. I find it fascinating that an actor can become trapped in a role, as the fictional character takes over his private existence. 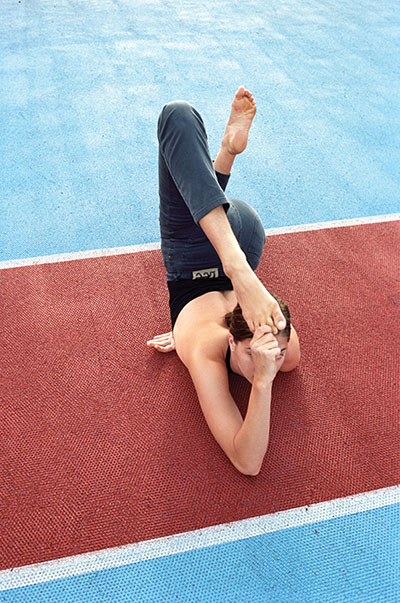 One of the main focuses of my research is body exploitation and the profound physical and psychological extremes that can be witnessed in YouTube videos like ‘13-Year-Old Yoga Prodigy Wins International Accolades’ or ‘Incredibly Flexible Contortionist Liu Si Yu’. I’m fascinated by the addictive yet masochistic power of performing, which compels the performer to strive towards increasingly complex achievements to serve a system that effectively takes possession of his or her body. My interest lies in the alienation process the body goes through while approaching perfection. In my works Perfect (2001), A Piece Danced Alone (2011–12) and Etude (2012), I explore the notion of the virtuoso by alternating between exact and approximate repetitions of certain movements. This choreographic pattern forces the dance vocabulary to re-assert itself. The performance becomes virtuosic because of the constant energy the performer has to exert to repeatedly enact the details of each intensely expressive movement. 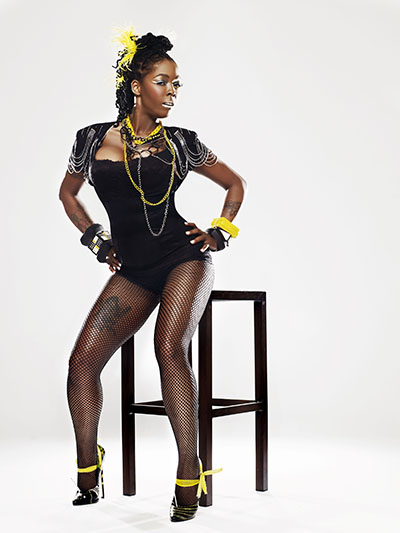 I’m very interested in the notion of female empowerment through the macho language that is used in hiphop. I explored this in my work Gold (2004), in which a male sexual fantasy projected onto the female body mutates into an aggressive feminine weapon against the male gaze. A female body in a gold bikini and high heels, wearing fake nails and gold jewellery, acts out the physical vocabulary of explicit feminine R&B culture; the lyrics to Missy Elliott’s ‘Work It’, Khia’s ‘My Neck My Back’ (both 2002) and Kelis’s ‘Milkshake’ (2003) serve as the performer’s instructions. These lyrics, which are often explicitly sexual, are handwritten on a4 sheets that get crumpled up and thrown away as the dance goes on. 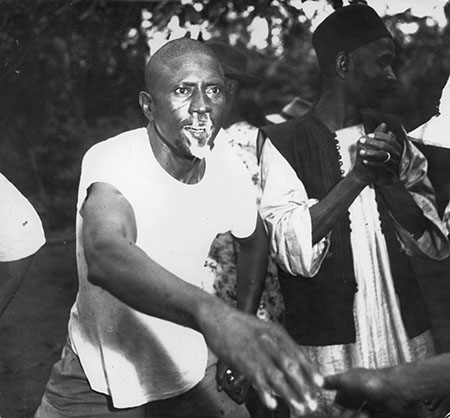 I’m intrigued by works that contain some kind of magic or riddle that cannot always be deciphered – a strange familiarity that renders the familiar strange. Roni Horn’s paired self-portraits (a.k.a, 2008–9), for instance, or Jean Rouch’s short film Les maîtres fous (The Mad Masters, 1955), Robert Aldrich’s What Ever Happened to Baby Jane? (1962), Jacques Demy’s Les demoiselles de Rochefort (The Young Girls of Rochefort, 1967) or Michel Gondry’s video for the Chemical Brothers’ ‘Let Forever Be’ (1999). This particular enigma of effects involves the canniest observation of contemporary personality types – their shared gestures, clothing and dramas. 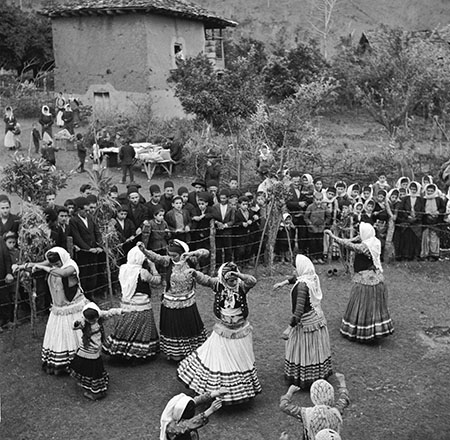 Village girls dance at a wedding festival in the Mazanderan province of nothern Iran, c.1952

Because of my paternal Greek heritage, I have witnessed many rituals related to dance and I have regularly observed the lively exchange of gestures, which I always find very inspiring. I love the celebratory dances and rituals shared among families or small communities for their authenticity and their playfulness. You can find many examples of these on YouTube: one of my favourites is ‘Petros Dancing Zeibekiko – Amazing!’, in which a groom performs a traditional Greek dance at his wedding. The dance, which is typically performed by men, allows them to express emotions such as sadness, pain, love and loneliness. This version is particularly playful, light-footed and impressively rhythmic, while employing a very casual body language. These moments of magic and intimacy within close-knit communities can be seen in all cultures, from Spain to Iran. A Spanish Romani family in ‘Familia Montoya y niños gitanos Bulerias y rumba’ (Montoya Family and Gypsy Children Dance Flamenco and Rumba) is an example of unhindered, expressive power, in which children dance as the family gathered around the table sings and claps. The physical closeness of the performers and the audience – also witnessed in a homemade video of Iranian men break-dancing at a wedding party in Tehran in 1991 (‘Tehran Iran Dance 1’) – are beautiful instances of joy and shared emotion.