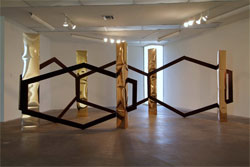 Donut shops anchor mini-malls throughout the greater Los Angeles area. Corner after corner of the city is filled with L-shaped, single-storey stucco buildings, usually housing some combination of donut shop, medical office, ‘fast-casual’ dining, launderette and/or discount clothing retailer. The names, signs, buildings and interiors of these commercial spaces with their distinctive cantilevered façades are nondescript and purely functional. There is no attempt at imaginative typography or fancy marketing: it is a purely take-it-or-leave-it, service-oriented landscape.

Since coming to Los Angeles from Germany nearly ten years ago Alice Könitz has been making sculptures that evoke these practical environs. In her third solo exhibition at Susanne Vielmetter Los Angeles Projects, Könitz incorporated ‘four sculptures that could be proposals for public works’, along with maquettes and one fully realized public piece (on view off-site for 24 hours). The works in the exhibition were an exercise for future development, a strictly provisional touch typical of Könitz’ work. Simple, spare and unpolished, her objects regurgitate a High Modernist sculptural and architectural language, revealing these bastions of the 20th century as deteriorating and unsustainable.

The centrepiece of Könitz’ project was a public sculpture located at 24-hour California Donuts, an eatery located near the junction of 3rd Street and Vermont Avenue, just east of downtown Los Angeles (Public Sculpture Part II, all works 2006). Here she installed a decorative folly consisting of three pillars supporting golden horizontal platforms. (Appropriately the work was originally intended for viewing 24 hours a day but, owing to a misunderstanding with the shop’s proprietors, was displayed only briefly.) Although conspicuous, this fragile architectural addition (built of paper and a thin composite-wood board) could hardly have been mistaken as supporting the weight of the overhanging façade. On the far wall of the store’s interior Könitz installed, one on top of another, solid golden forms out of which rows of pre-existing dining booths extended. These hexagonal shapes highlighted the otherwise forgettable décor: drab and muted walls displaying posters advertising the establishment’s caloric delicacies.

A series of photocollages and two scale models at Vielmetter’s space were the sole remnants of Public Sculpture Part II in the exhibition proper. The inside of the gallery space was dominated by Könitz’ Mall Sculpture. The spacious work was all about its own structure: four multifaceted golden pillars linked by angular geometric motifs that echoed those found within the donut shop. These empty decorative shapes allude to atomic age fast-food signage and the various dingbats and moderne reliefs that adorn much mid-century Los Angeles architecture, and Könitz has used similar nostalgic devices before. Opposite Mall Sculpture lay Logo for the Encounter. The pentagonal ‘logo’ was a torqued, misshapen construction of compressed particleboard and mylar set atop three clear plastic cylinders. Open in the middle, it formed, with its fifth side crushed and distorted, what looked like a section of industrial air duct twisted into a crystalline arrangement. Logo for the Encounter was set no higher than one’s knees; I was hesitant to approach it for fear of its toppling over. Likewise, Mall Sculpture carried a similar tactility of dysfunction. Each work seemed poised to fail and collapse beneath its own lack of mass or structural integrity. These are cursory constructions held together by glue-gun technology, underlining the grandiose pretensions of predominantly male-made public sculpture by the likes of Mark di Suvero, Richard Serra or Alexander Calder. Könitz’ forms suggest that the clean, stable reassuring monumentality embodied in such works is in reality splitting at the seams.

In Könitz’ sculpture, as in the real world, there are no clean edges, and form and function must make allowances for one another. Her materials – paper, cardboard, plastic, felt and chipboard – are the stuff of impermanence, and their surfaces belie hasty creation. These works are endowed with a supposed functionality, but rather than create an actual, practical architectural support or real signage for a mini-mall donut shop, Könitz creates an object that embodies our conception of what that piece of signage could be. The former has function, while the latter is completely dysfunctional. Hollywood creates props using the same illusory strategy, and High Modernist architecture seeks opposite ends: structurally stable elegance. (Think of Los Angeles International Airport’s iconic Theme building, coincidentally housing the Encounter restaurant.) Yet both extremes are impossible constructions, and Könitz seeks to realize that impracticality with the unsound edifices she creates.