Jan Kedves Your acclaimed new play at the Volksbühne is called Ohne Titel Nr. 1 (Untitled No. 1, 2014) – a name usually reserved for art works.

Herbert Fritsch Yes, there are clear links to art. I’m thinking of Untitled No. 1 [1944–45] by Jackson Pollock, or other paintings in the same vein. I often used to say I was really only interested in painting. As a student at the Otto Falckenberg Drama School in Munich in the late 1970s, I would often visit art museums – Lenbachhaus, Haus der Kunst, Pinakothek. I studied Kazimir Malevich and Mark Rothko especially closely. Even today, I find their paintings incredibly exciting. The colours, the gestures, the rhythm! It’s hard to describe, but I do know that the theatre has often failed to give me such sensations and that literature and cinema rarely grip me in this way either. 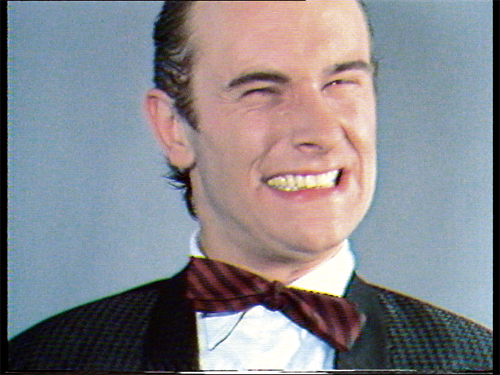 JK Malevich described his painting Black Square (1915) as ‘a desperate attempt to free art from the burden of the object’. As a director, what are you freeing theatre from?

HF From the burden of themes and masses of text; from the burden of contrivance, propaganda, politics, didacticism – from all the stupid stuff that wants to crush art. I want to throw all of that out! Theatre must be totally free. Something where people are not just bombarded with talk and expected to nod their heads.

JK In your plays, the audience certainly isn’t bombarded with talk. In Ohne Titel Nr. 1, the actors do make sounds – warbling, screaming or mumbling – but it’s impossible to understand a word.

HF That’s what I love about art, especially painting: that it does without words. Not that I want to make theatre the same way as fine art or anything like that. Not at all! I’m interested in the freedom of not having to submit to any script, of being able to just do – like painters. Or, as I did myself in my video Ohne Titel (Untitled, 1983). I just grinned and looked into the camera, trying to maintain the grin for as long as possible. That is another of the roots of Ohne Titel Nr. 1.

JK How long did you manage to keep grinning?

HF The video is 17 minutes long, but after five minutes my face starts trembling and contorting, to the point of torture. It has nothing to do with performance, nothing to do with Marina Abramovic’ or whatever. Nor is it an acting exercise. It was just a very compact, clear picture that I wanted to create without words.

JK In terms of theatre, would it be fair to say that a play without words is like a painting without figuration?

HF There’s no directly defined theme, that’s certainly true. I’m interested in non-figurative theatre – theatre that doesn’t have to ‘work through or ‘explicate’ anything, but which can be thought about freely. Hence the title Ohne Titel Nr. 1, which is also non-figurative.

JK But the presence of actors on stage means, in a sense, that the play is still ‘figurative’ doesn’t it?

HF Sure, the non-figurative element cannot be fully achieved. As soon as a human being appears, as soon as a hand is raised or a certain facial expression is pulled, the figure is there. Which is not the case in painting. That’s why I envy painters. But in my plays, I still try to come close to non-figuration at certain moments – to reach a point where nothing is dramatic anymore. This may go in the direction of dance, song, or music. These, too, are art forms that make do without words.

JK Sometimes you let the body do the talking. At one point in Ohne Titel Nr. 1, one of the actors has a serious attack of flatulence. That’s not so far removed from Jackson Pollock and his ejaculatory drip pictures.

HF Yes, perhaps there is a similar spirit behind them. What I find fascinating about Pollock is how freely he painted, but also how compulsively. That should really be a contradiction: that you should need to do something liberating, something that you can’t not do. To put it in very primitive terms: if someone needs to fart on stage, and then can’t stop farting, people laugh. I wanted to make full use of that. Normally in show business, you always have to keep your body under tight control – not just there of course! I experienced that as a child, when I had to go to Catholic church. Every morning, I had to struggle with the urge to fart, I was doubled over with pain. Eventually one slipped out and half the congregation laughed their heads off.

JK Before Ohne Titel Nr. 1, you produced Murmel Murmel (Mumble Mumble, 2012) at the Volksbühne, a one-word text by the artist Dieter Roth from 1974 consisting of endless repetitions of the word ‘Murmel’ (meaning both ‘mumble’ and ‘marble’, the glass bead toy). Did the positive response from critics and the audience strengthen your belief that theatre can work without any words at all?

HF No, that was something I already knew before. There was a time when I would often do one-man events, my so-called Nullshows (Zero Shows), in the early 1980s. I would perform alone, just doing whatever I wanted with no preparation, and without talking. It worked. But I wanted to try it out with a larger company.

JK I’ve heard you knew Dieter Roth personally and promised him to eventually adapt Murmel Murmel for the stage.

HF Yes, I met him through the gallerist Felix Handschin in Basel. Felix knew my one-man shows and because he was good friends with Dieter, he would always say to me: ‘Herbert, sometime, you really must do Dieter’s Murmel Murmel.’ Then, sadly, Felix died, in the early 1980s. At his funeral in Basel I staged Murmel Murmel with actors for the first time. There was lots of laughter; it was a lovely funeral. Dieter was there too. Afterwards, he gave me a bottle of red wine with a drawing he did on it.

JK He liked your production?

HF Yes. Originally he wrote Murmel Murmel for Werner Düggelin, the director of the Baseler Theater, who staged the world premiere – an amazingly elaborate production with singers and so forth. But afterwards Roth ended their friendship because he thought Düggelin had staged the play as if it was a recital from the telephone directory – as if it made no difference whether it was Murmel Murmel or any other random text. During our rehearsals at the Volksbühne, that was always our basic question: are we staging the phone directory or Dieter Roth? I would say: it’s about each individual repetition of the word, the rhythm in that, ‘Murmel … Murmel … Murmel’ – it’s about the various emphases and about the actual meaning of the word: Murmel.

JK In Ohne Titel Nr. 1, too, there’s a single word that is etched on the audience’s memory. The play isn’t quite entirely wordless; the one word spoken gets a big laugh. An actor tears the bowtie from his neck and hisses loudly: ‘Frrritschhhh!’

HF I didn’t tell the actor to do it like that. But I don’t mind at all. In the play, that moment is like my signature!

Herbert Fritsch is a Berlin-based director, dramatist and actor. His current play Ohne Titel Nr. 1 (Untitled No.1) premiered in January 2014 at Berlin’s Volksbühne.

Jan Kedves is a writer, editor and author of Talking Fashion. From Nick Knight to Raf Simons in Their Own Words (Prestel, 2013). He is based in Berlin.