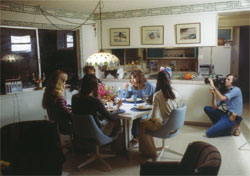 For 12 hours at Casco a handful of dedicated viewers watched the entire run of An American Family, which drew a weekly audience of over ten million when it was aired on PBS in 1973. Billed as the first ever reality TV show, An American Family is also notably credited with having offered the first unbiased, mass-media representation of a gay youth. These two claims belong to an official story, dutifully rehearsed at Casco by co-director Susan Raymond in conversation with Stuart Comer, the curator of the event (which will be reshown at Kunstverein Munich in April). For seven months in 1971 she and her husband, Alan, recorded every move of the Loud family, a statistically average example of California’s white upper-middle class. Susan went on to explain how, with microphones imbedded throughout the suburban house and thanks to a mutually affectionate relationship with the seven-member family, the Raymonds became invisible, capturing on film what no ethnologist or sociologist had before, namely the ‘live’ disintegration of a prototypical American household.

In the programme’s second episode Pat and Bill Loud’s 20-year-old son Lance strikes the first blow to the ideal private microcosm, as he moves from Santa Barbara to the Chelsea Hotel in New York. There he quickly forms a surrogate family of sorts, in the gay art set presided over by his long-time idol and father figure, Andy Warhol. The second blow to mainstream America occurs in the show’s final episode, when Pat unexpectedly files for divorce. Under the Raymonds’ omniscient camera eye the Loud family seems to weather these domestic turbulences with remarkable ease: at no time during the 12-hour run does a anyone show any particular sign of distress.

This absence of emotion no doubt accounts for the series’s enduring shock value, as well as for its unanimously negative critical reception in 1973. No tears are shed in the Raymonds’ portrayal of bread-and-butter America, as the nation’s values quietly go down the tube. But if An American Family remains a cornerstone of reality TV, it is not because of the filmmakers’ putative objectivity. Rather, it is their embrace of avant-garde cinematic conventions – protracted duration, non-structural editing and naturalistic sound – that compels absolute faith in the veracity of the footage. Ironically, however, the moment the two terms ‘reality’ and ‘television’ officially conjoin, the dream of transmitting unmediated reality disappears. Indeed the Raymonds’ two subsequent projects on the Louds – the 1983 episode entitled American Family Revisited and the 2001 film of Lance’s battle against AIDS-related illness – prove that the filmmakers themselves misunderstood their initial success. For after An American Family, the closer the Raymonds imagine getting to the truth of the Loud family, the deeper the Louds sink into the quicksand of fiction and the more the Raymonds find themselves documenting made-for-television ‘reality’ lookalikes. As Slavoj Zizek has remarked, the passion for the Real ‘culminates in its apparent opposite, as a theatrical spectacle’. The fact that the Raymonds have become actors in their own spectacle only testifies to the incredible realism of the first ever reality TV show.

Antony Hudek is a curator based in Antwerp, Belgium, where he works at the Museum of Contemporary Art (M HKA). He also runs the curatorial studies programme at KASK School of Arts, Ghent.