A year of unrest in the UK

The one theme that has bound together 12 months of sporadic yet extraordinary public unrest, in Britain and across the world, is the sense that we cannot go on like this. Neo-liberal capitalism is done for, a proven failure that even its beneficiaries rarely bother to defend anymore. The architects of the market-fundamentalist catastrophe respond in the same way: ‘Well yes, but what would you replace it with?’ Perhaps the most annoying thing about this is that the rhetorical question actually does need answering. The greatest demand of our age is to think not just about the present age, with its concatenation of crises, but beyond it.

The slow-motion collapse of the western political ecology shows no signs of abating: from crises of representative democracy through the felling of media barons, to endemic corruption in the upper echelons of the police, industry and, of course, the banking sector, it goes on. During the relatively innocent days of the UK parliamentary expenses scandal in 2009, MPs talked about the challenge of winning back the public’s trust. Can any of our power elites realistically expect that to happen now? The seeds of their own downfall are being sown by those insisting on pushing late capitalism beyond its own end-point, into a dark, bureaucratically bound near-future: witness the unelected banker-technocrats appointed in Greece and Italy.

Global perma-crisis is a challenging environment in which to talk about grand visions of the future. The interlinked flash-points have been so intense, and have occurred in such rapid succession, that an excitable 24-hour news cycle now leapfrogs from one story to the next: from the eruption of British student protest symbolized in the storming of the Tory HQ at Millbank in November 2010, to WikiLeaks, to the Arab Spring, to the 500,000-strong trade union rally of 26 March 2011, to Libya, to internet hacking group Anonymous, to Hackgate, to the UK riots in August, to the continuing Eurozone crisis, to the Occupy movement, to Berlusconi, and so on. 2011 was a year created in the head of a rolling news producer – it’s vitally important that we take our ADD medication and start to take the long view.

Eighteen months into the British government’s austerity programme, there are one million young people unemployed: these 16–24 year olds may not yet realize it – though some of them certainly do – but they face a unique challenge. Theirs is the generation which must offer an alternative, who must think beyond capitalism. In amongst the tents of the Occupy movement, and the emerging networks connecting on- and offline protest movements, this is already happening. But they won’t be rushed. The proto-Utopians are exemplary in their pragmatism, and patience: first you complete your march, or your debate, or your DDoS (distributed denial-of-service attack), or your direct action, then you retire to the pub and talk about what comes after prefigurative politics.

UK Uncut, the leaderless pressure group responsible for a year of direct action, mostly against tax-dodging high street stores, is perhaps the clearest example, filled with idealistic, intellectually fulsome young lefties, who nonetheless know that you have to be hard-headed to start to win the argument. Back in October, after their Westminster Bridge occupation to protest against the privatization of the National Health Service, I congratulated one young UK Uncut activist on repeatedly getting the message about corporate tax evasion into the most unlikely of media outlets. He beamed: ‘UK Uncut is the strongest transitional argument I’ve ever come across.’ And that’s the key point: it’s only transitional. There’s a good reason there isn’t more complaint about UK Uncut’s fluffy image, about their Daily Mail-friendly, eminently reasonable invocation to hate the player (Philip Green, say), not to hate the game (capitalism). Because everyone involved knows, perhaps with a nod and a wink, that their work is about so much more than one man’s tax evasion. The activists I’ve met across the student and broad left movement would agree it’s not enough to dispense with the rotten apples and then get on with business as usual. ‘Business as usual’ has created this proto-Utopian generation: because it will leave them worse off than their parents, incredibly – beset by unemployment, saddled with debt, with no prospect of being able to get on the property ladder, and no hope of a sustainable pension. The ‘Capitalism IS Crisis’ banner at the occupation outside St Paul’s Cathedral is telling.

Jamais Cascio, a leading thinker on geo-engineering and scientific futurology, recently coined the term ‘charismatic megafutures’, which he defines as ‘grand visions of tomorrow that are more evocative than they are meaningful’. While obviously no-one should strive to be lacking in meaning, charismatic megafutures are exactly what we should be looking to create; if they are more evocative than they are workable for now, then so be it. This is the necessary next step in the emergence from the shadow of capitalist realism; first, to be able to imagine another world – then, to create it. 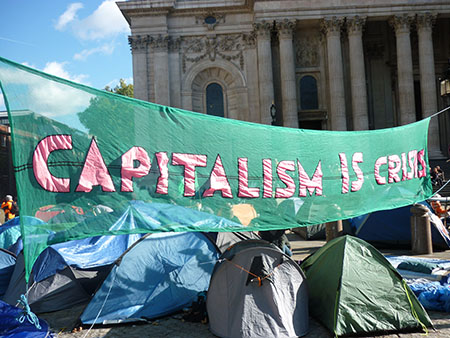 The 1980s race riots in London, Birmingham, Leeds and Liverpool, for better or worse, accelerated multiculturalism, and slowly but broadly improved racial tolerance. Sadly, the causes of the riots that spread across London in early August remain as firmly entrenched as before: economic and existential malaise, and a political class that has given up on large parts of the population – at worst, that despises them. More riots are not inevitable, but they are certainly likely, according to youth workers in Haringey in North London, where they first began. Research published last year by the Social Science Research Network, covering unrest in Europe during the period 1919–2009, found ‘a clear link between the magnitude of expenditure cutbacks and increases in social unrest. With every additional percentage point of GDP in spending cuts, the risk of unrest increases.’ Eighteen months since the coalition government came to power, the cuts still haven’t bitten their hardest yet, the private sector is not providing the jobs the Tories promised it would (by definition, it wasn’t their promise to make), the real unemployment figures are worse even than those officially published, because of the precariat and part-time employed, and the European economy is on the brink of totally capsizing again. The strike/occupy/smash/depose memes just keep pouring in, from north Africa to Athens to Madrid to Oakland. There will only be more game-changers.

In the media narrative around 2011’s British public-sector strikes, the so-called Winter of Discontent (1978–9) is often invoked, when bin-bags piled up in the streets of London. But the historic example we should be looking to is the lesser-known General Strike of 1842, which began over wage cuts in mills, mines and factories across Britain. The first General Strike in any capitalist country, 1842 points to how specific grievances and forms of direct action might be threaded into an irresistible grand plan. The struggle against intense economic hardship and exploitation was assiduously linked up with the Chartists’ political demands: for an end to plutocracy and the extension of electoral suffrage to all working men. This is the kind of propositional protest we should be moving towards.

More than a year after the storming of Millbank, ‘This is just the beginning’ – the slogan which rang out that day, and which appeared on the front pages of the next day’s newspapers – is still one of the most important memes of the entire movement. The shattering of the glass in Millbank Tower was, as I have argued before, the shattering of capitalist realism – the intellectual malaise identified by Mark Fisher, in which it is accepted that there is no alternative to capitalism. Millbank was the beginning of a generational epiphany – perhaps the first in the UK since 1968 – that another world might be possible. It marked a psychic transformation into thinking beyond capitalism, one whose timing could not be more appropriate.

This can be an optimistic moment. New definitions of democracy, and entire new political economies can be forged from the ashes of Lehman Brothers, and from the ashes of the London riots – shaped from the ground up. Many of the remarkably well-read young people I’ve met on protests already know their revolutionary theory and history better than their tutors did. They are smart and angry, and are being denied work, homes and pensions. Since Millbank, they’ve started to discover what they’re capable of. Paul Mason, BBC Newsnight’s political editor, has argued that the primary catalyst connecting 2011’s global crises and uprisings was exactly these people. ‘At the heart of it all,’ he wrote in February, ‘is a new sociological type: the graduate with no future.’ What he might have gone on to say is that well-educated young people with no future are liable to create one for themselves – and perhaps, for everyone.

Dan Hancox lives in London and writes about music, politics and cities for The Guardian, Observer and others; his books include Inner City Pressure (William Collins, 2018) and The Village Against the World (Verso, 2013).

Reviews
Sara Deraedt’s Investigations into the Fabrics of Our World