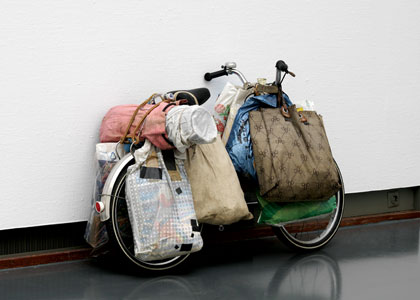 Billed as a retrospective, this exhibition of 20 or so pieces was not the accumulation of all sizes of traps, shaggy dog stories and absurd riddles one might have anticipated from a two-decade round-up of Andreas Slominski’s work. But despite its concentrated form – there were fewer works on display than in his show at Frankfurt’s Museum für Moderner Kunst last year, and the majority of them were from the last two or three years – the exhibition was a good sampler of the various avoidance mechanisms, convolutions and wilful contradictions we have come to expect from this German artist. It looked like a prototypical museum show: some bold formalist sculptures, a series of paintings in imposing frames, a couple of Conceptual conundrums cleanly presented in outsized vitrines. A bit of Minimalist functionalism, a ready-made, even a live performance. There was something here for every kind of art lover. Or was there? As ever with Slominski’s work, categories prove to be slippery, conceptual banana skins for the complacent viewer.

The first work encountered was a small, old-fashioned enamelled cash box customized with a carefully labelled locking system to become a Special Earthworm Trap (2006), although the reasons for wanting to lock up an earthworm remain unclear. The only other trap here, for wild boar, also natives of the German forest, was a huge, elaborately construed wood and wire construction with a pleasing resemblance to Bruce Nauman’s Double Steel Cage Piece (1974), on view elsewhere in the museum. The question is how literally we allow ourselves to take these pseudo-functional sculptures. The two traps taken, for instance, in conjunction with the pile of forked branches and their accordingly Y-shaped stove in the adjoining room (Oven for Burning Forked Branches, 1997), could coax up a convincing woodland scene. Similarly, the stacked paint cans in Paint for Coating the Red Sand Lighthouse (1999) are able with great economy to ‘paint’ an image of the iconic red and white striped lighthouse in the mind’s eye. The light (and sometimes dark) humour of Slominski’s works draws you in immediately. Their sculptural confidence, along with their explanatory titles, implicates you further, activating a mental journey by inviting you to join the dots. But during this act of inadvertent analysis a mass of nostalgic, cultural or art-historical references rack up. Unsure whether or not to take these seriously, your position is vulnerable, and once you reach the full absurdity, or horror, of your conclusion, you are left stranded. This is particularly the case in a work such as Lucky Pfennig (Found on 16-05-1996 on a Mole Hill in Buchenwald) (1996), a tiny, battered penny sitting inside an imposing glass and steel vitrine. When you notice that the Reichstag pfennig is from 1943, and recall that Buchenwald was a Nazi concentration camp, the horrific implications of the story unravel.

There is almost always an absent, often performative element inherent in Slominski’s work, an aspect that has either resulted in the object we see (such as the clunky formalist Sculpture Welded Under Water, 2006, incorporating a rusty anchor which was in fact welded under water, the anchor still attached to its ship) or that determines its form (the extension panel and fold-up ramp disguised inside the white Minimalist wardrobe in Wardrobe for Lover in Wheelchair, 2006). It is up to the viewer to fill this void through a mental re-enactment of the missing misè-en-scene. In this sense the objects function as stooges, sculptural stand-ins for the thought process they insist on from their audience.

Perhaps most surprising and perplexing are Slominski’s ‘paintings’. Not oil on canvas but reliefs sculpted from slabs of polystyrene and spray-painted with a flourescent palette, they do not easily disclose themselves through narrative unravelling, being obscured rather than explained by their cryptic titles such as xHBy93 (2006). The accomplished handicraft of their surfaces, loaded with polystyrene renderings of rustic bric-à-brac, pizza slices or references to other art works (his own and others), jams our highly tuned Slominski antennae. Are we supposed to search out narrative here? Whereas most of his works appear simple but turn out to be complicated, these appear complicated, virtuoso even, but are actually rather simple, almost negligible. This time they are stand-ins for paintings; they look like paintings after a fashion, mounted here in impressive aluminium frames, but resist being read as the real thing.

Slominski’s works pivot on a smart reversal of expectations that upsets his audience’s stable footing. At their best, they perform a pantomime existentialism, not unlike Fischli and Weiss’ philosophical musings in the guise of a bear and a rat in Der geringste Widerstand (The Point of Least Resistance, 1981). Cloaked in slapstick humour and absurd exaggeration, they trick us into total engagement before whacking us with their real preoccupations: life, love, luck, death, survival.