As one critic recently noted, writing about Andro Wekua is not an easy task. The artist’s multi-part installations featuring cast mannequins, abstract sculptures, figurative painting, drawing, collage and film dispersed throughout carefully conceived environments are overwhelming in both scope and psychological content. At one level, sprinkled references to the artist’s past evince a complex, personal symbolism rooted in Wekua’s childhood in Soviet Georgia. The film Like a Lily in My Back (2003) for instance, is largely composed of found footage from the artist’s childhood, including scenes of his father’s funeral – loaded subject matter, to say the least. Yet Wekua’s sources remain for the most part obscure, and his method of layering paint and blurring filmic images is equally obfuscating, suggesting that his charged iconography may function to evoke less a specific past than the commonality of all private, imagined lives.

The uneasy co-existence of openness, on the one hand, and withholding, on the other, runs throughout Wekua’s work, nowhere more dramatically than in his signature cast-wax mannequins. Three of them occupied the galleries at his recent solo exhibition at the Gladstone Gallery in New York: a young girl, with arms folded and eyes downcast slumped in a chair (Gott ist tot aber das Mädchen nicht, God is Dead but Not the Girl, 2008), and two hunched-over figures, their heads buried in their arms and long, dark hair (Sneakers 1 and Sneakers 2, both 2008). These latter were distinguished by divergent motifs painted on their backs – a blue target and harlequin pattern respectively – and by a comedic mask attached to the back of the second figure’s head. As in all Wekua’s installations, the contrast between the mannequins’ postures and their presentation is discomfiting. Formally and psychologically reserved, the figures are nonetheless theatrically presented: the girl’s chair sits on top of a low platform inside a glass case, which is in turn supported on cinder blocks, while the other two figures sit on tables balanced on cast aluminium palettes. Platforms on top of platforms, frames, curtains, masks and elaborately coloured backdrops: these are the devices Wekua uses to focus attention on his objects, as though forcing them out of their desired isolation. His traditional working method – he casts live models in wax – renders his personages both strangely lifelike and spookily artificial.

Wekua’s figures may appear introverted, but they are far from self-contained. Instead, they embody what the literary critic Leo Bersani has defined as a kind of dispersed narcissism whereby isolated individuals find themselves replicated in the outside world. Wekua’s mannequins are less discrete entities than variations on one another. Sneakers 1 and Sneakers 2 are the most obvious examples of a consistent transmigration of forms throughout: the same sneakers appear on all three mannequins, while a floating black hand, pictured in a collage entitled Don’t Touch (2007), assumes three-dimensional form in the ceramic sculpture Holding (2007), where it dangles from the hand of a white standing nude. Similarly, a house overlooking the sea in Like a Lily in My Back returns in his wonderfully eerie film By the Window (2008). A boyish mannequin with eyes blocked out sits with feet propped up on a table, recalling the unsettling figure idly passing time in Get out of my room (2006), an installation currently on view at the 55th Carnegie International. The same mannequin appeared in two collages included in the Gladstone catalogue, which functions less as the show’s index than as an additional component, featuring a short story by the artist in which pronouns shift and reclusive characters blur. Migrating footwear and drinks cans feature prominently. It is as though, in Wekua’s world, we are paradoxically joined in our solitude; we are alone together, privacy existing only in relation to the public from which it seeks protection.

Over and over Wekua hints that there is no such thing as life unseen. Rather, the images we have of ourselves and the world around us are always already framed and edited. Even our private moments are subject to an organizing gaze. This is most apparent in his films, which frequently shift between static and live-action shots as though suddenly to halt reality’s flow and reveal its inherently constructed nature. Like a Lily in My Back begins and ends with framed photos of Wekua’s family slowly shifting to encompass live footage in such a way that it is unclear which is which. The haunting Neighbor’s Yard (2005) travels from reality to fiction in three-and-a-half minutes, beginning with a typical sunset viewed through a parlour window and panning across a living-room to settle on a Fellini-esque paper moon glimpsed through a rear window. The film concludes abruptly with two black and white static shots: an empty bedroom and a house by the sea. Devoid of detail, both images invite our own personal associations. Stilled, they also make us pause for just a moment. In the next instant the film begins again, and Wekua’s motifs are caught up in an endless circular motion (the seaside house recalls the cliff house in Wekua’s other films, while the sunset resembles the Georgian landscape pictured in the drawing Sunset by the Wall, 2008), inviting us in even as we remain fundamentally outside Wekua’s interior world. 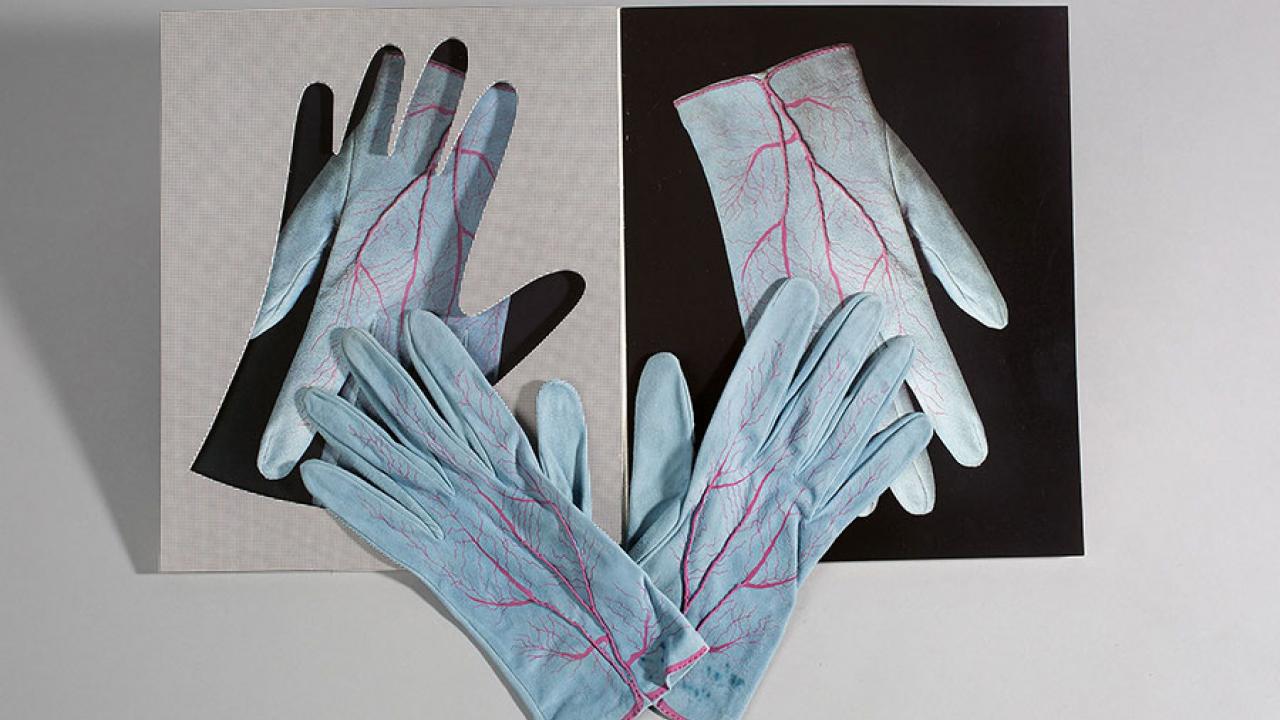 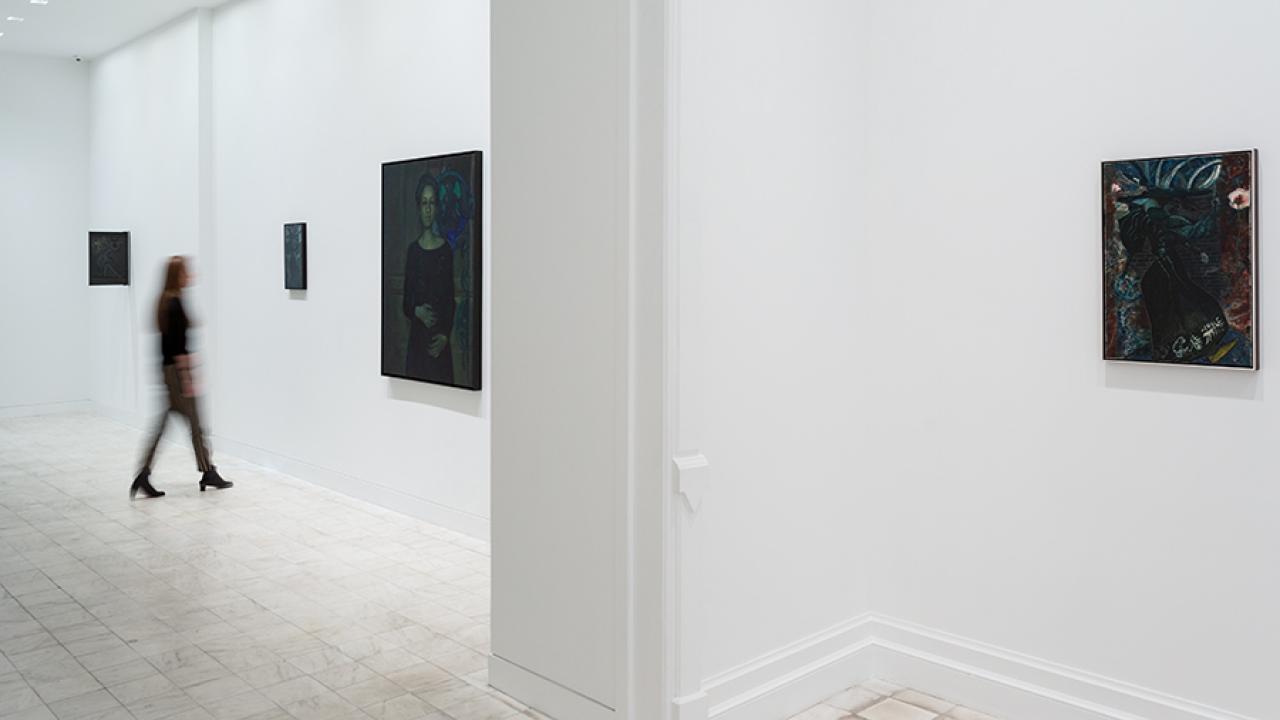 An exhibition at Gladstone Gallery, New York, shows the artist’s attempt to break out of step with time