On a music festival in Wysing, ‘Thingly Time’, the zigzag wave form of Charlie Brown’s jumper and Bedfordshire

CHRIS FITE-WASSILAK The music festival you organized in 2010 at Wysing Arts Centre, Cambridgeshire, uk, saw you build several stages for you and other artists to present performances on. Similarly, your exhibition earlier
this year at Cubitt functioned as a platform. Would you consider your practice to be dialogical?

ANDY HOLDEN Some works are, but others are more hermetic.‘The Dan Cox Library for the Unfinished Concept of Thingly Time’ at Cubitt was the product of tragic circumstances, through which I found myself in the role of caretaker or custodian of an idea. Dan was a close friend who I invited to curate my exhibition at Kettle’s Yard in Cambridge last year. He died in an accident part way though our collaboration. On the morning of his death he told me about his idea for ‘Thingly Time’, a potential concept we could develop together. The library at Cubitt contained all of Dan’s books, housed on bookcases I designed, combined with fragments of my previous pieces and placed upon carpets with screenprinted extracts from Flaubert’s Bouvard et Pécuchet [1881]. It also contained an exhibition-within-an-exhibition, a display of works dedicated to exploring what ‘Thingly Time’ might be, as well as hosting a weekly reading group dedicated to unravelling Dan’s embryonic concept through dialogue. However, other works – like The Cookham Erratics [2011] – are more introspective monologues, questioning my own impulses and why I come to see the world as I do.

CFW It seems that much of your work moves through slipping analogies, or what curator Tyler Woolcott calls ‘a whirlwind of metonymical references’.

AH In Laws of Motion in a Cartoon Landscape [2011], Tyler and I lay out a manifesto for an art after art history, based on the zigzag waveform of Charlie Brown’s jumper, the movement between knowing and not knowing found in Bugs Bunny and the space of the ‘plausible impossible’.It’s a lecture on cartoons, and also a cartoon of a lecture, set up as a way of explaining my work. However, I would say my practice, although often constructed through a horizontal, metonymic movement, also lends itself to the vertical axis of metaphor – particularly works like Lecture on Nesting [2010], where my father and I present a lecture on the materials and behaviour involved in the construction of bird’s nests, with my dad talking as an ornithologist, and me talking as an artist. This work hopes to engage metaphor at a meeting point between autobiography, ecology and ways of thinking about architecture and art production. 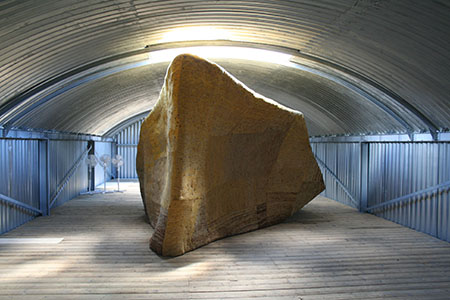 CFW Several of your projects involve a literal enlargement. This seems to extend to hyperbole as a metaphor for narrative – a metaphor for how we understand the incidental and how things accumulate to become more than themselves.

AH That’s central to the Pyramid Piece [2008], in which a tiny piece of rock I took from the Great Pyramid of Cheops in Giza as a child, once home and upon my shelf, became an object of guilt, enlarging in my mind, becoming a kind of Moby Dick. I returned the rock back to the Pyramid 15 years later, in an attempt to undo the original act, to try to understand the impulse of why I had wanted to take it. The sculpture itself was a knitted replica, enlarged 100,000 times: an attempt to depict the stone as it had seemed to me as a child, to turn it into a monument to a piece of a monument. Pyramid Piece explores the relationship between narrative and the object itself, each object inseparable from the set of circumstances that brings it into being. In The Cookham Erratics, I relate narrative to a glacier, picking up fragments as it goes, then depositing incongruities as it melts and can no longer support its load.

CFW I have an image of you recasting George Herriman’s Coconino County in the Krazy Kat cartoon as Bedfordshire, taking the elastic possibilities and mapping them onto a certain idealized, though not uncritical, vision of English landscape and domesticity.

AH I have an ambivalent relationship with Bedfordshire, having grown up here. The totemic plaster forms, made with Homebase paint ranges mixed with builder’s plaster, are part cake, part stalagmite, part pastel hangover. They hopefully could fit into any house in, say, Biggleswade, Sandy or Blunham [all in Bedfordshire]. These works were an attempt to make an object that revealed the time of its own construction, something heavy, ambiguous, fallen out of the cartoon landscape, but related to place in the same way that a bird’s nest is.

CFW Nostalgia is a strand that runs through your performances and objects. There’s a sense of collecting memories and both cherishing them and subjecting them to experiments –unravelling them, only for the thread to potentially be picked up by someone else.

AH My next piece is an investigation of the manifesto Maximum Irony! Maximum Sincerity (MI!MS) that I wrote as a teenager in Bedford. It was handed out at plays and exhibitions I’d put on with others in the ‘movement’. Nostalgia as a subject is a broad and tangled topic, and the mi!ms project will allow me to further think this through. As the screenwriter Dennis Potter said in his last interview: ‘We should always look back on our own past with a sort of tender contempt.’