In Eleanor, or The Rejection of the Progress of Love, two women repudiate the long-held expectation: get a husband, make babies

‘What, if anything, can I do in the time I have left?,’ asks Eleanor, the titular character of poet and translator Anna Moschovakis’s remarkable first novel, Eleanor, or The Rejection of the Progress of Love (Coffee House Press, 2018). The question is, I would wager, unfamiliar to no one. The privilege of youth is to feel that time lies ahead of you; that like a renewable resource we need worry less about wasting it, about whether we are wasting it. The curse (blessing?) of middle age is to perceive time’s abstraction in a new way: it appears suddenly finite, progressing more rapidly toward life’s only certain event. Amid this transition, the chaff of youthful ambition, of ideas and desires unrealized – or worse, maybe, realized but delivering little more than indifferences – can settle as a scrim over the scenery, impairing one’s vision. Now the question lingers, an ambient irritant.

When the novel opens, Eleanor is 39 and living in New York. She drifts amid overcast conditions: a lapsed PhD student, an adjunct professor of literature, a consummate reader, a writer who does not appear to spend much time writing. Her aspirations are dim. She is ambivalent about her lover with whom she shares an erotic connection but little else (they ‘were not perfectly matched, she was the first to admit’). Motherhood lacks appeal, the uniform certainty with which mothers ‘compared the before to the after of the unconditional love they felt for their spawn’ unsettling. Too cash-poor to socialize with better-paid friends, her social interactions dwindle; she texts. The atmosphere sweats news stories of trauma and upheaval in six-word summations. Eleanor meets them with anaesthetized dispassion, unable to ‘muster any of the outrage’ she expects to feel. The numbness extends to a recent trauma of her own, an event ‘that she had caused to happen, or that she had not caused but merely not prevented from happening’, which we never hear described. When her laptop is stolen, a document that has become the ‘site for a certain kind of thinking’ in the wake of the ‘thing that had happened’ is lost with it, and she ruminates on the missing paragraphs.

Unmoored, flittering Eleanor. One could reach for the metaphor that she is a character in someone else’s story, except that there is no need: Eleanor is, quite literally, the protagonist in a novel-within-the-novel of an unnamed author whose own story transpires concurrently with her own. Moschovakis oscillates episodically between the two stories – both Eleanor’s and the unnamed author’s – in the same austere, exacting prose, with Eleanor’s half narrated in a limited third person, the author’s in the first. Recently separated from her girlfriend, Kat, the author preoccupies herself with how best to describe her character Eleanor’s arc as she leaves New York and gives chase to her lost data, moving from a hostel in Albany to an ‘eco-minimalist’ commune, from Ethiopia’s Addis Ababa to the former home of French poet Arthur Rimbaud in Harar.

An eminent male critic, Aidan – ‘one of those men … who speaks only in subordinated sentences, developed theories’ – has asked to read the author’s manuscript. In a series of emails and encounters, they discuss ‘the function of Eleanor’s lover’ or the anxiety of conforming too closely to the traits of a literary zeitgeist (the use of episodic narrative, for instance) or why the author has chosen the pronoun she instead of I (‘a character who’s lost her data has lost her “I,”’ the critic theorizes). The exchange, with its self-conscious airing of potential flaws, weaknesses, criticisms, feels equally germane to Eleanor the novel.

‘I have a question for you about the title of my book,’ the author writes in an email to Aidan late in the novel. Eventually, we learn that she has too many titles in mind and is considering borrowing the form of the frontispiece from Clarice Lispector’s The Hour of the Star (1977) – a list of 12 alternate titles – ‘as a kind of homage’ (the two novels bear many thematic similarities). The list she sends to the critic, typeset in the same format as Lispector’s, includes the two titles of the novel we are reading. This is the first time the phrase ‘The Progress of Love’ appears; it is capitalized, including the T, and set in quotes. Although the novel contains no further discussion of the prospective titles, the style suggests it may be a reference to the short story by Alice Munro, first published in The New Yorker in 1985, about three generations of mothers of daughters on a farm in rural Canada. The phrase appears again some 40 pages later, this time because it is the title of the tetraptych painted by Jean-Honoré Fragonard, four canvases depicting ‘the four ages of love’ – flirtation, furtive meeting, consummation/marriage, happy union. The paintings were, once completed, turned down by the commissioning patron. This is one ‘rejection’, but the word reverberates in other ways: more obvious, perhaps, is that both Eleanor and the unnamed author have rejected heteronormative love and family-making; they have rejected what for a long time women were expected to do with their lives: get a husband, make babies.

There is, perhaps, one further rejection – Moschovakis’s. Western narrative forms have been developed to record and explicate male life (surely, it’s no coincidence that the narrative arc – inciting incident, climax, denouement – hews closely to the male sexual experience), and in a world in which women were denigrated. The novel, its conventional form, descends from this same tradition. As feminist historian Jill Ker Conway has observed, when they began to be told in novels and in memoirs, women’s stories were often shaped by the romantic myth, concluding with some version of Jane Eyre’s ‘Reader, I married him,’ as if, once married, their own lives ended, were subsumed by the man’s. Or stories with women protagonists centred on relationships between mothers and daughters. Shaped by the romantic or familial myth but not invariantly stamped by it – and certainly not wholly absorbed by it. These stories also expressed anxieties about the anonymizing and economic precariousness of being a woman; about entrapment in the domestic sphere, and, likewise, entrapment in the female body (the experience of childbirth was particularly fearsome).

Today’s literary landscape has no doubt evolved into something much broader. Yet how literary conventions derived from a culture that assumed women’s inferiority can grant integrity to the experience of women seems to be under question right now – both in Moschovakis’s novel and in English-language writing more broadly. The renewed interest in so-called autofiction, a form with which Eleanor shares much in common (the novel gives us clues but does not confirm that some version of Eleanor is the unnamed author is Moschovakis) seems to be one manifestation of this exploration. Moschovakis is in search of a way of presenting a woman’s life that is not expressed solely through family and bonds with others – that rebuffs inherited conventions while acknowledging that women are still labouring their way through the mare’s nest chaotically erected by patriarchy. For a clue as to what she might do instead, Moschovakis borrows from Rimbaud, a figure Eleanor studies closely in the novel’s third section. ‘I am present at the explosion of my own thought,’ he wrote in a letter in 1871. ‘I watch and listen to it.’ It is life that creates Eleanor, life that creates the unnamed author, rather than the other way around. This is in part why the Aidan’s observations cause the author to doubt her choices in the novel but ultimately don’t prove to be all that helpful – Aidan, so convinced of his own ideas, so buoyed by male authority, fails to recognize the nature, let alone the significance, of the rejection she is making. 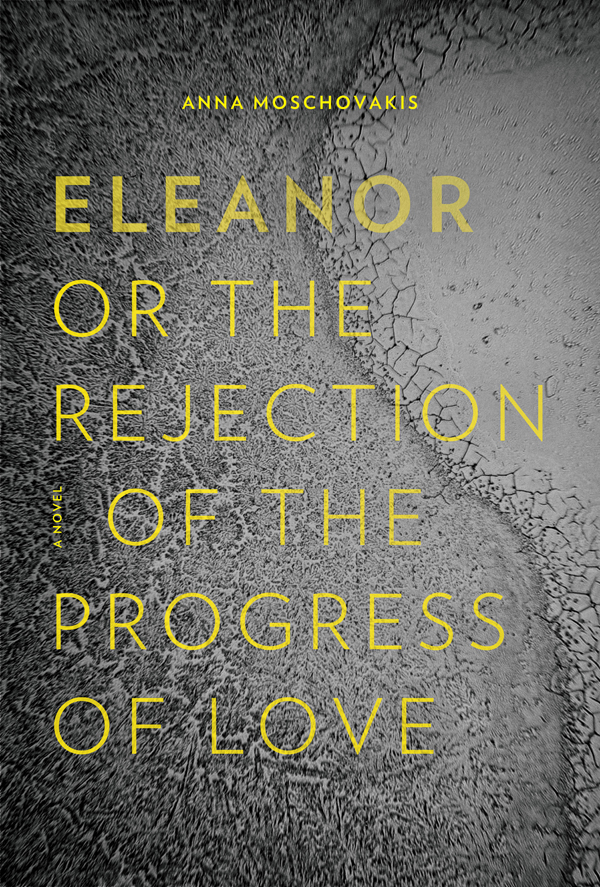 Anna Moschovakis’s Eleanor, or The Rejection of the Progress of Love, 2018, is published by Coffee House Press.

Sarah Resnick lives in New York. Her writing has appeared in n+1, Bookforum, Art in America, BOMB, and Triple Canopy, where she was previously an editor. Her writing was selected for 2017’s Best American Essays and a 2019 Pushcart Prize.