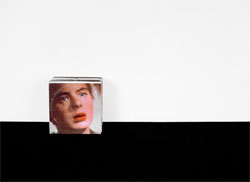 I once worked at a provincial bookshop that was somewhat overstocked with self-help flummery. Although I scoffed at first at the contents of the ‘Mind-Body-Spirit’ section, I realized later that it wasn’t so much the books that mattered to the clientele as the frantic semaphore of actually buying them. One day a wan young woman approached the counter, laden with guides to various relationship crises; the last through the till was, heartbreakingly, a slim volume entitled When Your Lover is a Liar. I thought of her again recently – and whatever domestic misery was unravelling around her – in front of Anne Collier’s Problems 2 (2005), her stark photograph of a cassette labelled ‘Problems: Side 1’. Against a plain white ground the grey tape has come undone and entangled to form a tortured body attached to the glum death’s head of the plastic housing.

Problems 2 conjures a certain melodrama. Who has ripped the tape out, and why? What nameless ‘problems’ await, unheard on Side 2? Along with a lightly worn and wry Conceptualism the distance between printed label and unspooling perplexity is the essence of Collier’s coolly comic and mordant practice. (In an earlier, related work a series of similar cassettes announces: ‘Fear, Anger, Despair, Hope, Joy, Love/Conclusion’.) Collier has spoken of ‘trying to bury everything as much as possible and focus more on formal things like abstraction and surface’; her photographs consistently stage this exchange between suspected emotional content and skilful lamination of those frayed feelings. In mirrored views of a calm sea entitled Jim and Lynda (2002) she photographs the place where her parents’ ashes were scattered. And in her most recent work she uses flat objects with emotional heft to punctuate anonymous, neutral spaces: they almost cancel each other out, but somehow something – eccentric, humorous, melancholy – is left to be desired.

The most resonant of these works is Crying (2005), in which a stack of LPs is propped at the junction of a black floor and white wall. So implacably neutral are the two planes that the image at the front of the pile seems to float on a flat horizon. The album cover is a close-up, a Technicolor film still, of a woman crying. I had to flick mentally through a sheaf of mid-century stars before identifying the blurry, androgynous face as that of Ingrid Bergman, and even then I got the film wrong. It looks like an unremembered moment from Joan of Arc (1948) – a saintly light softens her from behind; a distinct white halo turns out to be a circle worn away by the edge of the record – but it is, in fact, from For Whom the Bell Tolls (1943), and this is the soundtrack LP. Again you might guess at some sort of romantic trauma or domestic pathos: a bare apartment; a few bereft belongings too neatly arranged; the choice of image perhaps the last, pointed, passive-aggressive act of a departing lover. But once more Collier has subtracted so much that Crying seems as much an exercise in pure balancing of monochrome expanses and coloured punctum.

What it is not is an especially self-conscious take on the iconography of the LP: at least, not to the extent that you could exhaust the image by decoding the album cover. Collier’s use of record sleeves is less knowingly typological than, say, Christian Marclay’s elaborate arrangements. She reins in their significance, leaves them just shy of telling too much about sleeve-shot aesthetics, or about much at all. In Smoking 2 (2005) four 1970s’ album covers are again lined up against the wall. They are somehow not quite the right records: Boz Scaggs, a solo Bryan Ferry, Ralph McTell, Ringo Starr’s country album. All four men are smoking, and each sleeve has somewhere a patch or haze of blue-green. Otherwise they are unrelated, and one can only guess what occult links they might have for their imagined owner.

Collier uncouples the machinery of appropriation so that her found images seem weightless, holding their obvious meaning in abeyance in favour of some more seductive intent. The clearest example of this is Artnews (2005), which lines up five mid-1980s’ issues of the magazine of that name, all with cover shots of women artists. The last in the series is Sherrie Levine; in a sense all five have become Levines themselves, replicating their own images and reputations in the name of a collective, mock-corporate art-world identity. You could read Artnews solely as a comment on the media presentation of female artists at a particular historical juncture – the work itself in each case hidden by frills and big hair – but Collier gives us something less assured: a sense that even the over-inscribed portrait escapes typology and describes other, odder filiations with its fellows.