One of the extraordinary things about his video is the way that they instantly draw you in, opening a rhetorical chute where you slide past the usual outposts of spectator detachment 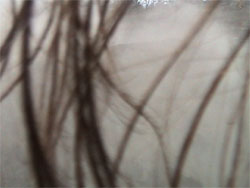 Actually, Anthony Burdin’s videos -– which often take the form of hallucinatory trips through desert landscapes and psychedelic car rides – do not draw you in so much as suck you in: as soon as the first image appears on screen you find yourself smack in the middle of it, immersed in an unknown universe with unfamiliar means of navigating it. Most contemporary art, and particularly video, addresses us distantly, as if from behind what theatre people call the ‘fourth wall’. Burdin’s videos, by contrast, connect with a kind of subcutaneous intensity. In very visceral terms they give you a sense of seeing through a strange set of eyes, taking someone else’s trip.
Most of Burdin’s work assumes the viewpoints of darkly disarming personas drawn from earlier audio performances related to his fictional KDOP radio station. (Burdin sees his videos as offshoots of his ongoing production as a ‘recording artist’, and much of his work ricochets off this enduring interest in the pop music industry.) Desert Mix, a persona whose vocal delivery recalls Linda Blair’s throatier moments in The Exorcist (1973) or the wheezing of an asthmatic derelict, provides delirious voice-overs in videos that take us through blighted Californian landscapes. In works such as Charcasum (2004) or his recent ‘Training Camp’ videos Burdin’s camera prowls scrubby, charred patches of no man’s land where the only artefacts of civilization are barbed wire and rusting debris. His camera restlessly tracks, swivels, tilts and zeroes in on arresting surface textures and topographical details, with a fluid, precise eye for visual incidents that indirectly recalls Gabriel Orozco’s videos. But Burdin’s approach is far more anarchic and unnerving. His skewed angles and disorienting shifts of focus re-choreograph the space he moves through in ways that cause us repeatedly to lose our bearings.
Frequently the camera looks out from beneath shards of Burdin’s dark hair, as though our point of view originated directly behind his eyes. It’s a signature Burdin touch, conjuring horror movie monster’s-eye tracking shots and underscoring an almost theatrical subjectivity. The vocal tracks take this aspect a step further with schizoid, stream-of-consciousness commentaries frequently interrupted by bouts of gasping and guttural choking sounds. Scrambled narrative hints turn up on some audio tracks – one ‘Training Camp’ video includes mention of ‘land-mines’ and ‘gas attacks’ – but the references remain elusive, and what emerges with startling clarity is a spooky paranoia, evoking the mutterings of burnt-out freaks and unhinged desert loners.
They are not, however, psychological in a personal sense. Instead, Burdin’s voice-overs psychically contaminate the images of landscapes so that they seem equally blasted and alien. And whether dealing with sounds or pictures, he engages in a repeated bait-and-switch, offering a glimpse of a legible hook before erasing the cues. This relentless, mercurial rhythm shuttles you between the recognizable and the indefinable in a manner that seems to switch different parts of the brain off and on, and which accounts for much of the work’s mesmerizing and disorienting impact.
The out-of-kilter character of Burdin’s videos is linked to their realization as live performances, improvised ramblings through a wide-open present tense. Whether starting with a landscape or a song, his works unfold in an open-ended fashion, leaving you unsure where you are headed next. In Voodoo Vocals: Agents of Fortune Cassette Tour (2002) he simultaneously plays the roles of madcap cinematographer, audio technician, stunt driver and crooner. Taking viewers on a hair-raising ride through a rainy city night, an off-camera Burdin sings over a boom-box playing Blue Oyster Cult’s 1976 hit ‘Don’t Fear the Reaper’. The rain-smeared windscreen transforms the glow of passing street lamps into luscious crystallized fireworks, a spectral light show accompanying a stoner anthem. Given the car’s rushing speed and Burdin’s blindly swirling camera moves, the threat of an imminent crash adds an underlay of suspense.
There is a lot of second-rate work these days that illustrates Goth motifs, wearing gloom on its sleeves with big winks for everyone. Burdin, on the other hand, articulates a complex and utterly novel California Gothic that feeds on the gap between fact and fantasy, between pop music conventions and the crazed dreams of fans. Like good old-fashioned Gothic literature, it reshuffles our sense of the familiar and the strange in creating a creepily unsettled aesthetic terrain. While it commingles campy allusions with intimations of catastrophic obsession, Burdin’s art is also compellingly romantic in its spirit of dark adventure, of walking and talking, in a way that destroys and remodels the world with each trip out.