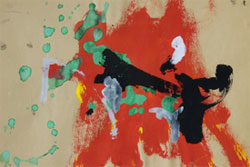 A sell-out international group show of abstract painters on London’s Cork Street. Some of the exhibiting artists had previously shown at the ICA in London and, in the 1950s, appeared regularly on popular television programmes to paint in front of the nation. Those who collected their work included Pablo Picasso, Joan Miró, Herbert Read and the Duke of Edinburgh. Accustomed as we are to the crossover between celebrity and artist, there may seem nothing unusual or noteworthy here. But this group of artists were primates of a lower order: Alexander (UK) was a male orang-utan, Betsy (USA) a female chimpanzee, Congo (UK) a male chimpanzee, and Sophie (Netherlands) a female gorilla.

The exhibition was organized in conjunction with the anthropologist Desmond Morris, who worked with Congo in the 1950s. The works on show were mainly gouache on paper or card, Abstract Expressionist in style and mostly colourful, save for a few monochromes. Congo was the most widely represented in the exhibition, and some of his more ‘accomplished’ paintings were striking and unsettling, given the knowledge of ‘who’ had painted them. Even though, or perhaps because, they didn’t ostentatiously resemble any particular artist of the period, they did convince. Composition on Buff Paper used a palette of aquamarine, thinned white and black over a deep red and yellow. The aquamarine, partly daubed, partly dripped, created a visual dissonance with the broad strokes of the red ground. Some of the works, several of which were titled Fan Pattern – Finger Painting on Yellow Card, were made directly with the ape’s hands. The emphasis on immediacy and directness of action dissuaded an aesthetic reading and enhanced the ‘animalistic’ and performative elements apparent in all the paintings: the uncannily familiar, atavistic primate hands broadcast to our homes via wildlife documentaries.

However, any attempt to write about the paintings in descriptive terms highlights a central problem with the exhibition: the work of these apes is inextricably linked to the period in which they were produced. It is unlikely the paintings would ever have been taken seriously as ‘paintings’ had it not been for the dominance of Abstract Expressionism in the 1950s. As Arthur C. Danto wrote in Painting by Numbers, when describing paintings produced in the 1990s during a collaboration between Renee the elephant and Russian artists Komar and Melamid, the understanding of such work is ‘the painting together with the conceptual and historical references, and the impish spirit of sabotage’. These ape paintings, it seems, were not produced in the spirit of sabotage. Here the interests of Morris the Surrealist painter coincide with the interests of Morris the anthropologist, linking the ‘automatism’ of Surrealism with the Expressionism of the ape artists. Komar and Melamid said of their elephantine collaboration: ‘Abstract Expressionism wasn’t invented by animals, but Renee is better at it than we are.’ Evidently Morris feels the same.

In the press release for the exhibition Desmond Morris describes how the work by Congo stemmed from a three-year period of research, begun in 1956, into the origins of aesthetics. During this period Congo produced 384 pictures, of which ‘40 or 50 paintings were under complete visual control by him [Congo]’. Morris claims the chimpanzee painted without reward, acting simply in a spirit of ‘art for art’s sake’, and that ‘it is the work of the apes, not that of prehistoric cave artists, that can truly be said to represent the birth of art’. Looking at the paintings themselves and their anthropomorphic titles, the evidence is less clear. From simple titles such as Composition to the more elaborate Painting with Bold Circular Loop on Red Paper and Composition in Black on Red Paper, we are confronted with human intervention, and the gap between handler and ape becomes blurred. Going against the conventions of rigorous, scientific research methods, Morris seems to have had premeditated results in mind and set out to achieve them. We are left wondering what the other 340 or so rejected paintings might have looked like. An article from the Daily Mail that accompanies the exhibition appears to support the view that an element of projection entered the relationship between man and ape. Morris is reported as saying, ‘Lots of chimpanzees given a paintbrush would go splish splash and make something, but we got past that phase until Congo was making purposeful paintings.’ And who decided when the painting was ‘purposeful’ or not? The answer, of course, is Morris, Congo’s handler, not Congo himself. As with Ham, the first chimpanzee launched into space in the 1960s, we know the ape was not at the controls.