Are You Ready for TV? 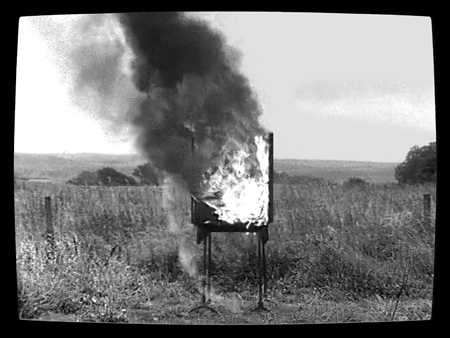 ‘Are you ready for TV?’ is a strange question to pose today (possibly even stranger in the context of an art museum), given that the television has been commercially available since the late 1920s and that it remains the major leisure pastime for much of the world. Yet the relationship between art and TV programming is a manifestation of the ongoing conversations and conflicts between high and mass culture, production and dissemination, product and audience. This may sound obvious, but it is particularly relevant given the way we live today – plugged into an omnipresent meta-network where life is mediated (or performed) by personal and public forms of broadcast.

Curated by Chus Martínez, ‘Are You Ready for TV?’ turns the galleries of the Museu d’art contemporani de Barcelona (MACBA) into spaces for broadcast, presenting more than 100 programmes (mostly made between 1960 and 1980) made specifically for television by artists and philosophers, alongside documentaries (such as John Berger’s Ways of Seeing, 1972), produced for networks both niche and mainstream. The exhibition is divided into ten ‘channels’ of programmes devised with artist Dora García – for example ‘What’s My Line?’ and ‘The Inveterate Joker’ – created to mirror the tropes of common TV formats. Each ‘channel’ is played on a separate giant television screen designed especially for the exhibition (mostly installed in one large space, alongside smaller screens allowing the viewer to select other programmes), forming a heady mix of satire, activism, humour, drama, irony, parody, pedagogy and documentary. This experiment follows several recent projects by museums, galleries and television stations, ranging from the excellent historical survey ‘Changing Channels’ at MUMOK, Vienna through to live broadcasts at artists’ space Auto Italia South East in London, to American reality TV show Work of Art: The Next Great Artist (2010). Yet given the Internet’s rapid media domination, this address of television by the art world also seems a little nostalgic.

At MACBA, programmes for each screen are listed in a guide, allowing viewers to navigate their own route. This system minimizes the curatorial direction of the sequence in which the works are encountered: no two visitors would ever have the same experience wading through the thousands of hours of footage on view. In another Postmodern twist, most are presented in the original language – some with Spanish or English subtitles, others without – creating a white noise of overlapping, multilingual soundtracks. The overwhelming nature of the exhibition mirrors the overload of visual information we experience today: a browser with infinite possibilities, just without a remote control or mouse.

During the 1960s and ’70s, artists seemed to gravitate towards working with television in to order reach a wider audience, to experiment with distribution systems and publics outside the confines of the gallery. Yet ‘Are You Ready for TV?’ emphasizes that even when artists intend to subvert conventional tactics, on some level they always have to inhabit the language of the medium or space. After many hours of viewing, my dominant memories were of the ‘stars’: Hannah Arendt smoked a lot; Michel Foucault was strangely attractive; the young Michael Douglas was an amazing self-parody; James Lee Byars was intense and a bit scary; Martha Rosler was (and still is) fierce; AA Bronson once had an awesome flat-top bouffant; Marina Abramovic´ looked great in hot pink; Martin Kippenberger’s French accent was endearingly terrible; and Joseph Beuys should not have been allowed to dance.

Perhaps these are observations more suited to a gossip column than an art magazine, but isn’t this the kind of stream of consciousness most of us have whilst watching television? ‘Are You Ready for TV?’ brilliantly reinforces the contrived nature of anyone’s persona when placed in front of a camera and, in doing so, deconstructs the performed reality of television. As Pierre Bourdieu said in his own programme, the chief motivation to appear was not to be heard but ‘to be seen’ (Pierre Bourdieu. Sur la television, 2001). Maybe actor James Franco’s recent ‘work of performance art’ playing himself as ‘bad-boy artist Franco’ in the US soap opera General Hospital (1963–ongoing) was actually a piece of post-Postmodern ingenuity, rather than unabashed narcissism.

The Internet has blurred the divide between producer and consumer in a way television and art never could, further complicating the relationship between high and mass culture and creating a more active audience. Nevertheless, viewers’ interests will inevitably be conditioned by their social circumstances, no matter how democratic the medium or where the work is presented. In a recent talk, artist Mark Leckey described the ‘network’ that we live in as a kind of ‘artificial god’ in the form of digital prosthesis. If seen through a Utopian lens, perhaps this has the potential to be a Beuysian dream – a form of participatory social sculpture. In these terms, by showing work that is part art, part television, and questioning the complexity of artists’ hopes for the possibilities of broadcast in all forms, this exhibition is extremely timely. After viewing it, as I read the raft of sound-bites copied into my notebook, the one that stood out was from James Lee Byars: ‘Do questions require more energy than other sentences?’ In a world where apathy (in part encouraged by decades of passive media consumption) can be as corrosive as violence, I think the answer might be yes.