How plants can help teach us to live ethically

Throughout the ages, artists have sought inspiration from living organisms. Since early cave art, every era has developed its own style and meaning for plant imagery, from ancient Egyptian drawings of – and on – papyrus to botanical studies, Dutch still-life painting, Japanese ikebana and, more recently, 20th-century land and generative art. Plants are mirrors of human growth and development; they manifest the same energetic properties that govern all life. As such, they have been aestheticized through a full spectrum of expressive possibilities – from the purely ornamental or festive to the deeply symbolic, ritualistic and devotional.

Recently, there has been a tendency for artists to incorporate living plants in their work, in a way that has affinities with performance practices using another kind of living being: people. What is the status of these organisms? Are they a material for artists to work with or are they collaborators making a creative contribution to the finished piece and, consequently, deserving of recognition? And can these questions usefully be posed about the use of non-human living entities in artworks? If so, what might the answers imply in terms of our relationship with our planet and the life forms inhabiting it in the Anthropocene? Characterized by the impact of humans on the ecosystem, our current geological era has been witness to the 6th Mass Extinction, in which thousands of species of plant and animal are lost every year.

When we talk about art – and plants – we tend to talk from our own point of view, as humans. Maybe it was to confront visitors with the inherent bias of this relationship that the Mexican artist Abraham Cruzvillegas filled some 30 triangular containers with London soil from public and private spaces for his recent Turbine Hall commission at Tate Modern. Cruzvillegas described Empty Lot (2015–16) as ‘sculpture made out of hope’: nothing was planted in the soil, but the area was brightly lit and the containers were watered, with the supposition that, in the six months Empty Lot was on show, latent forms of life would manifest. When I visited in early February, most of the containers had sprouted, some with recognizable species, such as potato and carrot, others with weeds. But the work also generated evidence of the passage and involvement of people, and possibly animals. Closest to the footbridge, I saw black seed-casings scattered on the ground, though a smell made me wonder whether they might, in fact, have been mouse droppings. A shrivelled orange peel and pennies for wishes had also been tossed into some of the containers.

Aside from the emotional rewards of growing plants and being around them, their impact on physical and mental health has been the subject of recent scientific interest. A Canadian study published last July in Scientific Reports found that having, on average, ten more trees in a city block improved how someone rated their health by a level comparable to an increase in annual personal income of USD$10,000, moving to a neighbourhood with USD$10,000 higher median income, or being seven years younger. Another study, at the University of Michigan, showed that even looking at pictures of trees had a positive effect. Artists are exploring the healing benefits of plants, too. London-based Brazilian artist Tonico Lemos Auad’s A moment of the sky/four humours (2016), a tiered wooden sculpture housing a garden of healing plants – such as lemon balm, valerian and lungwort – was made for the De La Warr Pavilion in Bexhill-on-Sea, a British seaside resort with a history as a restorative destination. Auad invited visitors to add their own medicinal plants in exchange for samples of those already growing there, fostering the therapeutic and relational benefits of gardening.

Our alienated sense of plant and animal life has caused a rift between humans and their so-called 'environment'.

The commodification of plants – as ornaments, cash crops or sources of energy – is a recurring topic in the work of London-based American artist Rachael Champion. Her monumental installation Primary Producers (2014) is a pebble-dashed landmass with sinkholes in which wild and specific strains of freshwater algae grow in pools of water. Cyanobacteria, or blue-green algae, were the primary producers of life on earth during what scientists have called the Great Oxygenation Event, 2.3 billion years ago. By pairing them with the reconstituted stone of pebble-dash – a popular but often-disparaged material used on modern British houses – she stages a rehabilitation of these two organic commodities. Champion’s democracy of materials brings to mind ‘the ecological thought’ propounded by philosopher Timothy Morton, in his eponymous 2010 book. For Morton, whose writing has been associated with the object-oriented ontology movement, this mode of thought involves acknowledging and valuing the interconnectedness of all objects and organisms. Morton discusses how the history of ideas has produced: ‘“Nature” as a reified thing in the distance, under the sidewalk, on the other side where the grass is always greener […] a special kind of private property, without an owner.’ Our alienated sense of the plant and animal life that surrounds us has caused the rift between humans and their so-called ‘environment’ that has produced catastrophic results for the planet and its species. Ecological thought – applied in science, poetry or art – would result in an ethically sound approach to human and non-human living organisms.

The London-based duo Cooking Sections explore the idea that nature is a human construct via the histories and economies of food. Cases of Confusion (50-40-20) (56-45-25) (55-40-20) (2015), three glass suitcases made to airline specifications and housing banana plants, alludes to current trade restrictions on soil and plants as well as to the 19th-century origins of the modern banana monoculture on the estate of the Duke of Devonshire. The Cavendish banana’s natural resistance to a fungus called Panama disease has made it the most popular species in a massive global industry. However, it is now at risk from a new and more deadly strain of the disease, which, along with the dearth of competing varieties, means that the threat of a banana-less world now looms. The symbiosis of plants and people is a key point for Cooking Sections, who see plants as ‘agents’: ‘They have genes, intelligence, they have been using humans to migrate and flourish and have been used by humans until many have gone extinct or become anthropogenic.’

If we attribute agency and other human qualities to plants, do we also have to extend the favour to inanimate objects? Natural Rubber Tree Clone (From a Series of 3: RRII 105) (2015), a sculpture by London-based artist Rachel Pimm, is a realistic simulacrum of a rubber tree made from latex and planted in a mound of recycled rubber chippings. Its foliage was cast from the leaf of a historic specimen in the Royal Botanic Gardens at Kew in London and it not only looks like a real tree but, shortly after it was put on show, started to behave like one. As the thin metal veins supporting its leaves reacted with the latex, the leaves began to shrivel and fall, as if the sculpture itself were dying. This incident recalls the notion of ‘vibrant matter’ – that inert materials and living bodies alike have a ‘vital materiality’ which is expressed in the influence they have on one another – put forward by political theorist Jane Bennett in her eponymous 2009 book.

It’s not surprising that Morton’s and Bennett’s theories have found eager proponents in the art world: the tenor of their arguments is reminiscent of countless discussions about the ‘vibrancy’ of artworks, expressed through their colour, mood, affect or transcendent properties. But how seriously should we take their invitations to change our lives? Artists are often lifestyle pioneers: think about the clichés of bohemia or loft living. Their work can also provide others with an opportunity to think through philosophical questions in material ways. By working with plants, these artists might help us realize that, beyond the short-term salving propaganda of recycling and hybrid cars, it’s time we scrambled the hierarchies between us and them, and considered other beings and things as  if they really mattered.

At Braunsfelder, Cologne, a series of painted rubber plants speaks to our need for calmness 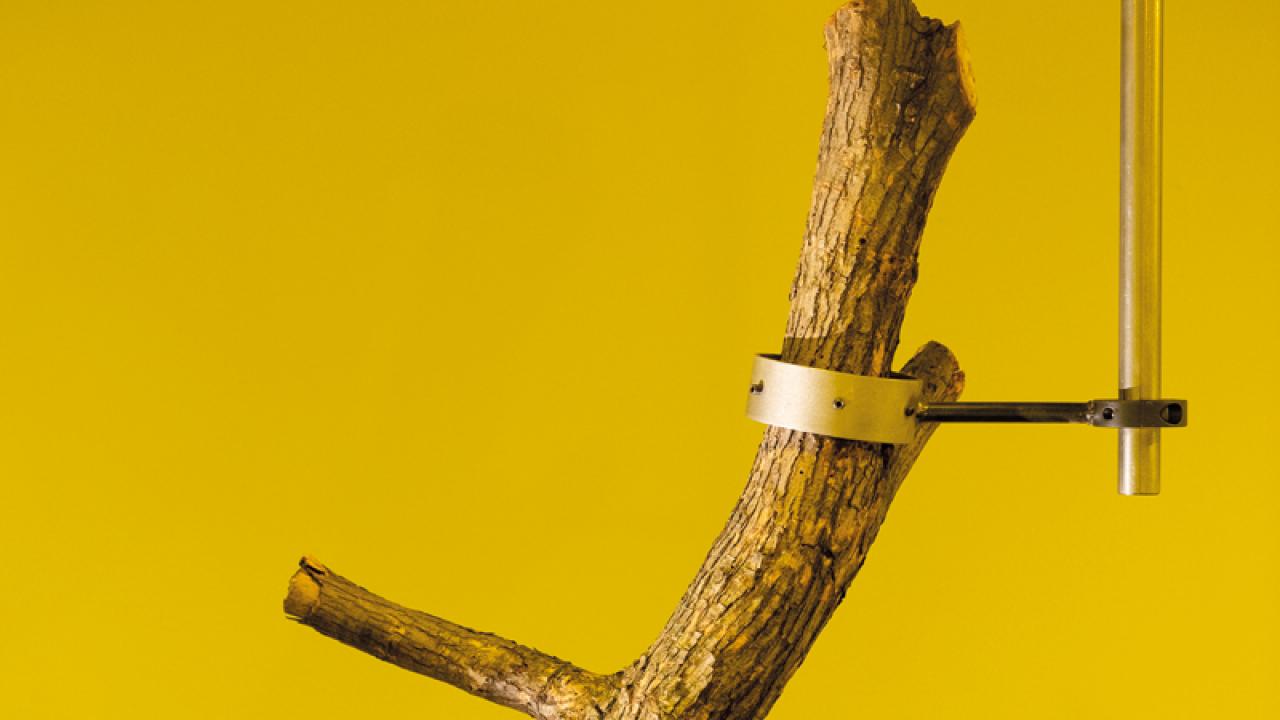 Profiles
Eating at the End of the World

From climate-resistant menus to colonial desserts, Cooking Sections ask us to think again about the ethics and economics of the food on our plates