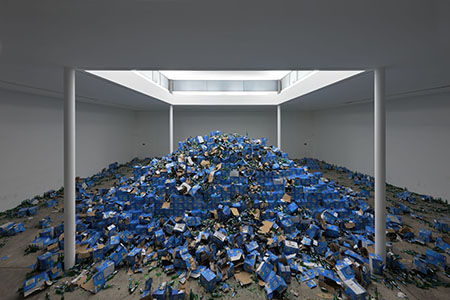 I was among the first people on the planet to see all the exhibits in Kassel at dOCUMENTA (13). Okay, so I didn’t catch the events in Kabul, Alexandria/Cairo and Banff, but most people didn’t even see everything in the Karlsaue Park. During the opening week, as I trudged around from gallery to lecture to screening to hypnosis, I kept meeting insiders who would ask me for insider advice. Yet the price to be paid for this diligence was high (as was the hotel bill after I extended my stay from three days to ten): I destroyed a pair of shoes, lost three umbrellas and ended up with a gigantic art hangover.

Unlike an alcoholic intoxication, an overdose of art is neither lethal nor nauseating. It is indeed possible to look at tonnes of art works without any dramatic signs of bodily injury or illness. Yet that sense of immunity is misleading, because there are after-effects that creep up on you in pernicious ways, unlike the intense and immediate impact of Stendhal Syndrome. Sure, I knew why my feet were sore after doing the mini-marathon of the Karlsaue Park, but it took me longer to decipher the source of the slight muscle cramp in my arm (lifting my camera to take pictures), my back (bending over to read wall labels) and my hips (too much sideways slouching while standing and looking). Indeed, the big puffy bags under my eyes didn’t come from my not getting eight hours sleep every night but from looking at art all day.

The physiological side-effects are nothing compared to the psychological ones, though. Alcoholic hangovers start the morning after with headache and regret, but art hangovers get going during the night. Exhausted, you easily fall into a deep slumber, only to be rocked by intense dreams. Mine were not really nightmares, nor reveries, but enigmas, which made previous dreams seem as complex as the daily crossword puzzle. Visually rich days produce not only vibrant dreamscapes but also a synergetic palette composed of fragments – a hue here, a tune there, a piece of cork, the uneven edge of a drawing, some fellow spectator’s perfume – which recombine with other art works and experiences in unexpected ways. You think you’re looking at art, but in fact your unconscious is busy re-curating the entire exhibition, if not making a few novel contributions, which can take minutes or months to materialize in the conscious with an ‘Ah-ha!’ or a ‘Duh!’ After I ruined my shoes in Kassel, I bought a new pair of neon pink ones, only to realize much later that my choice must have been influenced by the pink-dyed paws of the dogs in Pierre Huyghe’s dystopian park, Untitled (2011–12).

After more than a week of immoderate looking, a light state of aphasia tends to set in because you have immersed yourself in a world that is so completely visual – and so complete in and of itself without language – despite the catalogue, wall texts and dialogue or subtitles in films. Who needs to talk in a world of images? Looking at a lot of art may recall both the passive spectatorship and the numbing effect of watching too much television. Yet art works tend to be less attention-grabbing and more distant from the boredom, distraction and leisure that prolong many television sessions. Indeed, I have never looked at art because I was bored, seeking distraction or searching for fun, but I can’t really pin down why I look and will undoubtedly keep on looking to excess, even beyond the remit of my job. Soon enough, an art hangover – if unchecked – turns into a full-blown addiction. You just can’t draw the line at one exhibition; even art fairs are intoxicating; there’s always more art to see, and no one to stop you from seeing it.

Sure enough, a couple of weeks after Kassel, I jumped at the chance of doing jury duty to select the best works from an art academy exhibition. Faced with pieces from 300 students – each offering a selection – we three jury members took in more than 1,000 art works and still managed to remember our favourites. Our day started at 10am and, after an hour’s lunch break, we were expected to make our decision – and to write a press statement – by 4pm. With this intense level of intoxication, artists’ proper names disappear while the works themselves become ‘the string one’, ‘the one near that big door’, ‘the square thing with the ghosts’ or indicated merely by simple hand gestures and onomatopoeic sounds. Close to 4pm, when we were exhausted and speechless, we came upon an installation that revved us back to life. You just don’t get that kind of impact when you have one more for the road.

Finally, you reach the confessional stage and must admit to yourself or to your friends: ‘I am an artaholic.’ Alas, there’s no AA, let alone a 12-step programme to recovery. Then again, why seek relief from one of the only excesses that supposedly does you no harm?