An arts degree, some experts claim, is now one of the most desirable qualifications in the world of business. Yet cross-pollination comes with a high risk of failure – is it worth it? 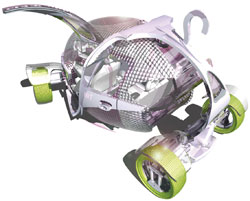 Five years ago the newly appointed vice-chair of Global Product Development at General Motors, Robert Lutz, described the strategic shift he envisioned for the company to the New York Times: ‘I see us as being in the art business. Art, entertainment and mobile sculpture, which, coincidentally, also happens to provide transportation.’ Whether Lutz’ remarks stirred their intended audience of car buyers may be in doubt, given that GM lost $10.6 billion last year, but they did please the cultural pundits, who heralded his bravado as the harbinger of a trend where artistic talent is trumping business acumen as multinationals adjust to a global economy.

In the Harvard Business Review, beneath the headline ‘The MFA is the New MBA’, (February, 2004), Daniel H. Pink – former speechwriter for Al Gore – proclaimed that ‘an arts degree is now perhaps the hottest credential in the world of business’. This played well to the inferiority complex that camps out in the art and design world. One blog titled BLANK provided this sanguine preface to Pink’s essay: ‘For aspiring and practising designers and artists out there who may feel a little intimidated by your client’s or manager’s fancy business degrees, take heart. Your art and design background is the future of the new economy.’ Pink speculated in WIRED that a creative economy was in the offing: ‘It’s not hard to see how outsourcing to India could lead to the next great era in American enterprise [...] Send the maintenance to India and, even after costs, 20 per cent of the budget is freed up to come up with the next breakthrough [...] What comes after services? Creativity.’ Pink’s ideas shadow Richard Florida’s belief in the rising creative class and are in tune with the assessment made by Harvard’s Robert Hayes: ‘Fifteen years ago companies competed on price; now it’s quality; tomorrow it’s design.’ Here Lutz is germane. The maverick who saw mobile sculptures speeding along highways applied his vision when GM sponsored a research project at MIT’s Media Lab, led by Frank Gehry and William J. Mitchell. The result was the Soft Car, featuring an exoskeleton frame and programmable outer skin. The Soft Car is only a token – GM is a long way from art – but Lutz’ core instinct, the relevance of cross-pollinating, was spot-on.

Interdisciplinary studies is the methodology of the day, kicking back 114 million results on Google. But is it capable of producing innovations to fuel a creative economy? Lee Fleming’s research, published in the Harvard Business Review (September, 2004), provides definitive answers: according to him, inventions based on conventional mono-disciplinary approaches far outnumber those from teams where disciplines are highly diversified, but the latter produce more ‘breakthrough innovations […] of unusually high value’. In the end it’s a question of risk-tolerance for failure. Another crucial implication is that the creative economies predicted by Pink, Florida and Hayes will be driven by interdisciplinarity because we presently lack the imagination to conceive of another methodology capable of producing such a high level of creativity.

A benchmark for this is IDEO, a company that, according to its website, designs ‘products, services, environments and experiences’. Its interdisciplinary teams consistently overrule the routine with alternatives born of cross-disciplinary research and development. Understanding IDEO’s success is an understanding of the difference between multidisciplinarity and interdisciplinarity. In the former, disciplines share a common theme without crossing boundaries to integrate methodologies or theories; in the latter there is collaboration based on an economy of borrowed ideas, stimulating creative hybrids. As Ronald Burt, from the University of Chicago, observes: ‘Tracing the origin of an idea is an interesting academic exercise, but it’s largely irrelevant. The trick is, can you get an idea which is mundane and well known in one place to another place where people would get value out of it.’1

Integrating disciplines is exceedingly difficult. Even if engaged in interdisciplinarity, people or institutions tend to settle back into their elemental expertise. Describing Gehry’s role in the Soft Car, Mitchell conceded ‘Frank will more than likely end up styling it’. Mono-disciplinarity passing for interdisciplinarity is incidental compared to larger questions that arise. What will be the value of assimilating naturally allied disciplines – exemplified by Rem Koolhaas’ conception of the IIT McCormick Tribune Campus Center in Chicago as essentially a graphic design project – once it becomes increasingly clear that the greater the distance between co-operating fields, the more meaningful the innovation is likely to be? Is this the sound of the door closing to artists who practise straight painting and sculpture, or to earnestly devoted ‘classical’ designers?

The late Joe Ranft, who led the Pixar animation studio, put greater value on an animator’s knowledge of literature than on their studio skills. ‘If they do not know the Arabian Nights, Dickens’ Great Expectations or Two Years before the Mast, they won’t work at Pixar. We don’t create animations,’ Ranft said definitely, ‘we tell stories.’ Are we educating artists and designers agile enough to perceive relevance – often furthest from their discipline – and convert it into new, hybrid knowledge, while managing the high risk of failure that comes with interdisciplinary innovation? I wonder. Promising schools exist: there is MIT’s Media Lab; Stanford has created the d.school with the help of IDEO’s David Kelley; and a majority of graduates from the Institute of Design at IIT are hired by corporations for their skills in strategy, marketing, research and design. While the visual arts are notably absent from such programmes, the Stockholm School of Entrepreneurship unites Sweden’s leading academic institutions in medicine, architecture, technology, economics, art and design in an interdisciplinary curriculum of graduate seminars and studios. In spite of these programmes, and the combined rhetoric of those 114 million Google hits, the art and design world appears averse to the deep-seated integration that would, for instance, produce innovations that could sit comfortably alongside Daniel Kahneman’s pioneering work in psychological economics. The citation for Kahneman’s 2002 Nobel Prize tells us he won ‘for having integrated insights from psychological research into economic science’.

What are the advantages in failing to be innovative? Universities that lag behind the frontiers of curricular transformation enjoy the advantage of being able to imitate success elsewhere without assuming the risk of innovation. If they don’t, then the risk is reserved for their students. Could it be true that significant segments of the art and design world – unable to negotiate all that it would take to initiate a creative economy – have been left on the other side of the widening gap between developed and developing disciplines? And what must they be thinking over there, hearing the ballyhoo about cars that are sculptures, the irrelevance of original ideas, valuing literature over studio skills, risk-tolerance and a new relevance for the MFA? They think they hear someone selling the sizzle rather than the steak. But with all their innocence and cynicism they too will have to answer: what are the advantages in failing to be innovative?

Ronald Jones is Professor of Interdisciplinary Studies at Konstfack, University College of Art, Craft and Design, Stockholm, and is the Centre Director for the Stockholm School of Entrepreneurship.