The Tropicália musician and ex-DNA frontman kicks of ‘Symphony’, a six-part performance series in Berlin 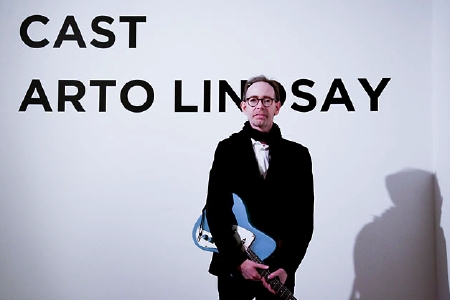 Can a sound alone be an art work? Can it be exhibited? Can an exhibition of sound fill a space as visual works of art would? These are some of the questions that the organization SOUNDFAIR are tackling with a new series of short events, inserted between the scheduled exhibitions in Berlin’s VeneKlasen/Werner gallery. The six-part performance series, titled ‘Symphony’, launched its first ‘movement’ with New York- and Rio-based experimental musician, prolific collaborator, Tropicália champion and renowned producer, Arto Lindsay.

Lindsay is no stranger to the art scene, having collaborated with artists such as Dominique Gonzalez-Foerster and Rirkrit Tiravanija (providing a live ragged guitar feedback accompaniment to Tiravanija’s flaming Crepe Suzette dinner party in ‘Il Tempo del Postino’), and staged parades in 2009 at the Venice Biennale and as part of the Haus der Kulturen Welt in Berlin’s 20-year anniversary festivities. But this is his first ‘exhibition’ as such, solely using sound.

Saturday evening in Berlin and the gallery is empty save for a Fender amp and effects pedals in the gallery’s central room, speakers arranged at intervals on the walls or floor of each the other three rooms, and a gathering, restless crowd. Just after nine, the crowd parted as Lindsay appeared, a slight but spry man in a black suit, sporting an electric guitar in an unusual shade of blue and the trademark horn-rimmed spectacles he’s been wearing since he began making music with New York no wave band DNA in late ’70s. Plugging in the guitar, he played a burst of his signature raw guitar, more noise than notes – a snatch of sound, no longer than 10 or 15 seconds. Putting the guitar down, he walked into the adjoining room, the crowd following hesitatingly, and stopped at the far side by a speaker on the floor, from which the same guitar sound then emitted, like an echo, or a conversational rejoinder. After approaching the next speaker, he read a line into a microphone from a sheet of paper in his hand: ‘I’m sure I put that letter in my pocket … and that the cheque was in the same envelope.’ This line, in turn, was repeated from that speaker. At the next speaker, he sang a short wordless tune, like a Tropicália call to arms; this sound again called back from the speaker he was standing by, as Lindsay pointed his microphone towards it. Retracing his path across the gallery, he went into each of the other adjacent rooms, the audience in tow like a loyal flock, and ‘fed’ each speaker, one by one, with a snippet of dialogue, a chuck-a-chuck-a guitar riff, a burst of song or a wailing sound.

The spoken words dangled an elliptical narrative that circled around a lost letter, a cheque, something hidden, something shameful, while the snatches of music hovered expectantly in the air. Now and then, unsatisfied with his flat delivery of a line, Lindsay would repeat it, hamming it up in a drawling Southern falsetto: ‘Thea doesn’t seem to be anywhea in this room to hahde what ah need to haaahde.’ But as each speaker repeated its accorded sound, it left the voice disembodied, as truncated from its source as the words were from their context, shaping an atmosphere cut through with ambiguity, speculation, forgetfulness. Where was the letter? Who wrote it? What was the cheque? Who was it for? Having given each speaker its voice, so to speak, Lindsay bowed and left discreetly, leaving the speakers to perform alone, each speaking its own line of text in sequence, like the ‘cast’ that the title refers to – an invisible cast as much in your head as in the space itself. In an impressively casual manner, Lindsay’s performance was the live creation of a multidimensional work that not only used sound to articulate the space in three-dimensional terms, but also built up a compellingly inconclusive narrative to occupy the space of the viewer’s (listener’s?) mind.

Revisiting the gallery some days later, empty again save for the speakers, I was pulled along by their sounds to retrace the steps of the original performance, plotting out the gallery space while attempting to catch and make sense of the spoken words, or locate the musical fragments. The stark visual character of the piece, and its looping but ever enigmatic nature was a powerful start to SOUNDFAIR’s ‘Symphony’, and true to its difficult aim to create a place of intentional listening and ‘heightened hearing’.