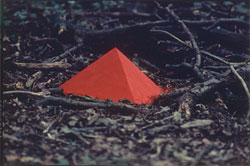 Tacita Dean’s work delights in spinning a yarn or following a trail. This pleasure was clearly manifest in her curatorial project ‘An Aside’ – a hothouse of suspicion and bluff that festered with an off-key atmosphere of wayward anthropology. Although the accompanying catalogue is a plot spoiler – Eric Rohmer, Gérard de Nerval and Friedrich Fröbel enter the conspiracy – it gives yet further licence for her rampant speculation and what in Italian is called dietrologia, literally ‘behindology’. Here the vintage German typewriter that’s the star of Rodney Graham’s astonishing film Rheinmetall/Victoria 8 (2003) looked as sinister as an Enigma cipher machine (coincidentally, the Rheinmetall company made arms for the Third Reich), before its dusting in snowy flour effected a white-out, a cover-up or buried news. And did the two uniformed farmers spreading straw on their field in Sharon Lockhart’s NO (2003), like dodgily disguised undercover agents, have a malicious motive for the uncanny ordinariness of their ritual? Like faces in the clouds or the Virgin seen on a burnt tortilla, Raymond Hains’ two lacerated poster works could have harboured veiled visions. Photographs of cryptic rocks (Eileen Agar) and tree stumps (Paul Nash) from the 1930s shared a similar enthusiasm for anthropomorphism or supernatural communication, while the very title of Nash’s cranky painting Event on the Downs (1934) sounded like the artist had witnessed further anomalous experiences.
With a gallery to itself, Lothar Baumgarten’s Da gefällt’s mir besser als in Westfalen, El Dorado (There I Like it Better than in Westphalia, El Dorado, 1968–76) was the first work that Dean chose and was the mother lode of the exhibition. It comprises a sequence of almost 200 slides with a soundtrack evoking a tropical wilderness where insects incessantly chirp and birds squawk an ominous ritual music. Images of dappled foliage and swampy thickets are either blurred or desperately hard to decipher. Here, a floating log might be a crocodile and copulating snails appear threatening. This is the dark jungle of the colonial imagination, the same that defied Klaus Kinski’s characters in Werner Herzog’s Fitzcarraldo (1982) and Aguirre: The Wrath of God (1972) and, although found a continent apart in reality, might host Rafflesia, the giant flower with the stench of rotting flesh depicted in one of Thomas Scheibitz’ drawings nearby (Untitled, 1993–2004).
Thomas Schütte’s glazed ceramic Hund III (Dog III, 2005) – something between a dachshund, a turtle and a Moomin – could be a model of a mythical creature said to lurk, like a gormless Chupacabra, in such a hallucinatory forest. Likewise Baumgarten’s Mosquitoes (1969), with their bread bodies and quill wings, are like hasty reconstructions of monster bloodsuckers. Of course, the artist’s El Dorado slides were not taken in the tropics but rather at a polluted stretch of the Rhine. Fischli and Weiss’ Son et Lumière, Le Rayon Vert (Sound and Light, The Green Ray, 1991) attempted a similar transubstantiation, though with comedic chutzpah. A pocket torch, a ‘cut-crystal’ plastic cup and a motorized confectioner’s turntable are employed to represent a rare atmospheric phenomenon in which the rays of the setting sun momentarily flash green.
Other works too performed as double acts or seemed to conspire among themselves, notably a cluster of heads. Joseph Beuys’ innocuous-looking bronze Portrait Bust (1947) stared at Walther Brüx’s own Portrait Bust of Joseph Beuys (1946), near the window of the west gallery, as if each disembodied head were trying to out-shaman the other. In the corner of another gallery Marisa Merz’ Deux Têtes (Two Heads, 1983) – tsantsa-like rudimentary clay skulls on a sleek paraffin base – seemed to be the product of painfully beautiful decapitations. Studies for a Portrait Bust of Isa Genzken (7.12.1990) (1990), a scribbly little pencil drawing by Gerhard Richter, looks as if the artist had been fantasizing about what Genzken, artist and Richter’s ex-wife, would look like with her head on a stick.
Group shows like this, which also included work by Roni Horn, Yvan Salomone and Kurt Schwitters, have a mood rather than an explicit theme; they imply that there may be a compelling order, but that it is necessarily just beyond everyone’s reach. And in the role of the curator, an artist has a much freer licence, as Dean amply demonstrated, to cultivate or exploit this potential for glorious spin, and never to let on if the viewer is being confided in or deceived.