BY Douglas Heingartner in Reviews | 03 MAR 07 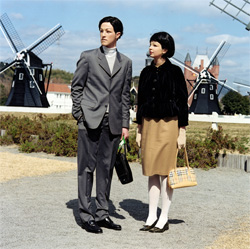 The interior of Amsterdam’s hallowed concert hall, the Concertgebouw, is flanked on all sides by the inscribed names of great composers. But the litany of W.A. Mozart, Richard Wagner and Pyotr Ilych Tchaikovsky is weirdly punctuated by lesser-known Dutch counterparts like Alphons Diepenbrock, J.J.H. Verhulst and Nico Schuyt – although their names are writ just as large in the gilded letters, as if the commissioners of the building believed they could elevate their home-grown talent by the grace of proximity.

Although this doesn’t relate directly to the work of Barbara Visser, the anecdote serves to illustrate one of the processes behind the myth-making that Visser is concerned with. It also borrows from a convention used in the book (not catalogue) published on the occasion of her first retrospective exhibition (which is not really a retrospective). Like many time-honoured artistic conventions, the retrospective exhibition has accrued its own hoary institutional clichés: the perfunctory publication and invitation, and the inevitable series of lectures and events. ‘Translated Works 1990 – 2006’ goes out of its way to reject the portentous historicization that such retrospectives imply, a gesture in keeping with Visser’s long-running interest in how inured we’ve become to believing what we see and hear. The exhibition does have the introductory text, the book, the invitations and the events, but each component has been designed with an eye towards reinventing the form, suggesting that the ‘retrospective’ itself has become an artistic medium.

But this is an exhibition after all, and dozens of Visser’s past works have been reinstalled. Yet they’ve all been somehow modified – translated, as the artist would have it – to illustrate how any site-specific work loses part of itself when re-exhibited in a new time and place. The introductory text has been sent through an Internet translation engine to highlight some of these deformations, and even the title of the book, ‘Barbara Visser is er niet’ (roughly, ‘Barbara Visser isn’t here’) makes use of a nearly non-translatable Dutch grammatical novelty. The book’s contributors were asked to refer as obliquely as possible to specific works, and to avoid citing Visser’s name altogether, and none of the pictures depict the works in their original settings, but rather as free-floating pieces that escape the reflexive legitimization of a stately artspace backdrop.

Many of these pieces precognitively augur recent cultural trends like reality TV (Visser playing herself in the hit Lithuanian soap opera Gimines, 1995), institutional critique (Visser putting her gallerists on a stage as they do their daily art-related work in Podium, 1993), re-photography (reproducing older works here as wallpaper), fake documentary (Interview met Duiker, 1994) or re-performance. Lecture on Lecture with Actress (2004), for example, is an ongoing series that keeps adding new layers to an original film of a lecture being given by an actress playing Visser: the scene has been re-filmed several times, with a new actress playing Visser each time and responding to the video of the previous performance. The circle will be complete when Visser plays herself during a final lecture at the close of this exhibition in April.

Visser is not immune to the myth-making machinations she exposes: several works here address the legacy of the Dutch designer and architect Gerrit Rietveld, a focus that unintentionally betrays her own cultural subjectivity. In Transformation House (2006), for example, she writes a letter to Rietveld wondering why his modular Schröder House from 1924 has since failed to find much resonance with later generations, and has instead become a sterile relic. Though Rietveld may loom large in Holland, he remains a minor player just about everywhere else, largely propelled into the design pantheon by the Netherlands’ boosterish culture industry. Many of Visser’s works call into question not only the roots of this kind of authority and authenticity, but also the willingness of an audience to believe what it’s seeing. The artist has elsewhere lamented how slow audiences were to cotton on to the fact she was being played by an actress in Lecture on Lecture with Actress, even though a video of the real Barbara Visser was being shown at the same time. Fortunately, ‘Translated Works 1990 – 2006’ doesn’t aim to expose gullibility, but rather to show how many gradients there actually are between real and fake, between original and copy; relativizing instead of dismissing out-of-hand what people believe to be true.