Bassam Al-Sabah is interested in power. Previous projects by the Iraqi-born, Belfast-based artist explored themes of war and geographical dislocation, referencing his own childhood experiences of the American invasion and his family’s exile from Baghdad. Yet rarely is the work overtly biographical or didactic in nature, instead opting for subtle storytelling and a deep reading of large themes. ‘I AM ERROR’ at Gasworks continues Al-Sabah’s use of narrative forms to question identity, queering masculinity within a video game.

The exhibition presents four videos and two sets of sculptures across two adjoining darkened rooms. The main film, which shares the exhibition’s title, is projected against a large curved screen and runs at approximately 30 minutes, making it the artist’s longest moving image work to date. In it, we follow the ambiguous narrative arc of an unnamed male protagonist, who encounters strange characters – including a glittering dragon and a deep orange demon – along his journey. Figures sway through uncertain terrain, often floating disconnected from the ground. The protagonist’s mission is unclear, perhaps even to himself. Over the course of the film, he progresses from a partially clad weakened state to being adorned in a shimmering opulent armour. These new powers thrust upon him are too much, his movements overwhelm the 3D mesh that constitutes the landscape as digital fragments break off and spin away to reveal the void beneath. Such spectacle offers a curious inversion of the game’s own logic with the superhero more tragic than victorious. Is this what winning looks like?

‘... the world is collapsing, there is not much left to do…’ appears on the screen once the character crumbles, reminiscent of a ‘game over’ message, before the film loops back to the beginning. Such references play between gaming tropes, mythical overtures and dreamlike decisions. There is neither voiceover monologue nor dialogue, with the few appearances of text incorporating themselves into the visual texture of what is on screen. Yet, despite its ambient soundtrack, little is minimal about the world Al-Sabah is constructing. This is a carnivalesque tour through digital aesthetics – glitches, pixels, hyperreal renders – combined with camera tricks like lens blur that create a kind of physicality and a curiously ambient soundtrack of 8-bit music, distortions and echoes.

Each video shares the same world, heightening a stylistic choice as they bring attention to a distinct moment. The first encountered in the exhibition space shows a hyperreal arm swarmed by flies against a crisp greyed background; the next, oversaturated and out of focus, shows a body seemingly submerged in either a field or a shallow pond; and in the final, we see a figure struggle with the mysterious shapeshifting power that defines his journey. Accompanying objects include digitally sculpted pieces that reference and elaborate upon what is seen in the videos. Larger than life flies sit on the ground, the scale magnifying their every detail. An unglamorous giant disconnected Styrofoam head lies deflated, almost in agony, beside two bubbling, amorphous semi-legible figures.

Much of ‘I AM ERROR’ is surprising. Al-Sabah’s hyper-synthetic aesthetic is at times seductive but often repellent, exploiting these human-adjacent CGI figures to channel personal experience. Across the films and objects, the exhibition resists easy readings of the aesthetics of violence, power and an extractive relationship towards the environment; as much as we see scenes of destruction, the return and resilience of nature – particularly the flowers which sprout from the character – suggests resurgence, even tenderness. Al-Sabah’s articulation of identity shirks a comfortable narrative direction for something more complex, difficult to untangle and ultimately rewarding.

Chris Hayes is a writer based between Ireland and the UK with an interest in contemporary art and politics. 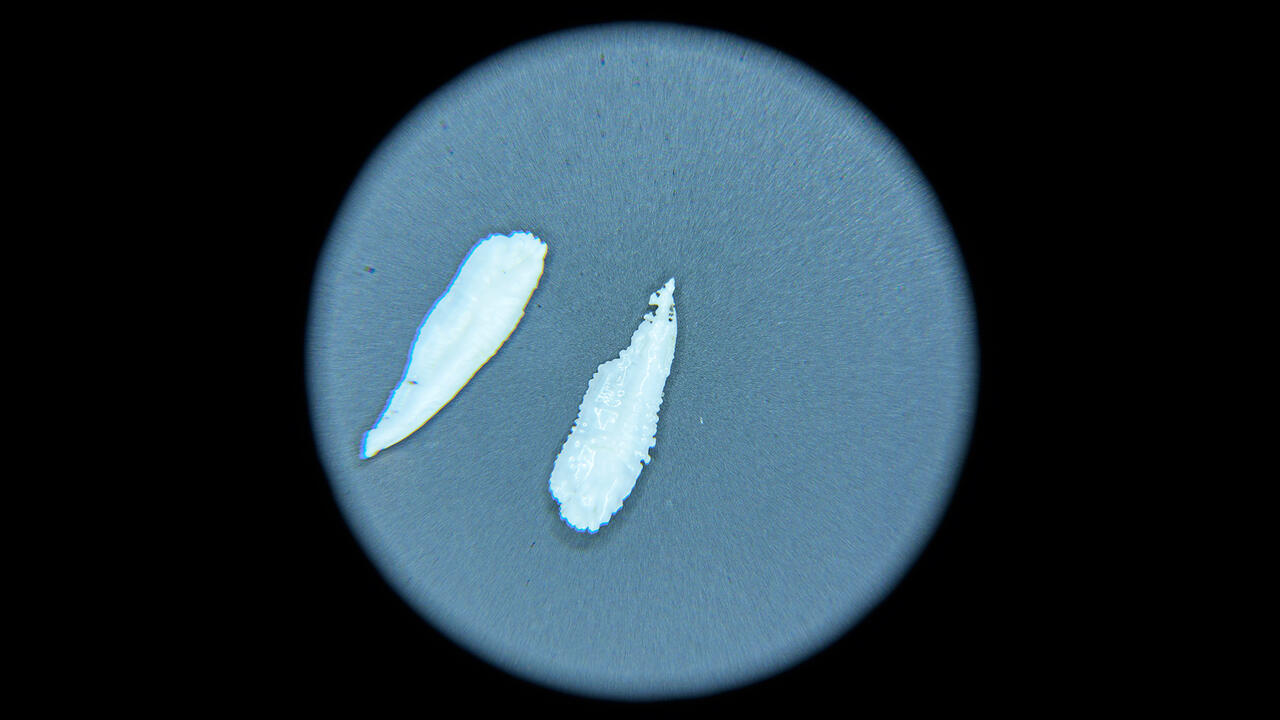