[member:membership-name]
[member:full-name]
VIEW MY DASHBOARD
BY Jonathan Jones in Features | 05 MAY 01

Bear in Your Soul 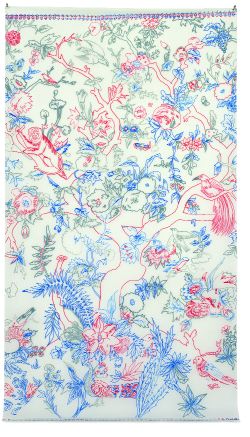 The 'cave' has velvet on the walls, a water bed with silk throw-cushions, and of course, a copy of The Wisden Cricket Almanack. A pipe and tobacco lie on the bedside table next to a DVD of Gladiator III (the teenies love Russell Crowe now he's getting visibly past it). It's always like this; the vulgar marriage of comfort and torture. They want it both ways, for him to play the most conventional of good fathers and to call him Daddy, even as they humiliate him, because it's the innocence, the nostalgia, that turns them on, but which also makes them want to do violence. He's full of suicidal thoughts, but there's not a drop left in his tear-ducts. He cried all night chained to a radiator in the dark.

The photographer smokes a roll-up while reading a copy of Bears. On the cover it advertises 'Older Furry Daddies Galore', and 'Hot Hairy Bear on Bear Action'. The girl who came to get him out of the cellar this morning, whose momentarily softer presence was belied by her use of the cattle prod, helps him to light his pipe. Does he want his newspaper? She skips across the room to get it. Not a real newspaper, of course, just sheets with nonsense scribbled on them - he is not allowed to know what week it is, or what country he's in. He's pretty sure it's Germany.

They look at him with a kind of awe, as he sits in the battered comfy chair and removes his Hush Puppies, then his smelly dressing gown. 'Fucking top hair monster!' says the photographer, who is about 17 years old, has tightly cropped blonde hair, and is wearing an orange jumpsuit. In their eyes he is a thousand years old instead of just 47. They look at his beard as if he were Michelangelo's Moses. In reality he sports only a couple of day's growth, which itches at night. He's never had a beard before.

He used to shave obsessively, ashamed of his body hair, its speed of growth. It was bad enough having such a hairy chest and back. He became warier as he got older, all too conscious of what maturity and hair, preferably with a little portliness thrown in, had come to mean in this society. But they found him anyway. Caught him buying real ale, offered him a lift home, and then slipped the sack over his head.

I am sitting in a chair in the office of an art gallery, and presented with a box of images downloaded from the internet. They depict mature, older men: all hairy, some very plump, all of them cuddly fellows. These are the men classified as 'Bears'. Why did the artist Stefano Ariente collect and publish these images? Surely, to demonstrate the endlessly plural nature of aesthetic and sexual choice.

In the next room paper wall-hangings are arranged like murals. Their myriad dots of colour are reminiscent of the pinpricks in cartoons for Renaissance frescoes; the dots which, when joined up, will make the old, pre-Christian gods come to life. These images of hairy men have something of the Italian Renaissance about them. That was a time of beards, of flowing locks, when men posed bare-chested for their portraits; a time when to be hirsute was to be virile. Think of Bronzino's portrait of Andrea Doria as Neptune, naked, his beard a frothing wave of power. Then again, all those satyrs and Pans with hairy legs; deities closely connected with the hairy saints, John the Baptist and John Chrysostom, who lived like animals. Perhaps that's what these Bears really want to be: wild men of the woods.

I look again at a picture of a bearded man with a big cock. The gallerist, a young woman, watches me. I imagine a community of hairy older men, photographing themselves, posting their images on crudely created home pages, getting in touch with Bears just like themselves. It's all oddly innocent, as fetishes go; a kind of self-love.

As I leave the gallery, it's possible someone in the building is playing Andy's Chest by Lou Reed: 'Well you know what they say about honey bears, when you shave off all their baby hairs; you get a hairy-minded, pink, bad bear'.

He has spent all day on the bed with a succession of men almost as hairy as himself, brought one by one into the room, some of them bruised and bloody, one of them bleeding so badly he fainted while fellating him as the photographer instructed. That poor sod is locked in the bathroom now, and the sounds of sobbing stopped half an hour ago.

He wonders how this happened, how the young got so bored with fucking each other. Perhaps it was when they all started to look alike, wearing the same street clothes, conforming to the same facial type, just like the Julian Opie posters the government put up on every street corner. Youth and looks are the sine qua non of social and economic power in the West today, but because of that, the young, smooth body no longer possesses any erotic qualities. Desire has shifted towards the mature men made redundant in their millions in the early 21st century, the men who come to do your garden or paint your house, who you watch from the window bending over the flowerbeds, arse-crack showing, as you listen to Moby.