Anarchy and fashion, identity, celebrity and a collaboratively written novel 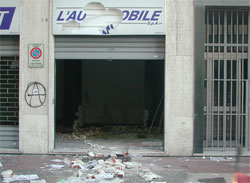 Bernadette Corporation has been operating as a fictional corporation since 1994. Working from behind the blank façade of its logo, core members (John Kelsey, Antek Walzcak and Bernadette van Huy) reorganize their internal structure on an ad hoc basis, frequently collaborating with others. They continually recast themselves in different guises, including a DIY underground haute couture label and the self-published magazine Made in USA (named after Jean-Luc Godard’s ‘worst film’), often working at the borders of art and fashion.
In 2001 Bernadette Corporation followed the anti-capitalist protest movement to Genoa for the demonstrations at the G8 summit. The resulting movie, Get Rid of Yourself (2002), centres on the accounts of the Black Bloc, a collection of activists and anarchist-affiliated groups that congregate at various events, often in order to disrupt mainstream demonstrations while preserving their anonymity with menacing black uniforms. Footage of violent clashes between armed police and activists is interspersed with glossy fashion images of ‘radical noir’, juxtaposing the bland passivity of high-capitalist fashion with a carnival of destruction and looting. A series of intercut vignettes feature Chloë Sevigny alone in an apartment, falteringly rehearsing statements made by the Black Bloc. Like Godard’s strategy of casting of Jane Fonda in his 1973 film Tout va bien to popularize his post-1968 message of class struggle, Bernadette Corporation employ a well-known actor to disseminate their cause. At the same time Sevigny’s slightly apathetic distance from the lines she reads serves as an acknowledgement of the limitations of an art project that frames the radicality of others.
Recently the group have taken their foray into the realms of fiction in their collectively authored novel Reena Spaulings (2004), which involved the participation of over 150 anonymous writers and took three years to complete. Embracing the Hollywood studio screenwriting system, they invited a core group of writers including Jutta Koether and actor/poet Jim Fletcher to thrash out a storyline, farming out areas of the text and assigning different functions of the overall scheme. Seamlessly edited, the book is a summation of multiple experiences of, and perspectives on, its main subject, New York City, seen through the eyes of its central protagonist, Reena Spaulings – a ‘material entity’ dreamed out of the city, a place that is ‘constantly exposed to the forces of communism’.
Reena is depicted as a continually morphing, interconnected, social, sexual being who moves through the city as it shapes her subjectivity; her body is an open, receptive, shared space, frequently coerced by others, ‘a site for things to take place’. After starting out as a gallery attendant, in a series of obscure escapades she is headhunted as an underwear model, converses with Slavoj Zizek at an A-list cancer benefit Strokes concert, hobnobs with Karl Lagerfeld in ultra-hip night-club Waste, discovers an addiction to loss and becomes embroiled in anarchist actions, at which point she momentarily changes her name to Marcks Engels.
The city also goes through a transformation. At one point it is devastated by a tornado that leaves behind it a trail of destruction, ripping though a gym of buff male models along the way. Spontaneous gang violence sparks up around the city and a virtual war zone of civil unrest creeps in, a kind of hallucinatory uprising of collective unconscious desire. While Reena seems only too happy to detonate a bomb for one of her ‘gang-guy’ mates, one gets the feeling she is not wholly committed to the cause. With the help of her agent she eventually repackages her rebellion into the planning of a song-and-dance riot ‘Battle on Broadway’, proving capitalism’s consistent ability to turn its own critique into fuel for its fire.
As with many of Hollywood’s committee-authored leading characters, there is a lack of depth to Reena’s persona. However, a literary masterpiece was never the ambition. Just as Godard sought with Tout va bien not only to make a political movie but also to make a movie in a political way, so this novel is more about the political connotations of the collective process of production than the final result. In the creation of a character whose ‘thoughts and actions are not spanned by any author’s mind’ BC play a game that follows the same lines of their own quasi-corporate front and their profiling of the Black Bloc’s refusal of political identity, subverting the capitalist fixation with ‘individualism’ and the art world’s need for stardom – a literal ‘getting rid of oneself’. At the same time, while BC’s fictional ‘incorporation’ knowingly forms a sense of mystique around their activities, it also keeps their political position ambiguous. As Reena’s agent Maris Parings says in the book: ‘it was first of all a question of emptying out the space behind the company logo, which functions as a sort of mask or fog bank behind which anything at all, or nothing, could take place.’