The changing face of graduate exhibitions 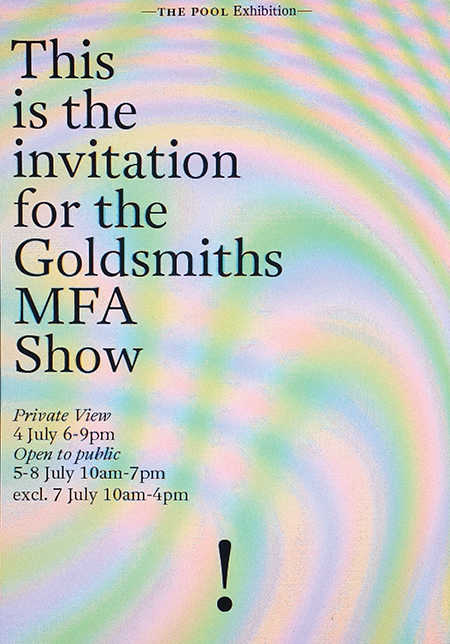 Each summer, between the months of May and September, British art schools stage public exhibitions of works by their final year undergraduate and postgraduate students, a practice that is echoed, with variations in pitch and timbre, in écoles, schulen and accademie across the world. While Britain’s first degree shows proper only opened in 1974 – the year in which the Council for National Academic Awards scrapped the rather artisanal-sounding Diploma in Art and Design in favour of full Honours and Masters degrees – comparable exhibitions have been taking place for far longer. Were a temporal exchange programme to operate between art schools in early 18th- and early 21st-century London, a student from the artist-led (and brilliantly named) Academy for the Improvement of Painters and Sculptors by Drawing from the Naked could negotiate the structure, if not the content, of the concluding term of a Central Saint Martins MA with relative ease.

So familiar is the degree show, then, that it’s easy to forget what a peculiar kind of exhibition it is. When else do artists find themselves obliged to take part in a group show in which the curatorial logic begins – and, in most cases, ends – with the decisions of a college admissions panel, taken months or years before? Where else are the works they display ascribed (the impossibility of measuring the numinous be damned) a precise numerical score? Then there is the matter of the degree show’s public. A humanities student’s thesis is read by his or her supervisor, examiners and, perhaps, a particularly indulgent parent, before being immediately deposited in the dim basement of a university library, where it remains untroubled by talent scouts from academic publishers, or the attentions of weekend history buffs or philosophy dweebs looking for the Next Big Thing. Degree shows, however, actively court an audience, often employing professional-grade marketing paraphernalia (the art press advertisement, the celebrity catalogue forward, the commemorative tote) to ensure that the ‘right’ people attend. Given the high concentration of gallerists, collectors, curators and critics in the capital, this is clearly easier for the London colleges than for those further afield. Significantly, a number of provincial art schools now tour their graduate exhibitions to hired spaces in the city’s more fashionable tourist districts, although in many cases this is as much about promoting their courses to potential new students – especially lucrative non-EU nationals – as anything else; holidaying teenagers from Seoul or Shenzhen are far more likely to stumble across the University of Loughborough’s BA show on east London’s hipster thoroughfare, Brick Lane, than they are on its campus in suburban Leicestershire.

Given that the degree show traditionally operates as a kind of threshold between the art school and the art world, between studenthood and maturation, it’s unsurprising that some celebrated British artists have used it as an opportunity to present works that test institutional boundaries – examples include David Hockney’s print The Diploma (1962), made in protest against the Royal College of Art’s refusal to let him graduate without first submitting a written essay (the examiners eventually capitulated in the face of Hockney’s growing fame), and Gavin Turk’s blue heritage plaque Cave (1991), commemorating his time studying at the College as though he were already a sculptor of national standing (Turk was not awarded a degree, although the ensuing press hoopla thrust him to prominence). If there is little evidence of such straining against the leash in this year’s crop of degree shows, it’s perhaps because it is now not unusual for students at some British art schools to begin building a profile well before graduation – for example, the 2013 Royal Academy Schools Show, which opens 18 June, will contain works by Eddie Peake, Mary Ramsden and Prem Sahib, artists who have already exhibited in leading commercial galleries and public institutions.

Increasingly, many art students are approaching the British MFA and its equivalents as a kind of ‘taught residency’ (something long offered by Amsterdam’s De Ateliers and Rijksakademie, neither of which award official qualifications), a particularly intense phase in their lifelong education as artists rather than its apogee and end. Add to this the growth of practice-based PhDs, many of which are pursued by mid-career artists of established reputation, and initiatives such as Open School East – a free alternative London art school (co-founded by frieze associate editor Sam Thorne) that launches this September, which has no formal academic entry requirements – then the degree show seems less like a threshold, and more like a revolving door.

Such exhibitions remain, however, a vital moment in many young artists’ development. To support their 2013 degree show, Goldsmiths’ MFA cohort mounted a campaign on Kickstarter, the website that enables crowd-sourcing funding for everything from tech startups to self-published Steampunk comics. While their efforts were successful (£5,677 was pledged, happily exceeding their £3,000 goal), it remains shocking that students already paying hefty tuition fees are forced, in the current higher education funding climate, to throw themselves on the mercy of the digital version of David Cameron’s ‘Big Society’. Clearly, this is not a sustainable or scalable model. Goldsmiths, with its global renown, may be lucky enough to kickstart the next few graduate exhibitions, but is the same true of, say, Hereford College of Arts? Given the resourcefulness of art students, the degree show, or something like it, will endure. Where, and on whose terms, remains open to doubt.