Bianca Saunders Is Building a Brand That Does It All

The Lewisham born and bred ANDAM prize winner on her early influences, designing menswear and how she exists in two worlds at once

In August, designer Bianca Saunders was scrambling to make it on time to the 2021 ANDAM awards ceremony at the Palais Royal in Paris. ‘We couldn’t find the entrance so, by the time we arrived, they had already started the speeches. When I finally got there, they had been looking out for me and said: “Bianca, come to the stage right away!” I can’t speak French, so I had no idea what was being said as I went up. When they gave me the award, I was just so shocked.’

While Saunders hadn’t anticipated the accolade – a prize worth €300,000 and a year of mentoring from Balenciaga president and chief executive officer Cédric Charbit – the fashion industry was already watching the young designer. Since graduating from the Royal College of Art (RCA) in 2017, her collections have impressed, her signature style taking familiar tropes of menswear, tailoring and subverting them to raise questions about traditional masculinity. Denim is twisted through the leg, blazers peak out the shoulder with exaggeration, while her t-shirts and shirts often tell the story of her upbringing through fabrics printed with Jamaican patois, symbols and family photographs. In conversation, Saunders speaks in hushed tones, but is warm and illuminating, particularly when discussing her work. ‘I was really quiet as a child and I am still figuring out my social skills,’ she tells me. ‘My personality is very much a pendulum between outgoing and reserved.’ This dialogue between both sides of her psyche is fundamental to her approach to design. 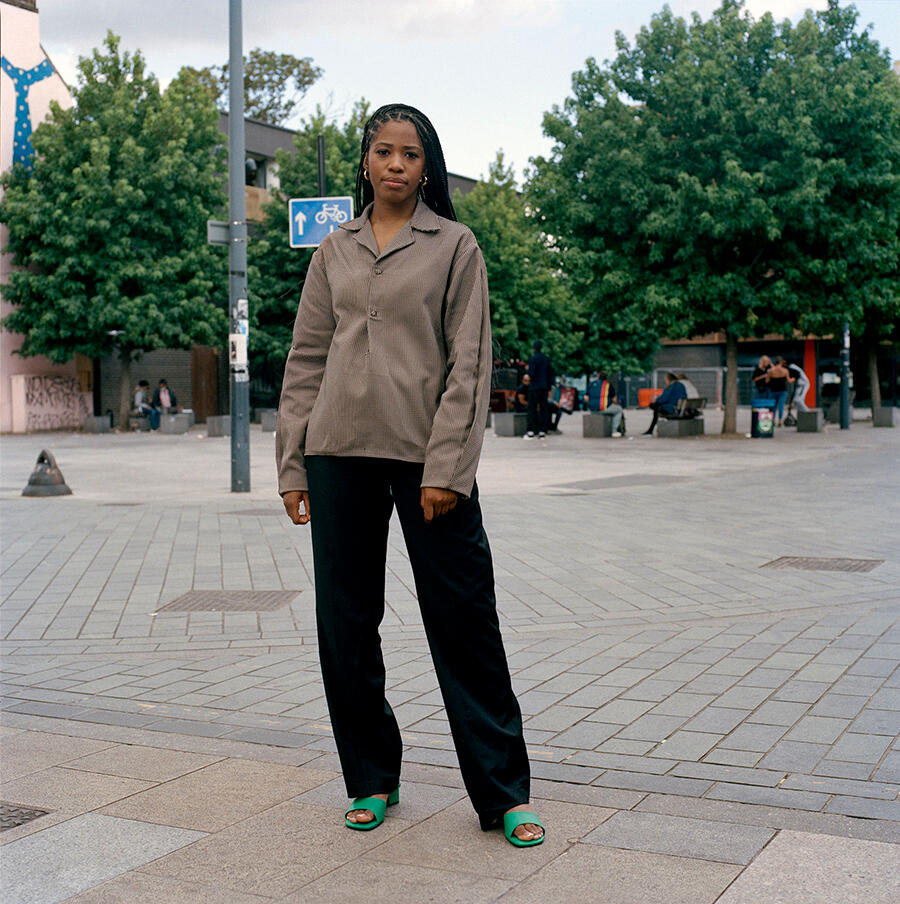 Born in in South East London’s Catford to a large Caribbean family, Saunders has spent her entire life in the area of Lewisham, near her parents, grandparents and extended family. ‘I’ve got a few cousins in Jamaica. I go there for Christmas, for weddings, for funerals. I feel like I have a good balance of knowing where I come from in Britain as well as my heritage. Everything is centred around family.’

The entrepreneurial work ethic of her parents – a hairdresser and a plasterer – encouraged Saunders to do what she wanted as a child. ‘I realize how much of a privilege that is, to have supportive parents that allow you to just create a space for yourself. One time, I said I wanted to be a doctor and my mum asked: “What are you doing?” She knew it wasn’t right for me,’ Saunders laughs.

Initially wanting to be an artist, Saunders sought the advice of a graphic-designer uncle, who encouraged her to think about her natural skills. ‘He lived in my grandma’s house, where he used to have portraits, paintings and drawings, and I just thought the whole process was so interesting. My grandma was handy with a sewing machine: she’d make curtains and things for people. I still have an old machine of hers that I used when I first started the brand. My mum was also super creative. She used to make my outfits if I had a party to go to. I think those early influences encouraged me to try to study fashion, but it was always somewhat of a process of trying to figure it out. I was like: ‘How do I become Alexander McQueen?’” 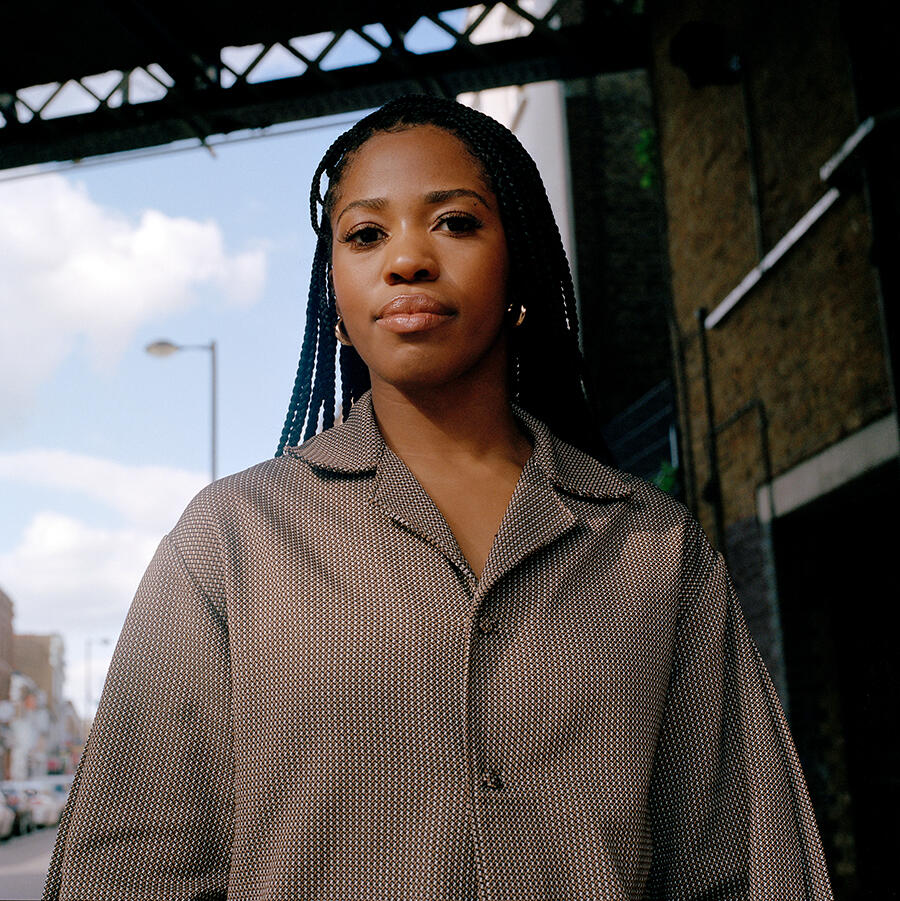 After studying for her BA at Kingston University, Saunders was recommended by her tutor to the RCA’s head of fashion, Zowie Broach. ‘It was so far removed from my world at that time that I didn’t even know much about it,’ she recalls. Saunders’s designs integrated her own story and the stories of men she knew growing up. The lookbook for her graduate collection, ‘Personal Politics’ (2017), comprised intimate portraits by photographer Adama Jalloh of men in Saunders’s simple separates, that played with volume and layering. It was accompanied by a film, Permission (2017), directed by Akinola Davies Jr., which further examined masculinity and gender.

Saunders has maintained a curatorial approach to her collection ‘drops’ ever since. A new season of clothing is often accompanied by a film or an artwork, deepening its connection to a story or a conversation about subverting traditional notions of what men should be wearing, often through members close to her community in London. (Saunders counts the likes of artists Caleb Femi, Jazz Grant and Ronan McKenzie as collaborators.)

‘At the RCA, I saw that there was more than one way of presenting a brand, that I could bring in art and design – all the things I am interested in; right now, I am working on furniture. For me, it’s about creating a world around the clothes and constantly combining ideas. I think that’s what keeps me interested in my brand. I feel like, if I had one way of doing things, I probably would want to stop doing it. I get bored quite easily.’ 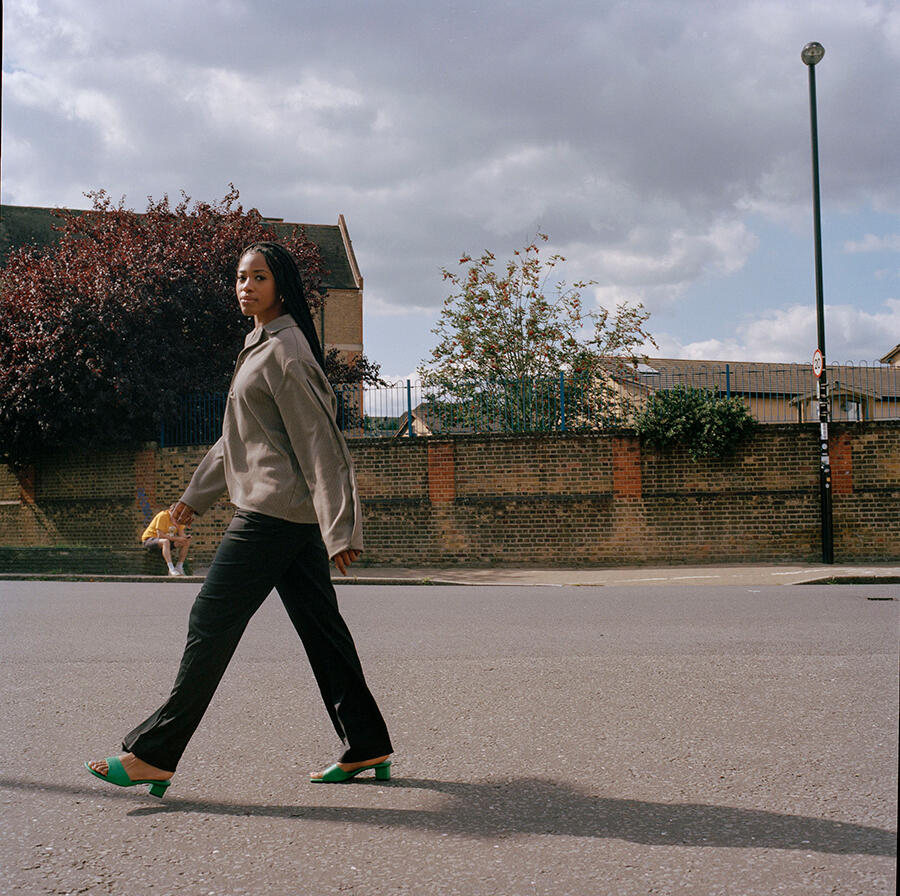 Now, after just four years, Saunders is one of the few women (and even fewer women of colour) designing menswear. ‘I like that I can present a collection that is inherently about being Caribbean but doesn’t have to be in yellow or green. I’m excited thinking about what men could put on their bodies – being sexy or even feminine, in a way. I’m in the minority designing menswear as a woman, but it’s so normal for men to design for women.’

Last year, Saunders moved her studio from her home to a space in the Sarabande Foundation (founded by the aforementioned McQueen), and she now intends to use her ANDAM win to take her label to the next level. ‘My main aim is for the brand to become a household name and not to be known for just one thing', she says. ‘Marc Jacobs can do it all: fragrances, fashion, luxury, commercial. It’s loved by all. That’s what I feel I am laying the foundations to do. I’m excited by my clothing letting my ‘hood’ friends exist in the same world as my flamboyant friends. It’s masculine; it’s feminine; it’s everything in between.’

This article first appeared in Frieze Week, October 2021 under the headline ‘Everything in Between’

Lynette Nylander is a writer, consultant and Executive Editorial Director of Dazed Media. She is based in London, UK and New York City, USA.