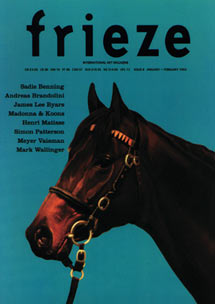 Re-released under the banner 'the director's cut', Blade Runner (1982) is retrospectively described in the updated press pack as having presented a 'new view of tomorrow', and as proving to be 'chillingly accurate' by director Ridley Scott. Both statements testify to the fact that the star of Blade Runner was never Harrison Ford, but the city it depicted. The foundation of the movie's reputation has always been its elaborate cinematic visualisation of a near-future Los Angeles (though it could be any city). Claims of 'prophecy' on behalf of its makers a decade later are inevitable; in the movie business being ahead of your time is the perfect panacea for wider audience neglect - the movie was a box office failure on its original release.

In 1982, recognising the movie's strengths, Warners' original press pack devoted no less than four pages to detailing design concepts, tossing Frank Lloyd Wright and terms such as 'Retro-trash', 'Establishment Gothic' and 'Mayan cast stone motif' into the predominantly ignorant discourse of hack film journalism. The 1992 press pack is smart enough to confirm that the film has attained benchmark status, influencing the look of subsequent movies such as Mad Max - its idelible vision having passed into our image repertoire, prompting us to describe certain other futuristic visions as 'like Blade Runner'.

A significant factor in the movie's reputation outside of the movie-sci-fi consumer is that 'Ridleyville' - as Bladerunner's city became known on set - is clearly an anti-modernist vision. For years it has therefore provided a main referent for theorists, critics and cultural commentators on the city, architecture and the postmodern condition. Blade Runner is city collage/montage; a postindustrial, diffused metropolis which brilliantly fuses futurism with the archaic. Old buildings have been 'retro-fitted' for new use; new buildings echo ancient pyramids or antique Oriental, rather than the clean modernist factory aesthetic. You can sense the global warming. New York, Hong Kong, Tokyo, Milan and Piccadilly Circus co-habit the screen to startling, and prophetic, effect. Electricity crackles in the constant downpour of rain. The result feels like Bangkok in Downtown LA by way of Paul Virilio. As if thinking primarily of George Lucas' pompous directorial debut THX 1138, Scott said at the time: 'Most films depict the future as pristine, autere and colourless. We were determined to avoid shiny buildings, underpopulated streets, and silver suits with diagonal zippers.'

A movie so design driven becomes mere facsimile on video. 'Director's cut' or not, Blade Runner's reappearance is therefore welcome. New and familiar audiences are now able to reassess the movie's importance for themselves on the big screen - its rightful Panavision place.

The narrative was always minimal. Rick Deckard (Harrison Ford) is an ex-Blade Runner - a detective specially trained to 'retire' renegade 'replicants'. A replicant is a life-like android used as slave labour on other worlds where millions of people have fled due to the over population and decay of Earth. Four of the Tyrell Corporation's most sophisticated Nexus 6 replicants have killed a space shuttle crew and returned to Earth. Deckard is coerced into finding and retiring them, a task complicated by his falling in love with Tyrell's own beautiful replicant assistant Rachael (Sean Young), and by replicant leader Batty (Rutger Hauer) - determined to meet his maker in an attempt to extend their pre-programmed 4-year lifespan.

This director's cut rectifies three main industry-driven decisions made in 1982. Gone is the wholly inappropriate and unnecessary voice-over narration from Deckard - originally added to help 'explain' events to an audience. It not only failed to do so, but achieved gratuitousness by the very minimal nature of its function. Secondly, the relationship between Deckard and his replicant love Rachael is here expanded by the inclusion of several scenes dropped from the original version. Thirdly, the 'up' ending of their escape to pastures green and new - incorporating a voice-over assuring us that Rachael was not programmed to die in four years - has been removed altogether, having been tacked on initially against Scott's better judgement.

The resulting cut is at once more satisfying and more infuriating. This Blade Runner ironically succeeds in emphasizing a consistent frustration in Scott's best work (with the possible exception of Thelma and Louise). Within each relentlessly surfaced Ridley Scott movie lies a more conceptually interesting film attempting in vain to break through a glistening carapace. The real star of Alien was the interior of the crew ship 'Nostromo'; the eye catcher in Someone To Watch Over Me was the victim's appartment. The star of Blade Runner is still the city, a more unsatisfactory state of affairs now that it is possible to witness the full arrested development of Deckard's complex relationship with female android; increasingly annoying now that a purer, more logical and darker vision finally closes the film.