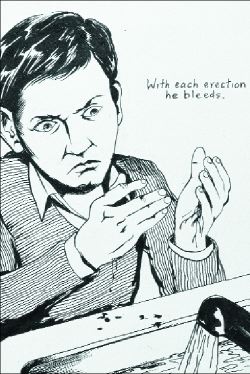 Let me talk about literature - not the trunk but the twigs and leaves, the many tiny flourishes of the written language. Belles-lettres live there, too, even in the drawings of Raymond Pettibon, of which, I would estimate from what I know of the man and his work habits, there are perhaps 15,000, give or take a few thousand.

It is a singular and stubborn genre he's invented: subtly insistent, scrap upon scrap, an art of quotation, invention, iteration, gloss, some doodling, perhaps, in the margins of books (or illumination, if you prefer), some editing, a lot of humour, some crocodile tears and probably some real ones. 'My barbaric yawp', Walt Whitman called it, when it was his. Pettibon's is almost the opposite: more decorous, more selective, almost finicky, prickly, contrary; it's an example of that sub-strain of American feeling which prefers democracy only because it gives you more to choose from, a better show to watch, and because you never know what brilliant little cultural pirouette may appear. But it is a yawp, none the less: a babbling, muttering, explaining, begging, re-explaining, exhorting, asserting, apologizing, blurting out, and explaining yet again. What is the object of all of this multiplying effort, this crucial folly? Do you promise not to laugh, and not to take me too seriously? Call it the autobiography of a penis - not Pettibon's own, of course, but the penis that bobs through history, shows itself in art and society, the one you catch briefly, waving from the grandstand when the camera pans over the fans.

A complex critter, this famous member: needless to say, assertive, but also sometimes shy, elusive, mysterious, both annunciatory and somewhat oracular, whether in true Delphic fashion or merely as Wizard of Oz, we will never really know - and the difference may be moot. So, to be literal, there is a catalogue of Pettibon's work, bearing the imprimatur of the Renaissance Society at the University of Chicago, which consists almost entirely of a succession of identical or similar images of an erect penis, lying at an angle across the page. There are about 150 of them, I'd guess, and each comes with its own tag ('Soft on Communism', 'Satan will be pleased', 'Forget the meaning. Just enjoy', 'He did not have the heart to say no'). Thus, the phallic fellow has various things to suggest, and various ways of suggesting them: he is a fully formed character, as the critics like to say.

And why not? Reading an interview with the artist, I came across his assertion that Henry James (a hero of Pettibon's, and the source of some of his quotes) was among the most phallic writers who ever lived - a proposition so unlikely that I was brought up short, puzzled and pondering the idea. Alas, the interviewer seems to have had no such reservations, and the conversation blithely moved on, leaving me to wonder whether Pettibon was simply having a joke - it wouldn't be unlike him - or whether he meant it. James, of course, was a master of indirection and grammatical pleasure deferred, a devotee of discretion, and intensely sympathetic to his female characters; and for what it's worth, he seems to have been, strictly speaking, celibate all his life. (It's worth noting, too, that John Ruskin, another of Pettibon's favourite sources, also seems to have died a virgin - though unlike James his tastes ran to the distaff.)

Whatever 'phallic' means, these are hardly the qualities ordinarily associated with it. And yet Pettibon is quite right, isn't he? If you look at it from a certain angle, there is something ... unquiet, shall we say, at the bottom of James' prose, something asking, asserting, looking for a reason to reach tumescence. And so I say that these Pettibon drawings, too, are hymns to what James (had he thought of it) would no doubt have called The Hard Thing: that general presence, or possibility thereof, of which the penis is ultimately only an emblem.

Pettibon is creating, out of this vulgar inspiration, a kind of metaphysics: a mirror and a manifestation of the life of our symbols, the rhetoric of art and its media, and the vaporousness of the English language, even unto its most heroic and villainous history.

So alongside Phallus as a character we have his various incarnations: Elvis, Jesus, Manson, the ejaculating Vavoom, the oddly priapic and yet appropriately flexible Gumby. As iconic as these figures are, the very emblems of ithyphallic force and meaning, are they not, somehow, forlorn and forgotten? They get belligerent and they brag, yes, they snarl and spit, and they surely mean it; but then they plead softly for a little recognition, ask humbly to be remembered, murmur little philosophies and second guesses. Pettibon's Californian surfer is a brave and intrepid man, but the vast, turgid ocean upon which he rides is an immutable force, the medium from which he derives his purpose, and he can't help but wonder why he does it. 'Catch the drift', he says. 'To what end?' Flipping through Raymond Pettibon: A Reader (1998), a selection of the artist's favourite writing (James is in there, along with his sister Alice, and Ruskin, Manson, Thomas Carlyle, Osip Mandelstam, Ring Lardner ...), I find these two drawings: Elvis crucified like the Christ himself, under the words 'You didn't love him enough!'; and a steaming locomotive - beloved cliché of the male member, with or without its accompanying tunnel - above the words 'When I see a train, I want to take it in my arms'.

Oh! such tenderness, bestowed upon that which seems to need no tenderness. Dear prick, beloved pet: what secret yearnings you have! How seldom are they actually spoken. The life of our world and the history of our culture are filled with phallic talk, and occasionally even with talking phalluses, but who before Pettibon noticed how little of it conforms to received ideas, how rich and multiform the monologue actually is? He has roamed the secret history of these things, selected very carefully, unearthed a treasury, added more than a few of his own gems (perhaps half of the text on the drawings is quotation; the other half is his own), and then illustrated the whole; not with spectacular skill, to be sure, but then spectacle would hardly be called for. The drawings and the words enter into a kind of compact: that neither will try to dominate the other. Better draughtsmanship would not result in better art, for the very idea of betterment is irrelevant: there's only repetition, perishing and renewal, a never-ending succession, like so many erections, really. The point is not to make the final one, or the ultimate one, but only to make another. No hard-on is a masterpiece, though any one can feel like something to be proud of.

I say it again: this is a penis talking, speaking out of its own experience, channelling its history, testifying, pouring that history forth, with all its contradictions intact. Then is Pettibon's achievement merely another document of the erotic? A dirty joke? An owner's manual? Not at all. It's deeper than that, and considerably more daring. You see, on my very own wall there hangs a Pettibon drawing which the artist himself gave me, about a decade ago, when I was visiting him one sunny afternoon at his house in Hermosa Beach, California. There were stacks of drawings everywhere, piled high in a tenebrous ante-room; we were going through them, more or less idly, and when I admired one he insisted that I take it.

I should probably have forsaken it, if only out of probity; but it seemed rude to say no, and besides, I wanted it. So I carried it home to New York and framed it, and I've lived with it ever since: a small ink sketch of a long-haired man lying supine amid droplets of blood, with a perfectly apposite sentence inked in around him: 'Sex had nothing to do with it', it says. 'This one's for the revolution.'