Dramatizing the Effects of the Virtual Life 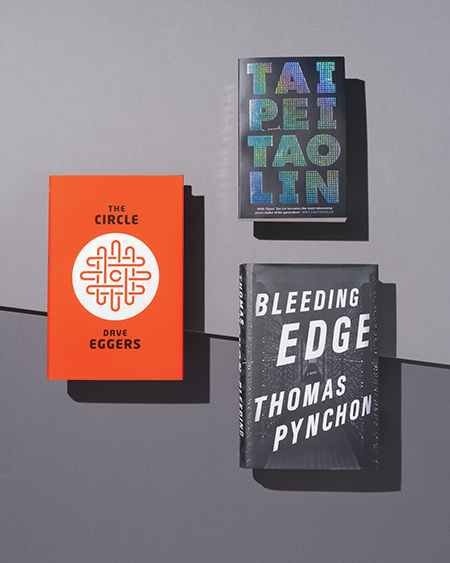 What is our virtual life? Not a new question, but a newly literal one, as the technologies of late-capitalism propel culture toward terminal inanity and political economy toward plutocratic rapacity, without any ideological hope in sight. It’s a problem of privileged, bourgeois consciousness, and thus the rightful province of the novel.

In The Circle (2013), Dave Eggers follows the rise of Mae Holland through the ranks of a futuristic internet company that ate all the others – Google, Facebook, Twitter – and incorporated their genes for Silicon Valley solutionism into an insatiable metastasis. The ambitions of the company, The Circle, include exploring the ocean depths, videoing every happenstance for posterity, implanting gps chips in children’s bones, turning genealogical research into a monstrous inheritance of original sin, and converting human desires into analyzable metrics.

In The Circle, it’s not only the desire to solve problems permanently that causes trouble, but the inability to stop addressing them in the first place. Eggers revises George Orwell’s doublespeak from 1984 (1949) for the digital age: ‘Secrets are Lies’, ‘Sharing is Caring’ and ‘Privacy is Theft’ are the company’s principles. The subtext is that liberal society’s civilizing impulses, rather than power’s seductive force or capitalism’s invisible hand, might be leading us down the primrose path. This is true terror, an evolutionary trajectory in which the human is obviated on the way to some next stage, and a progressive view of history is replaced by a random one.

But soon The Circle devolves into a straight update of 1984, letting down its premise and casting a sepia-toned obsolescence over the entire dystopian genre. The company’s CEOs become a villainous Trinity for the Obama Era: utopianism, megalomania and naïve technocracy. Politicians and the citizenry alike giddily welcome their mandatory log-in to a full range of totalitarian control. By borrowing Orwell’s form wholesale, Eggers makes Mark Zuckerberg’s New World Order into Stalin’s. The ‘undeniable present, the unavoidable future’ is presented with a big scoop of dramatic irony. We know what it would take to avoid it – mass opt-out, inspired by a brave act from Holland. Whether enough decency still smolders in her heart to spark this revolution matters little; it’s a Hollywood set-up, wherein complex societal impulses are converted to a single heroic choice, suggesting the very literalism the book purports to decry.

Thomas Pynchon’s latest techno-thriller, Bleeding Edge (2013), does something subtler. Its heroine, fraud investigator Maxine Tarnow, is pursuing a wisecracking investigation of loose-ended conspiracies, also centred on a monomaniacal software company with a sinister ceo, when 9/11 happens. In the grip of a ‘mediatized’ mythos of collective grief and individual impotence, Tarnow longs to escape the real world and its real victims, to find a way ‘to step outside her own history of safe choices and dowse her way across the desert of this precarious hour, hoping to find what? Some refuge, some American DeepArcher …’

DeepArcher (a pun on ‘departure’) is a virtual world created by idealistic rogue programmers, a poignant projection of human wishes, as opposed to the corrupted and compromised ‘meatspace’ of embodied life. In meatspace, Tarnow is condemned to be the jaded gumshoe; in DeepArcher, she explores with aimless, retrograde innocence, a liberating lack of both irony and purpose. Her cyberspace avatar allows a return to the Garden, if only for a minute, until the serpents find a back door and she finds herself expelled again.

Virtuality in Bleeding Edge is an aesthetic space without function, a hologram of the American frontier – not evil or arbitrary, merely a new theatre for civilization’s ravages. And yet, as the novel closes, and Tarnow’s escapism threatens to ‘overflow out into the perilous gulf between screen and face’, she turns away from the Brave New World and back toward the pleasures of parenthood, her complicated ex-marriage, her teeming nyc, of which she keeps trying but failing to make sense.

Unlike Holland’s, Tarnow’s choice can’t save humanity, only herself, and though Pynchon’s characters are never rounded consciousnesses, they are nevertheless people caught in a recognizable, if exaggerated, facsimile of history, rather than pawns in a morality play. Pynchon realizes that if we are truly technology’s victims, the best we can hope for is to cultivate the flora we grow in its seams. This is why Bleeding Edge offers real medicine for digital alienation. Its pleasures lie not in neat plotting or satire, but instead in the virtuosic piling-up of local accents and hilarious tropes, brand names and historical revisions, linguistic memes and pop songs.

But neither Eggers nor Pynchon has quite reached the desolate land’s end of fictional cyber-consciousness. Tao Lin, who came of age with the internet, just might have. Without the old-school novelist’s recourse to comforting fables of individual heroism or low-life pageantry, Lin faces down digital overstimulation and incurable jadedness by voting no-confidence in the notion of the author – or even the self. His fiction is immersed in virtual dislocation but allergic to its own sentimental responses.

Lin’s work has been called ‘autistic realism’, but ‘autoimmune realism’ might be a better diagnosis for his ‘breakthrough’ novel, Taipei (2013). Taipei is a not-so-veiled autobiography, following a writer and internet hypester named Paul through a haze of web-surfing, texting, party-going, public reading and drug-taking. Lin/Paul busily tries to erase himself, not just with substances and misanthropy, but via a basic disbelief in character and sentences unbefitting an author.

The narrative style of Taipei is aggressively annoying. It uses quotation marks with insane liberality, not just for suspect states like ‘so cool’ but for ordinary phrases like ‘walking on the sidewalk’. It leaves out the meat of life in favour of the plate; Paul’s writing, tweeting and blogging are described as ‘doing things on a Macbook’, hash marks on a scoreboard rather than thoughts in a discourse. Every act – from a subway trip to oral sex – is deadeningly deadpan, empirical.

Lin’s project lives in Pynchon’s ‘gulf between screen and face’. You can find him on YouTube conducting the drug-addled readings Paul conducts in the novel. He extols drug use, but it never seems to help his permanent torpor. (Never have so many drugs seemed to affect characters’ mental states so little as in Taipei.) Lin taunts fans. He gives what must be the worst author events in the history of the form. Not since the Beats, or maybe Norman Mailer, has an author so successfully deployed persona in marketing. It makes him a polarizing anti-hero with more insecurity than brio, less Merry Prankster than Depressive Mumbler.

The difference with Lin is not his internet-age suppression of obvious intelligence, seriousness, warmth, eloquence. It’s that he seems to have arrived there not via the model of the writer, but that of the rock star or performance artist. His public performances echo Bob Dylan in Don’t Look Back (1967), or an interview with the late Lou Reed. He ridicules the gullibility of his audience, and they lap up the anti-charm, unable to resist for fear of not being in on the joke. He’s a little anti-intellectual, and a lot anti-literary.

Taipei is addictive, despite all this. There are moments of surprising emotional clarity. A plot finally takes shape – of all things, a star-crossed love story, with fellow wastrel Erin. Her ‘quiet, soporific crying’ is unexpectedly moving, since Paul hears it ‘like something from nature’. Paul’s masturbatory musings can verge on fallen poetry: ‘At some point, Paul vaguely realized, technology had begun for him to mostly only indicate the inevitability and vicinity of nothingness. Instead of postponing death by releasing nanobots into the bloodstream to fix things faster than they deteriorated, implanting little computers into people’s brains, or other methods Paul had probably read about on Wikipedia, until it became the distant, shrinking, nearly nonexistent somethingness that was currently life [...] technology seemed more likely to permanently eliminate life by uncontrollably fulfilling its only function: to indiscriminately convert matter, animate or inanimate, into computerized matter, for the sole purpose, it seemed, of increased functioning, until the universe was one computer.’

It’s nearly unreadable, but that merely underlines its point. Those sad little qualifiers – ‘vaguely’, ‘probably’, ‘seemed’ – do the work of pages of ‘somethingness’ in others’ writing.

Taipei fails to animate a mind but still enacts a mind’s struggle. Neither emotional numbness nor copious Klonopin can stamp out the humanity in Lin’s clowning. His stylization is no less extreme than that of Pynchon or Eggers. But his book dramatizes the effects of a fully virtual life better than theirs, because it makes its author a guinea pig and a victim. This is a pathological retreat for the form, one that art and pop music tried some time back. It may not end well. But it sometimes, probably, vaguely seems like the only way for the novel to go.

Ian Chang is a writer living in Los Angeles, USA.