Born on the Kitchen Table

A Power Stronger Than Itself: The AACM and American Experimental Music, George E. Lewis (University of Chicago Press, 2008) 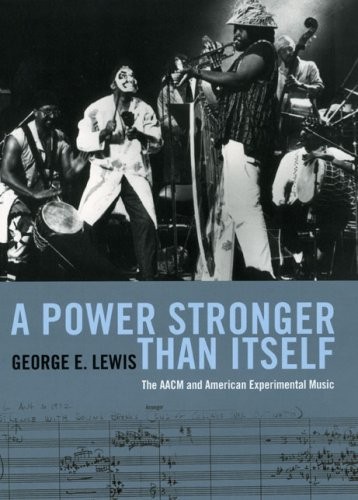 As creation myths go, the AACM’s seems fairly prosaic. Among jazz origin stories, more magical is the legendary Christmas Eve of 1939, when Charlie Parker is said to have improvised a bar of ‘Cherokee’, constituting what were very likely the first notes of bebop. The AACM (Association for the Advancement of Creative Music), on the other hand, was hatched at a kitchen table in a housing project on the South Side of Chicago. Written by George E. Lewis, a trombonist by training and a longtime AACM member himself, A Power Stronger Than Itself: The AACM and American Experimental Music proves that humble origins can yield great promise.

By the late 1940s, bebop had already become somewhat codified, accepted without question by jazz circles and mainstream critics alike. It was, however, openly challenged by the emergence of ‘free’ jazz – as played by Ornette Coleman and Eric Dolphy, who themselves had come out of bebop (the former’s 1960 Free Jazz album was released on a major label, Atlantic, and featured, incidentally, Jackson Pollock’s White Light, 1954, on the cover) – and by those, like Pharoah Sanders, who had already embraced globalized forms from Africa and the Caribbean. In the shadow of the growing acceptance of innovative jazz forms, as radio shows gradually shifted to rock and roll and as Chicago jazz clubs fell victim to local governmental discriminatory policies, a loose tangle of mostly Chicago-based musicians were creating ‘original’ music.

Early on, ‘creative music’ was interpreted through the matrix of jazz, and was primarily composed and played by African-Americans influenced by bebop. However, the AACM founders almost seem to have gone out of their way to avoid including the word in their collective title and mission. Lewis believes that the avoidance of ‘jazz’ was not only a way to do away with the constraints that the word and the genre presented, but was also a means by which members sought to broaden the scope of their livelihoods and creative outlets. Equally important to this notion of creative music was that the founders and early members were seeking to establish not so much a musical group or musicians’ union, but a robust and purposeful cultural organization.

It was a recording by Roscoe Mitchell that paved the way for the AACM’s entrance into the more mainstream jazz scene: released by Chicago’s Delmark label in 1966, Sound was radical in its realization of the equal roles sound and silence play in composition. (While this may sound hopelessly Cageian, it was Miles Davis who once said that he composed his best pieces by examining what to leave out, not what to include.) Acceptance, or some form of it, in popular jazz circles allowed the AACM to concentrate on other aims: setting up a music school for inner city children (which offers free tuition to this day); political involvement with the infamous segregated public housing from which many Chicagoan members were launched; as well as working diligently to find performance opportunities and venues for its members.

A Power Stronger Than Itself also serves as a distilled account of the Great Migration: countless members of the AACM were the sons and daughters of families that had migrated north to industrial cities (Chicago, Detroit, Gary, Indiana, and St. Louis) looking for work in the early decades of the twentieth century. Even though their experiences are a unique result of that phenomenon – poverty and single parenthood (saxophonist Fred Anderson); crumbling schools (Lewis himself) and public housing; military service (trumpeter Philip Cohran) – autodidactism and private inquiry marks many members’ affinity for the forms of improv that found a home within the AACM.

Until now, creative music and the South Side-based collective built around it has been regrettably underrecognized and long misrepresented. Following a decade of attentive research and interviewing, Lewis has not simply set out to reconstruct a meticulous history of the organization – indeed, he calls the book a mere ‘interim’ history – but to debunk popular misconceptions about the role of the organization in jazz and political milieus. Lewis takes readers beyond the more recognizable careers the organization launched – those of Henry Threadgill, Anthony Braxton and the Art Ensemble of Chicago, for example – as well as detailing preceding collectives (such as the Experimental Band and the St. Louis-based Black Artists Group) and the politics of various musicians’ unions. Lewis doesn’t shrink from confronting the controversy of the not-so-amicable splintering of the Chicago and New York outposts of the organization (mended somewhat in recent years after the 40th anniversary of the group was celebrated), nor does he attempt to give the group a misrepresentative polish.

With extended discussions on composition that may be lost on a lay reader, A Power Stronger Than Itself may be scholarly but it is not out of touch: the crystalline study is thoroughly engaging, missing perhaps only a detailed family-tree-style chart at the beginning to lay out the cast of characters that Lewis so thoroughly unpacks. Even the most dedicated improvised music aficionado will find anecdotes, relationships and hitherto unknown performances and biographies laid out in stunning detail, culled from interviews and the audio tapes of early AACM meetings. The book is a graceful intertwining of oral history, hard research and insightful scrutiny of a complicated organism.