Norwegian artist Bjarne Melgaard is driven by a destructive desire. His embodiment of the nihilistic, ‘bad dad’ persona1 is reminiscent of a kind of death-drive. From violent meta-pornography to USD$500,000 designer fashion giveaways, Melgaard has made attention-grabbing and often highly controversial art works his trademark, placing him in at the centre of an art world attention-economy, in which the artist-brand requires continuously more extreme forms of maintenance – much like contemporary fashion labels.

This is exactly what seems to have led Melgaard to his current, ongoing study of ‘fashion’– a term he defines in the press release for his latest exhibition, ‘The Casual Pleasure of Disappointment’ at Red Bull Arts New York and Gavin Brown’s enterprise, as ‘a vague nothing at the intersection of a subject and an object – between inadequacy, self-deceit, victimization, ethical compromise, intellectual humiliation, financial/romantic entanglements and corporal decay’. But what transpires in the show – which aside from presentations at both venues, includes the launch of multiple fashion lines, editorials, a collaboration with Norwegian jeweller BJØRG and a giveaway of Melgaard’s accumulation of designer robes – seem less about fashion than branding itself.

Branding, the coded language of consumer capitalism, privileges name over product, signifier over material, produces a form of attachment rarely found outside of human relationships. In the show’s press release, Melgaard claims to trade his status as an ‘artist’ for complete identification with a personal ‘brand’, and in doing so he succumbs to the dynamics of branding that not only fetishizes identity but instrumentalizes it for commercial interests. For such an endeavour, the context of the newly re-christened Red Bull Arts New York (formerly Red Bull Studios) seems more than ideal: located on the ground floor of Red Bull’s downtown New York headquarters, it represents the newest form of cultural institutionalism where multinational corporations assume the role of a museum or Kunsthalle (not unlike Fondation Louis Vuitton in Paris), a move that among other things advances the prominence of their brand. In this context, the artist’s brand is co-opted by another brand, producing a double bind ripe for institutional critique. 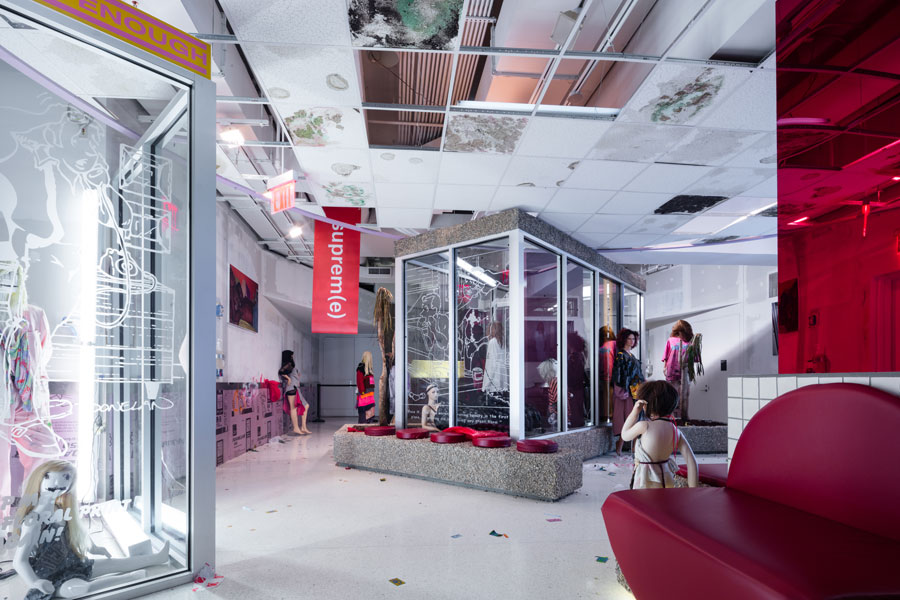 In Melgaard’s total-installation, the horrors of branding manifests as a kind of post-apocalyptic retail environment (returning, in a way, to the building’s original form as a Barneys Co-op): a grim, dimly-lit ruin of a luxury department store filled with broken advertising lightboxes, dead mall plants and massacred mannequins dressed in bespoke trash-fashion courtesy of the artist’s meta-brand MELGAARD. (At Gavin Brown’s Enterprise, the launch of Melgaard’s jewellery line was marked earlier in the week by a pop-up event in which live piglets modelled his necklaces around their bellies while scampering in a pink pen.) The slick visual language of fashion display (vitrines, podiums, full-length mirrors) are inverted as uncanny signifiers of destructive consumption – the endgame of commerce, and of culture.

One corner is devoted to Melgaard’s actual fashion lines, all variations of contemporary deconstructed street wear à la VFILES: hoodies, oversized t-shirts, flight jackets, and sweatshirts in shades of pale lavender and black, covered with patchwork logos emptied of meaning. What these pieces lack in design they make up for in branding, arbitrarily cross-pollinating brands from the lower worlds of street fashion to the higher-brow (but equally despicable) art world. Here, art theory publisher Semiotext(e) merges with (no longer so) underground label Supreme to form Suprem(e) (all works 2017); other silk bomber jackets bear the names of Kathy Acker and Tiqqun editions, or the title of Chris Kraus’s art world novella I Love Dick (1997). Intellectualism, in other words, is nothing but the label du jour that we stitch onto our ironically up-cycled designer clothes. 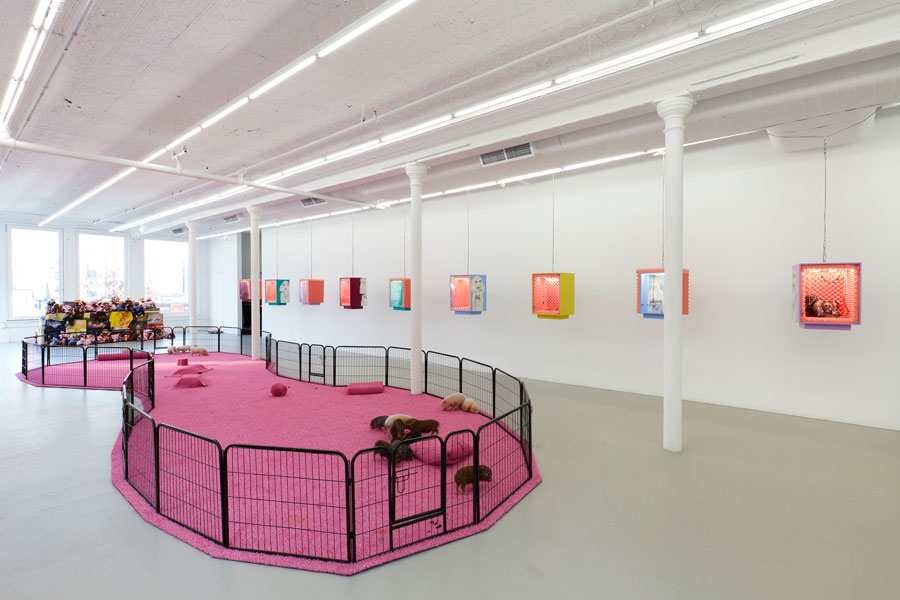 Merchandising has had a long and complicated influence on art history. Marcel Duchamp’s La Boîte-en-Valise (1935) may have been the first instance an artist adopted the dynamics of mainstream commerce to produce and sell their art. The multiple follows the logic of merchandise, bypassing questions of authenticity and value by flooding the market with reproducible commodities. Piero Manzoni’s Merda d'artista (1961) literally offers a by-product of the artist’s own body as a branded commodity; Joseph Beuys’s Intuition Box, an edition of around 12,000, tried to disseminate a single conceptualist idea into an endless network of audiences via the format of merchandise; Renée Green sold T-shirts reminiscent of band merch commemorating her 1993 staged travelling World Tour. The collective Bernadette Corporation in particular, who are rightfully cited by Melgaard in his garments, made merchandising central to their practice, and their use of corporate brand strategies lives on today in Reena Spaulings, their elusive literary offspring who exists as both an artist and a gallery. More recently, the collective Shanzhai Biennial has jokingly but poignantly critiqued the art market’s event economy: for their 2012 Frieze Project, for instance, they produced a high-end quilted calfskin and gold chain edition of the traditional, ubiquitous Frieze tote bag. At a price point of  £5,000, it was an arguably a more natural fashion choice for the fair’s high-end art-buying clientele – and satirized the democratic promise of the ‘accessible’ gift shop merchandise that would usually come in one.

It’s probably no coincidence that the press release for Melgaard’s ‘The Casual Pleasure of Disappointment’ credits two-thirds of Shanzhai Biennial (Babak Radboy and Avena Gallagher) as collaborators in its ‘creative direction and styling’; but while the collective fully adopt the performativity of retail environments, Melgaard’s haunted shopping mall seems slightly less convincing. This is largely due to his dismissal of fashion as a ‘vague nothing’, and his belief that retail stores are somehow ‘worse spaces’ than art galleries. In Melgaard’s view, merchandise is no more than vulgar commercialism, community-as-commodity. Yet he insists that his branded products carry meaning: keychains, caps, jumpers and jewellery all demand attention from the viewer in their delivery of some diffuse cultural critique. Narrative fragments on clothing patches suggest a form of diaristic confession, or political activism, that just won’t gel, leaving the viewer confused about art’s relationship to fashion and branding. Such half-hearted mimicry-as-critique falls flat as it tries to poke fun at what it nonetheless finds loaded with significance.

As David Joselit reminds us, branding isn’t easy: ‘To grasp its complexities requires much more than appropriating the rhetorical surfaces of advertising and commercial design. Branding is not a style, but an operation.’  This is not to say that artists should refrain from engaging with it; rather, they must take it seriously as an inescapable phenomenon of identitarian capitalism – when we understand ourselves as brands, and brands as legal entities. Is it enough for Melgaard to launch jewellery and T-shirt lines, to stage give-aways and other performative spectacles? Or is our brand-saturated condition in fact much scarier than his haunted shopping mall?

1  A phrase used by critic Caroline Busta in her essay ‘In The Name of The Father’, quoted in the Red Bull Arts New York press release
2  David Joselit, ‘Four Theses on Branding’, Texte Zur Kunst, Issue 103, 2016

Jeppe Ugelvig is a curator and critic based in New York. His first book, Fashion Work, was published by Damiani in May 2020.