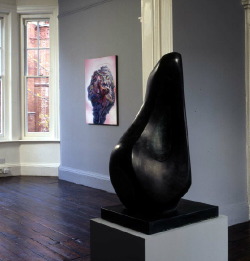 What could break God's heart? Pathos on a cosmic scale might, but cosmic pathos must be an oxymoron. So maybe a dull, sublunary version - a story of breathtaking quaintness or evil - would work. But really the whole universe would have to be swallowed up to do the job, and, despite the menace of George W. Bush, global warming and moon-sized asteroids, the end feels scarcely nigh. Apocalypse? Nah, that's just for the movies these days.

But surely that's not what Glenn Brown means at all by calling his show 'Breaking God's Heart'? The title is the same as Hefner's first album and thus, on a Pop culture level at least, conjures up ideas of authenticity, selling out, heartbreaking love songs and perhaps the temptation of a world-weary slump into coolness, where the bluesy bathos of Indie pop still has currency. So it is appropriate that, as you walk into the gallery, the first thing you see is Haim Steinbach's Boot Hill (1991), an ensemble both quaint and evil. As usual, Steinbach presents the viewer with found objects displayed on an immaculate shelf. In the foreground, behind a row of black mugs decorated with white musical notes, is an electric guitar with its body shaped into a design featuring a skull with black eyes beside a spooky cemetery landscape, capped with a faux wooden sign that reads 'Boot Hill'. Tellingly, the airbrushed signature (Kline © 1990) is the most inexplicable thing about it and may be the reason for its inclusion here. The axe evokes images of a wagging tongue tasting a few locks of long, greasy hair in a background of flashing lights, smoke and power chords. And we all know that's not cool, or very authentic.

Nearby, and well above eye level, Saint Clair Cemin's Memory (2002) looks like the abstracted form of a mutant gecko with a long, tapering cock (or tail), reminiscent of one of Picasso's sculptures, such as the baboon and baby, collaged from found objects. On the next wall, the droopy blue eyes of Jiri Georg Dokoupil's Jesus (1987) fill, in our visual memory, the black holes of Steinbach's skull's eye sockets, but as a clash of good and evil it's a campy affair. In the centre of the room Barbara Hepworth's Coré (1955-6) is the only piece to have survived the fuggy air of irony. Yet, in the context of its cartoonish neighbours, its bottom-heavy form and single round shape like an eye at its apex - a hole that echoes the Steinbach and Dokoupil eyes - resemble a child-friendly Cyclops you might see in an episode of Barbapapa.

Matthew Weir completes the room with his small black canvases, looking like sinister icons. The subjects are small porcelain pieces that the artist collects, and, in this show at least, the objects are hoary clichés of Africans in bug-eyed innocence and full of would-be savagery. Dish (2003), a painting of an actual soap dish in the artist's collection, shows a fleshy vessel, from which rises a leg that a man gives a panicky bite. While the bared teeth recall the skull's teeth in Boot Hill, the image also brings to mind Francisco Goya's Saturn tearing a chunk of flesh off one of his children. The other two paintings of the same sculpture - a black man with a little white girl - draw attention to his use of paint, which is thin yet unctuous and glossy, not unlike the surface of a Glenn Brown painting. These are the most powerful objects in the show, calling attention to their own surface, and to a host of charged queries into the ownership of images.

Sherrie Levine's Cathedral (1995) - nine black and white photographs of Claude Monet's series 'Rouen Cathedral' (1891-5) - is a fairly routine look at how art is preserved and presented. The creamy mattes and fine wooden frames are more convincing as subject matter than the hazy cathedrals within them. Framed beautifully and hung above a fireplace in a grid, they might have been the prized set of a collector. Although the dullest work here, the pictures provide useful connections to both Matthew Weir and Brown. Dirty (2003), the curator's contribution, hung across from Cathedral, looking like a melting blob of candyfloss trying to resolve itself into a portrait, and topped by a delicate halo.

That halo is, of course, an affectation, a pointless nod to religion or art history, and contributes to the show's anti-romantic reflection on authenticity. Even if God's heart were breakable, this exhibition would probably fail to stir the metaphysical muscle. However a deeper set of connections, too subtle to recognize, must be at work here because the show is a success, and feels more powerful than it superficially looks. The surface is a scintillating pleasure to look at, and the witty visual synthesis, for which Brown deserves credit, makes it worth spending time in the gallery. The curating suggests that immanence trumps transcendence; instead of looking up, we ought to look around. Perhaps I gleaned that from the show because I already agree with it, but it still bears repeating, just as this small, successful farewell for 38 Langham Street could reward a very long stay.