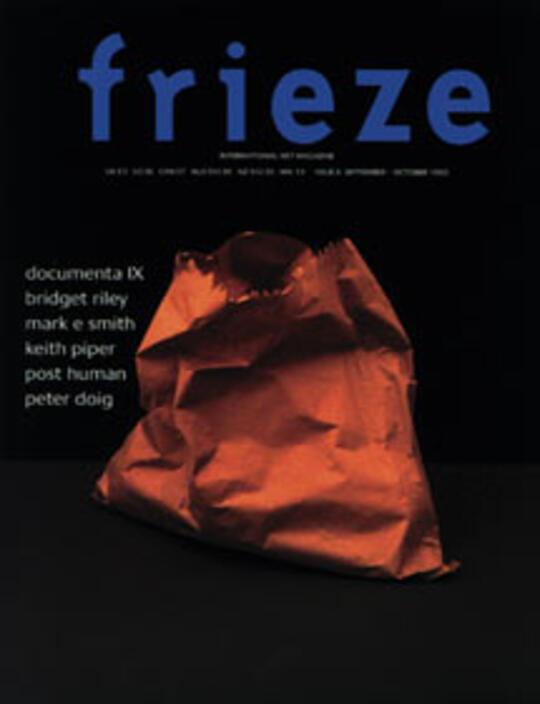 Brian Eno is so good at talking about himself that he has always courted the risk that his explanations will prove to be more interesting than his work.

Brian Eno is so good at talking about himself that he has always courted the risk that his explanations will prove to be more interesting than his work. Like Peter Greenaway, another English landscape enthusiast, systems specialist and polymath, Eno can't resist demystifying his own procedures and supplying his own footnotes. The only thing he leaves for his critics to do is disagree. It was entirely characteristic that he should mark his first real return to London since his video installation at the Riverside Studios in 1986 with an 'illustrated lecture'.

Even so, it was a slightly curious event: a talkfest with the trappings of a rock concert - props, music, lighting effects, scene changes, extras and a packed audience of fans old enough to have seen his 1972 debut with Roxy Music on Top of the Pops. A pioneer of what came to be called 'cross-over', Eno jumped tracks from fine art to glitter pop, migrated to rock's boundary with objects such as his Obscure record label, then in the 80s, broke through the border into video art. Today he wanders the High-Low axis pretty much at will: he can produce chart-busting albums for U2 or rub shoulders with Dara Birnbaum and Bill Viola at the Stedelijk. Sitting at a desk with a fake newsreader's microphone, Eno described an early attempt to compose a map for explaining the relationship between smells.

At length he abandoned what was clearly an impossible task, and went back to devising interesting perfumes. Later he discovered that music concocted synthetically in the recording studio is equally resistant to notation, because setting down the notes, tempo, and so on after the event says nothing about how the music sounds, and this is the critical factor. Culture, said Eno, is much the same. Art is not an absolute, precisely mappable condition, or a quality that resides in things themselves, but the name of a transaction between artist, viewer and object, as in Duchamp's urinal ('He dared people to have an art experience with it'). There is no single, definitive 'history of art', but many histories, each dependent on where you stand and the cultural assumptions that you share. 'I cannot justify one particular line drawn through the cultural space,' said Eno. As if to confirm the essential instability of this space, the tachist light painting behind him dissolved continuosly from image to image.

All of this was elegantly put, refreshingly free of the usual jargon, but still depressingly familiar. In the era of cultural studies departments, The Late Show and Julie Burchill's The Modern Review, how many morelessons in cultural relativity do we need? This was an audience in which a man from The Wire could be overheard discussing memories of Blue Peter in the 60s with a textual acuity people once applied to Keats or Dylan. Nor was it quite the message we might have hoped to hear from Eno at this point.

One of the compelling features of his work has always been its tensions between theory an emotion, artifice and authenticity, irony and sincerity. Eno's early songs oscillate between surrealist word barrages and moments of confessional sentiment - and it was the slushy ones he apparently liked best. In the early 80s, he often praised the raw, unironised emotions of gospel music; he seemed impatient with the dissembling, post-modern desperation - typified by his former colleague David Byrne - to sterilise every experience with a set of pre-emptive quotation maks. His ambient music and 'quiet rooms' offered theraputic refuge from the bludgeoning sign-overload of the electronic city. At Sadler's Wells, though, Eno presented himself as a cheerful ironist, a fundamentalism doubting 'non-rootist', and a willing participant in a chancy future in which there will be no 'hard distinctions' and even moral concepts like 'freedom' and 'justice' will be up for grabs - tell that to Bosnian Muslims. 'I'm waiting,' he claimed, for everything else to become like perfume.'

In a closing sermon for lectern and altar, Eno described a celebrity wedding in Florence which appeared rto be staged as much for the benefit of the readers of Hello! magazine as fr the bride and groom (Iman and David Bowie). Could the couple's sentiments possibly be genuine as they composed themselves so self-consciously for the cameras? And which was the 'real' wedding - the one in Florence, or the one in the pages of Hello!? 'It was a lovely wedding,' said Eno, finally owning up, though only in passing, to his "pre-postmodernist" sympathies, 'and I was totally confused.' It was an amusing lecture, but I can't have been the only one who left Sadler's Wells feeling I\d been down this relativist blind alley once too often already.