If you didn't know better it might be hard to see the connection between a scattershot collection of punk rock debris and a group of meticulously collaged 19th-century wood engravings. Appearing simultaneously - and supplementing a massive touring retrospective - the two New York shows seemed completely antithetical. Consider one of many twisted historical trails. Bruce Conner's experimental films are arguably the prototype for all things MTV. Rapid fire editing riven by the pulse of modern music begins here - or so the story goes. Dennis Hopper, bad boy mentor of all good bad boys, was allegedly under the influence of Conner's films when he directed the tripped out drug sequences in Easy Rider (1969). He was also interested in Conner's creepy assemblages of detritus. At some point Conner saw Hopper's work copping riffs from his own and decided on a mock conceptual collaboration. He had always sensed the work's affinity to Max Ernst, and liked the idea of playing with history. At one point he imagined a fictional alter ego that would 'predate' Ernst. But when he saw the cross-pollination going on with Hopper's work, he had a better idea. He would ascribe the collages to Hopper without telling him. Conner has played games like this before. Not only does he periodically refuse to sign things, he at one point penned his own obituary for an art publication. Needless to say, this anti-commerce approach does not always sit well with salespeople. In 1965, the LA dealer Nicolas Wilder decided against showing the 'Hopper' collages. Conner ended up showing the work to Hopper who in turn purchased many of them.

The pieces on display at the Susan Inglet Gallery, made between the years 1961 and 1996, relate to those from the Hopper era. As in film editing they are all about the collision of images, but instead of the visual barrage characteristic of his celluloid endeavours these pieces are far more subtle. Their construction is so seamless you have to get up close to see what's going on. In a piece titled The Minotaur at Bay (1987), for example, close scrutiny reveals strange details: nestled in a gnarly tree sits a cloaked apparition with an animal skull for a head. As the eye explores the twisting lines of composition incongruous elements arise: a cannon, a dragon-like creature, a disembodied eyeball. The material he uses already contains visual logic linked to reality; before being manipulated they were, so to speak, straightforward pictures. From a distance, the results appear to have a similar formal foundation, but upon examination it falls apart. In Monument (1965) an outdoor pedestal has an inverted pedestal placed on top of it. A serpentine creature slithers out from between them. Two blocks of material have been placed together to create a home for a creature who previously belonged to another picture.

In stark contrast to the uniform quality of the wood engravings, the show at Curt Marcus, evocatively titled 'Dead Punks & Ashes', seemed like the work of a completely different artist. In fact, it looked like the work of a bunch of different artists. Sculptures, assemblages, collages, 'straight' photographs, and even a colossal photogram were displayed in the gallery. The material was loosely organised around images Conner took in the late 1970s for the punk 'zine Search and Destroy. At the time, he was keeping an eye on the frenetic scene at Mahubay Gardens, a legendary performance dive in San Francisco. Woven in amidst the pictures of now deceased rockers are tell-tale scraps of hospitals: a band-aid attached to a photograph here; a piece of intravenous tubing there. Like reworking the found material of wood engravings, Conner reused his own imagery, via the photocopy, to create new work years later.

Although both shows felt as if they contained self-perpetuating strategies pointing toward infinity, they were also paradoxically linked to eras which have definitely passed. Punk rock and the woodcut are, in this day and age, dead. Or are they? One piece at Curt Marcus may hold the answer. Its title is also its description: Ace Bandaged Wrapped Brick (1979). Building blocks from the past can be reused in the present. And so on into the future. For Conner, perhaps parts of the past are not really dead. Perhaps they're just hurt. 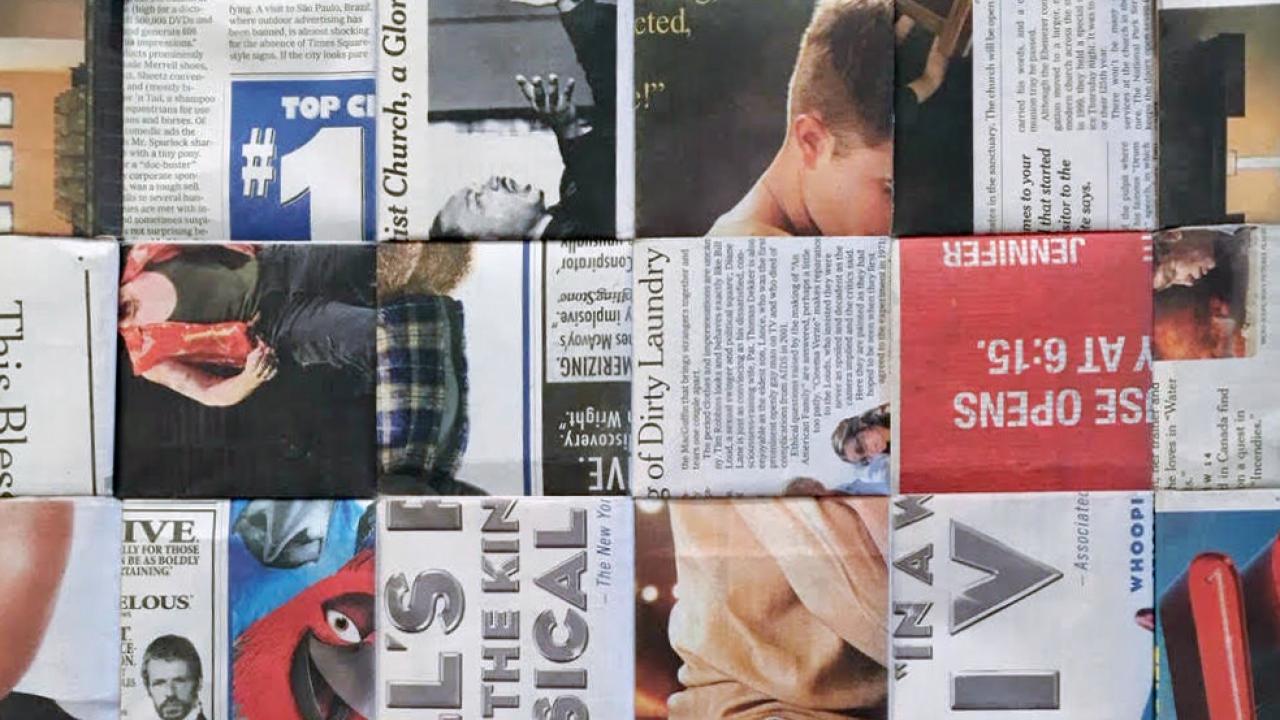