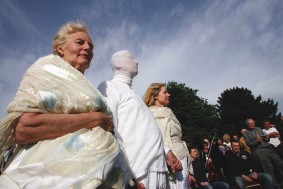 On a blustery evening in the grounds of the Irish Museum of Modern Art, art historian, museum director and former Jesuit priest Michael Rush, conducted the happiest of funerals. At the graveside of Patrick Ireland friends of the 36-year-old artist read poems in English, French, Spanish, German and Irish in celebration of his unusual life and then artist Alannah O’Kelly performed a bone-chilling ‘keening’ – a traditional Irish mourning wail. However, despite a coffin, a grave, eulogies and mourners, there was no corpse.

Patrick Ireland was, of course, one of the four alter egos (the others are Sigmund Bode, Mary Josephson, and William Maginn) of the artist, novelist, poet, television presenter, art critic and former doctor Brian O’Doherty, whose extraordinary life has been devoted to, amongst other concerns, ‘exploring expanded notions of self’. In 1966, for example, he famously invited his friend Marcel Duchamp to lie on a bed and take his electrocardiogram, which resulted in his Portrait of Marcel Duchamp. In 1972, in response to the massacre in Derry, Ireland, when 26 unarmed civil rights protesters were shot, and 14 killed, by members of the British Parachute Regiment, O’Doherty, who was living in New York, returned to Dublin to stage his protest at the Project Arts Centre. Clothed and masked in white the artist pledged to sign his works Patrick Ireland until the British military presence was removed from Northern Ireland and civil rights were restored. As Caoimhín Mac Giolla Léith observed: ‘informed by Structuralism, phenomenology and Minimalism […] O’Doherty’s work is haunted by the twin ghosts of what Clement Greenberg would have disdainfully termed “literature” and what historians used to call “The Irish Question”’.

As O’Doherty’s conditions have now been fulfilled, the artist decided to ‘joyfully reclaim his birth name’. The funeral began in the Gordon Lambert Galleries, where documents and photographs of the 1972 performance were hung on the walls. A death mask of Ireland’s face by Charles Simonds lay in state in a simple pine coffin, which was then carried out by young Irish artists. Ireland, dressed in white and with his head covered with a white stocking as he had been in 1972, followed his own coffin, holding the hands of his wife, the art historian Barbara Novak (who was also dressed in white) and senior curator, Christina Kennedy. The grave, on the lawn of the formal gardens of the Irish Museum of Modern Art, was surrounded by a large, quiet crowd. After the readings, which included poems by Anthony Cronin (‘Let the city be a spectacle, circus, arena this evening’), Stéphane Mallarmé (‘Is there a way, O Self familiar with bitterness to break the crystal insulted by the monster?’), Hans Belting (‘For a long time is seemed only the mask would remain’), Federico Garciá Lorca (‘Mortal field of moons and blood beneath the earth’) and Sean O’Riordain (‘There is nowhere on this earth/That is not our place of birth’) Ireland concluded his life by pulling the mask off his face and throwing it exuberantly into the grave, along with a handful of dirt. ‘We are burying hate’, he declared, ‘and it’s not often you get the chance to do that’. Then the band – formed of uilleann pipes, a fiddle, a bodhrán, bouzouki, mandolin, banjo and guitar – burst into traditional Irish tunes. The evening concluded in the chapel of the Irish Museum of Modern Art with a lively dinner and loving speeches to both the buried and re-born artists. Patrick Ireland is dead. Long live Brian O’Doherty.