History and the future; East and West; community and isolation 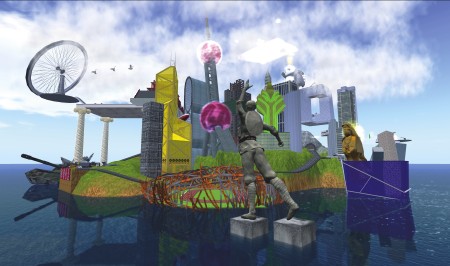 The Rising Tide (2008), Robert Adanto’s documentary on Chinese contemporary art quotes the 4th-century-bc Chinese philosopher Zhuangzi: ‘There is no grief greater than the death of the mind, indeed the greatest loss is the loss of the mind.’ Chinese artist Cao Fei explores this adage through her varied and multilayered practice, which includes filmmaking, photography, animation, 3D digital design, theatre production, writing and blogging. What, she asks, is being lost in China’s haste to become the economic superpower of the 21st century?

Cao’s childhood, in Guangzhou in the south of China, was shaped by the early stages of the country’s economic development. Guangzhou’s proximity to Hong Kong saw it designated a ‘Special Economic Zone’ in the 1980s, intended to attract foreign investment and create new jobs. Access to Hong Kong’s westernized radio and television stations allowed pop music, movies and fashion to seep into the fabric of Guangzhou’s youth culture. Cao has written that it was an ‘explosive cultural stimulus for my generation’.

Much of Cao’s practice has surreal, optimistic overtones, despite its roots in everyday life. The eight-minute video and series of photographs ‘COSPlayers’ (2004) illustrates this well. Cosplayers – young Chinese people who have adopted the Japanese pastime of mimicking their favourite anime or manga characters through costume and role-play – are tracked by the film as they move through the urban landscape. Spaces that were once rural fields are now gaping holes awaiting the construction of yet another high-rise. The setting heightens the disjunction between old and new ways of life, and reveals a strange narrative pulsing through the city. The crux of the contrast lies in the family dynamic that Cao alludes to when a cosplayer returns home in full regalia, much to the indignation of an older family member.

While the cosplayer movement seems to embrace vivid individuality, it actually has little to do with anarchy or revolution. The pastime, ironically, is governed by strict rules defining costume and interaction. For the older generation, however, the foreign, garish pop culture disguises its conservative core values. They see the youth escaping into a fantasy, disconnected from their community and family network. As Cao has written: ‘Mine is the culture of an almost theatrically materialistic era, drunk on and dazed by its possessions, divorced from the political ideology of the previous generation.’

Cao’s elaborate ‘RMB City’ project, first shown in 2007 at the 10th Istanbul Biennial, is a natural extension of the ‘COSPlayers’ work. Based in the online role-playing game Second Life, it further probes the extent to which her generation is reinventing itself in a virtual world as an escape mechanism. Created under the alias of China Tracy, Cao’s online avatar, the 3D city is intended as a safe-zone for its inhabitants. ‘There are no nationalities or borders here; we are all world citizens in a future world where everyone lives his second life and creates his own values,’ writes Tracy. Citizens connect through the keyboard and build a community of like-minded people committed to developing idealistic solutions for the world’s problems, such as a redevelopment programme for New Orleans (NO LAB) and a stimulus package to counter the economic downturn.

‘RMB City’ is a platform that intends to be welcoming but can quickly become isolating if one is used to a physical dimension in human relationships. Cao explores the limits of human interaction in virtual worlds through works such as her film about Tracy embarking on a love affair – i.Mirror by China Tracy (AKA: Cao Fei), A Second Life Documentary Film (2007) – and by constructing online avatars for her family (following the birth of the artist’s first child, Tracy soon introduced a baby boy named Sun). For Cao’s newest project in ‘RMB City’, to be shown at PERFORMA09 in New York this month, the artist uses Second Life as a platform for performance. The as-yet-untitled virtual production, to be performed live by avatars (controlled remotely by their human counterparts), is based on Yang Ban Xi – a dramatic format popular during the Cultural Revolution when traditional opera was banned. Part propaganda, part theatre, part ballet and, in Cao’s hands, part 3D animation, the performance will be an experimental morphing of contemporary Chinese cultural influences.

In contrast, the quotidian approach of Cao’s video work offers achingly beautiful insights into Chinese life across the generations. Whose Utopia (2007), a 20-minute video made at the OSRAM light production plant, reveals the monotony of factory life. The camera hovers over pieces of machinery, lingering to let their sounds emanate as though they were instruments in an orchestra. The workers come into focus and Cao captures the slight movements and nimble grace of their fingers. Some leave their work-stations and begin performing rhythmic balletic movements, oblivious to the sounds and actions of industry around them. They dance with unnerving commitment and elegance. The camera returns to focus on their still faces: each one stoic, resilient but optimistic. The concluding sentence scrolls across the screen: ‘My future is not a dream.’ It is an apt summary, capturing the mix of ambition and redundancy that weaves both through China and through the finest aspects of Cao’s practice.