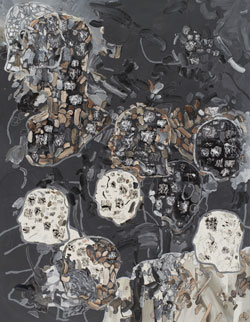 Carter teased us with several hints about his personal appearance in his recent two-gallery show, but just as he insists on concealing his full name, so he stopped short of actually lifting the veil. In the videos Double Portrait (2006) and Hand Model (Drawing) (2005) we see only a prosthetic hand as it struggles to draw and paint; in another video, Leg Model (2007), we see a prosthetic foot dragging along beside its better-working partner as both struggle across a carpet; in Untitled (2005 Polaroid #6) Carter’s eyes seem to peak through the back of a blonde wig; and in the canvases that formed the core of the show in both galleries we saw a variety of often featureless profile heads floating in space, sometimes with hair sprinkled all over their face. There were glossy, ceramic portrait busts as well – some white, some black; these, too, often had thin coverings of hair sprouting where it shouldn’t and features that were barely defined but for wide staring eyes. In short, one wondered if Carter is one of those unfortunates suffering for the camera on a late-night documentary, a man horribly deformed and fated to endless reconstructive surgery.

Appearances weren’t the only conundrum in Carter’s show: one also wondered about periodization, for the echoes of the past are vivid. The heads that fill the canvases are reminiscent of the maimed faces in Jean Fautrier’s ‘Otages’ (Hostages) series from the mid-1940s. Above all, though, they remind one of Elisabeth Frink’s sculpture, as Carter’s heads often seem stony, his muted palette of greys and browns very earthy, and when he does set this off with areas of bright blue, it is often only to lend some heads a marbleized quality. His canvases are oil sketches for a new disfigured Mount Rushmore: a tangle of gorgons who might just come forth from the rock and lumber once more across the earth like Georg Baselitz’ 1980s’ giants. In the photo-collage Untitled (2006/2007) Carter reveals a little of the landscape he imagines his heads inhabiting and, not surprisingly, it’s a Mittel-European, Alpine one. All these period flavours Carter pungently evokes without the slightest suggestion of easy pastiche. Instead, there is great formal complexity. He is very keen on a technique whereby certain individual brushstrokes and areas of ink drawing are collaged onto the surface, furthering the quality of disjointedness that crackles over his canvases. The handling of the heads is also quite lovely, making them float in and out of definition, small protrusions conjuring a nose on one side, the eyes eliciting a face on the other. Sometimes the form of the head seems barely present at all; instead, as in Fifteen Portraits, Eight Rocks, and One-Hundred and Sixty-One Abstract Paintings, 2007, #1 (2007), the surface of which is sprinkled over with hair, the contour of a face only just emerges from a gathering of hair that has come to animated life and arranged itself like iron filings directed by a hidden hand.

But who the hell is Carter? Or rather, what sort of person so consistently creates such lacerated and shattered self-portraits? Who posits multiple selves made up of some parts which are alive and others that are stony and dead, and does it all with a breezy humour? A man like Jasper Johns, perhaps? Or maybe Robert Gober, with all those waxy limbs? Carter may take seriously the imagery of traumatized mankind that was elaborated by the likes of Baselitz and Frink, but he’s camp enough to tease it all the same.

Carter makes great sport with all his prostheses and skin-graft-like components, and he has particularly good fun in Self-Portrait, Augmented Landscape, Portrait of Liz (2006–7), a pair of photographs in which we seem to stand just behind him watching cigarette smoke blowing out just in front: the smoke appears to come out in such a sharp jet that you wonder whether Carter’s whole body might just be a mechanical windbag. Above all, though, it is Carter’s painting that impresses: it avoids both the hysterical recuperation of history and the empty formal acrobatics of so much contemporary painting. Instead, it makes the past seem real, heavy like stone, yet not so weighty that there isn’t room for some ecstasy at the prospect of watching all those old gods pass.