On the train journey from Rome to Matera, the landscape slowly dries up. Two hours south of the capital, vineyards and orchards give way to the wavy grid of olive trees that covers most of Puglia. Two hours further on and the hills get steeper, the rocky dirt streaked with patches of sun-scorched brush. Atop one of those hills sits the old town of Matera, located a few dozen kilometres inland from the arch in Italy’s boot.

Matera is largely famous for its sassi, or cave dwellings: two canyons, running through the centre of the city, are riddled with caves, arches, steps and passageways that have been carved into their flaky limestone walls. Inhabited for an estimated 9,000 years, the sassi became the focus of a national scandal in the 1950s because of the dire living conditions they afforded. The government subsequently chose to forcibly relocate the area’s entire population, leaving the dwellings abandoned. In 1986, a renovation law set in motion their gradual recovery and gentrification, and an unexpected touristic afterlife. Today, strings of foreigners can be seen climbing the hundreds of stone stairways that connect the old dwellings, while hotels and gift shops have appeared in the renovated grottoes. Pier Paolo Pasolini chose the sassi as the setting for his film about the life of Jesus, The Gospel According to St. Matthew (1964), and Mel Gibson’s The Passion of the Christ (2004) was also shot there. Indeed, as a local friend has described it to me, Matera is a European city that looks like Palestine did 2,000 years ago.

Matera has recently been named the 2019 European Capital of Culture, following a bid process that lasted several years. This victory has been surprising to many who, while acknowledging the city’s unique heritage, were sceptical about its having the ability and resources to develop a solid cultural programme that would live up to international expectations. Matera has one of the highest unemployment rates in Italy, and a continuous stream of youthful emigrants out of the city has pushed its average age extremely high. Additionally, the surrounding region, Basilicata, is the only one in Italy without an airport.

Even more surprising than Matera’s victory, though, is the fact that its winning bid didn’t focus on the city’s heritage. ‘We wanted to propose an idea of cultural development that isn’t based on exploiting what you inherit,’ says Joseph Grima, the 2019 bid’s creative director (and occasional frieze contributor). Grima – the former editor-in-chief of architectural magazine Domus, and co-curator of the Chicago Architecture Biennial, which opens in October – was brought up in Assisi, a magnificent città d’arte in central Italy, and remembers how the city was sanitized by museification and flooded with tourist buses: ‘We don’t want to create a tourism machine in Matera.’

In line with that approach, Matera 2019 will focus on expressions of digital culture and sustainability that may, at first, seem ill-suited to the troglodyte dwellings they are intended to enliven. The programme includes a project to digitize and interlink the region’s archives and collections, and plans for an Open Design School (scheduled to open later this year) where lecturers from around the world will deliver freely available courses on open-source design and digital fabrication. The only new infrastructure, besides smartphone apps, will be Prometeo: a non-permanent ‘musical space’ designed by Renzo Piano for the composer Luigi Nono. The structure – similar to a huge wooden skiff – was premiered in 1984, but has been in storage since. In the 120-page bid document, the names of artists such as Kimsooja, Marjetica Potrč and Tomás Saraceno recur more often than the names of the sassi themselves.

The concept of ‘culture’ in the Matera 2019 programme seems closer to that of a biennale than a heritage-valorization plan. Couched in the language of international art discourse, the bid sees the host location’s beauty not as a focus but as a dramatic backdrop for a largely imported cultural offering that would be just as valid sited anywhere else. It is the same spirit as that of the Venice Biennale – an event whose host city, like Matera, has a unique, if logistically impractical, physical character. It was this attitude that made Matera’s bid stand out among its competitors as the most innovative and forward-looking. It speaks of technology rather than archaeology, evoking the image of a workshop rather than a museum – a networking aspect that is part of any biennale’s raison d’être. Members of Matera’s hospitality industry are looking forward to longer visits by a more cultured crowd, which they see as preferable to an increase in the already high number of day-trippers.

However, other locals fear that the 2019 approach could end up simply replacing the busloads of snapshot-seeking tourists with the equivalent of a spaceship full of intellectuals. By the time it becomes apparent whether these visitors’ legacy has any real value, they will likely already be on their way to the next biennial, where they will admire yet another dramatic backdrop from the windows of their hotel rooms.

The spectre of beamed-down intellectualism is well known to older generations in Matera. When the sassi were evacuated in the late 1950s, residents were relocated to new apartment complexes on the city’s outskirts. These had been designed by a team of international architects that included Giancarlo de Carlo, a member of CIAM – an organization founded by Le Corbusier to research and spread the ideals of modernist architecture, which the new Matera settlements embodied in full. Their work was based on research financed by Adriano Olivetti, an enlightened technology entrepreneur and heir of the eponymous typewriter company, and the new neighbourhoods were celebrated internationally by magazines and exhibitions.

Although they were lauded by the international design community, in practical terms, these new developments were a disaster. They had communal spaces designed to encourage a form of living based on the architects’ imagined sense of how people used the pre-modern spaces of Matera’s cave dwellings – although the cramped dimensions and the blurred lines between private and public territory proved a source of conflict rather than joyous communitarian spirit. Located near the fields in which the inhabitants of the sassi had traditionally worked, the new living areas were effectively segregated from the city. Five decades after they were built, they look at best like derailed utopias, at worst like something built solely to boost their designers’ careers.

Some elements in the Matera 2019 programme, too, could be said to be rooted in international discourse rather than in the specific context they aim to address. One such element is unMonastery, a residency launched in 2014 as part of the bid, which was coordinated by Ben Vickers, Curator of Digital at London’s Serpentine Gallery. Artists, hackers and activists from all over the world came to Matera for a week-long hackathon in an attempt to identify and address the city’s problems. This led them, for instance, to design new tourist routes and build a local transport iPhone app. But many locals who attended the project’s public debriefing last October said they had felt sidestepped or disregarded. ‘It’s like you showed up without introducing yourselves and claimed you could solve problems we’ve been struggling with for decades,’ said Sergio Fadini, a writer and activist. Unfortunately, he spoke in Italian, which few at the unMonastery residency could understand.

However, in general, this negativity was an exception rather than the norm. At around the same time, the city’s Palazzo Lanfranchi hosted a sprawling exhibition on Pasolini to celebrate the 50th anniversary of The Gospel According to St. Matthew. The ordinarily sleepy museum of medieval art saw an unprecedented number of visitors attend an exhibition that dealt with cinema, history, identity and urban planning; the show was so popular it had to be extended. One of the exhibition’s curators, Marta Ragozzino, has been a driving force on the Matera 2019 committee. As the superintendent of the region’s museums, Ragozzino recognizes the risk of the 2019 programme turning into a biennial ‘spaceship’ that operates entirely independently of a specific physical context. ‘But, in that case, it is our spaceship,’ she adds. ‘We designed it to make it land in Matera. And the city, too, is changing in order to host it.’

On a recent visit to Matera in May, I spoke to one of the guards at the Lanfranchi. He said he had never seen anything like the Pasolini exhibition before. He’d even promoted it in his free time: something he had not felt the urge to do previously. ‘We don’t really know what’s going to happen,’ he said of the 2019 cultural bid, ‘but we feel proud to work here now.’ 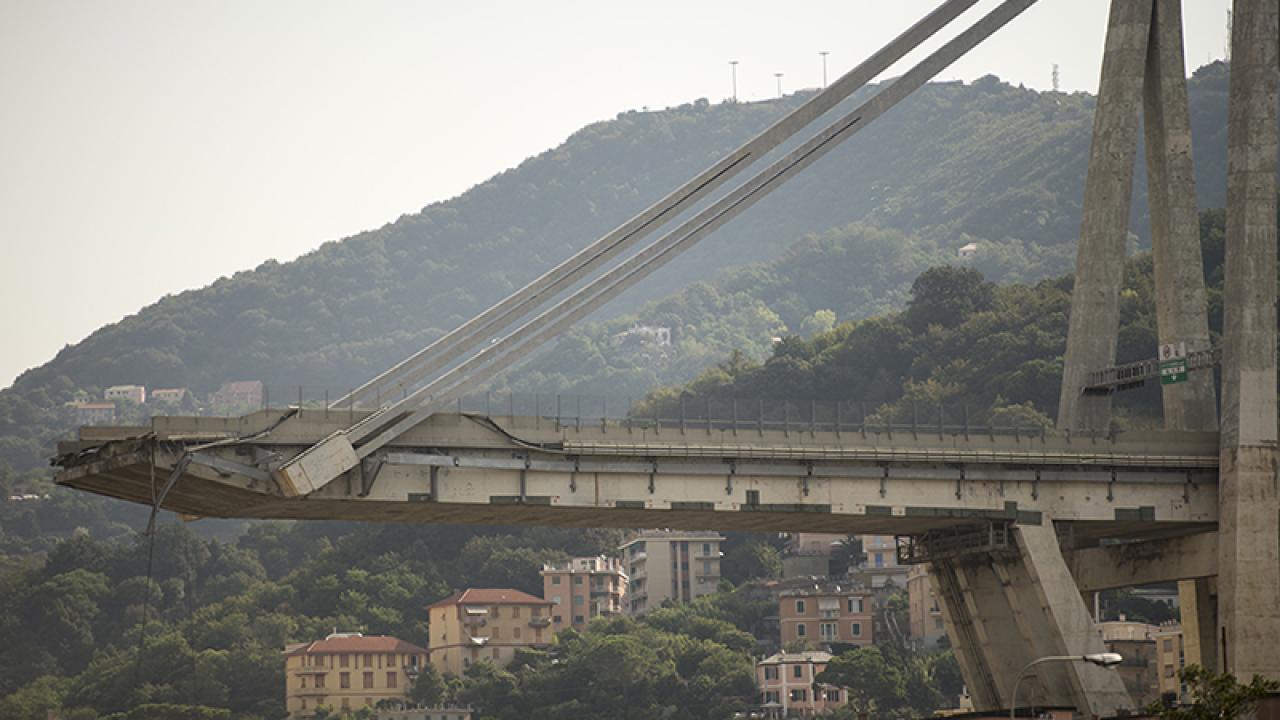 The Italian architect has offered to help rebuilding efforts, after the collapse of the Morandi bridge which killed 43