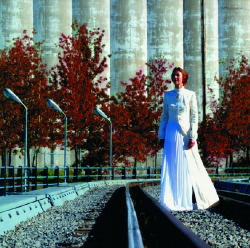 Cees Krijnen has been making work with and for his mother, Greta Blok, for the last five years. As the project is ongoing, with each review history must be recapped as if it were a soap opera or a parlour game. Blok divorced Krijnen's father over 15 years ago, and they have been fighting in the courts ever since. In 1999 Krijnen was working on his Prix de Rome entry when, two weeks before the final presentation, his father brought another lawsuit against his mother, who was by this time broke. Combining the two problems - the Prix de Rome and his mother's predicament - Krijnen interfered for the first time. He invited the (all male) judges of the prize to visit his studio, introducing them to his mother as if they were suitors: 'This is Michel-angelo Pistoletto. He is a very famous artist ...' and so on. It seems, in the video documentation, that natural competitiveness among the judges surfaced, as they act like bashful but complicit contenders. Krijnen subsequently won the Prix de Rome for Financing My Parents' Divorce and spent the prize money on legal bills and a new central heating system for his mother.

The mythical-sounding word 'uxorious' means having an excessive devotion to one's wife. That there is not an equivalent for excessive devotion to one's mother suggests that a close relationship of this kind is uncommon and damaging. Indeed, the fashion industry seems to love the idea of the empowered, independent, attractive, middle-aged woman yet is puzzled by the son's interference-as-art. In the gallery, by contrast, the everyday object as art is commonplace, while the performative element and the potentially exploitable role of the mother are problematic. At Studio 1.1 a video of the Prix de Rome performance established the context of the objects in the gallery - a gold-plated garden sprinkler set with a diamond, courtesy of the Cartier Foundation, photographs of Blok in her ambassadorial flying suit and a gold suicide pill made from all the jewellery ever given to her by her ex-husband - but without accompanying texts, it was rather like walking into a cinema half-way through the film.

Like space shuttles that use the moon as a slingshot, Krijnen's project draws momentum from the quandaries of interdisciplinary practice. He pitches the status of the art object against that of action, interrogates the legitimacy of performance without audience and broaches attendant problems of documentation. He also embraces the confusion caused by utility in art - by transgressing the personal/social divide he authors situations that are useful directly to his mother, and by example to all divorcees or the generally disempowered. Yet the work is neither halcyon nor sententious; its morality is more ambiguous, as exploitation and aid have a push-me-pull-you rapport. Woman in Divorce Battle on Tour might be considered a cynically and idealistically laced investigation into the leakiness of art, media and life.