Although Charlemagne Palestine is known primarily as a musician associated with minimalist composers such as Tony Conrad, La Monte Young and Terry Riley, he has in fact been present in an art context since the early 1970s, with a series of solo shows that decade at the prestigious Sonnabend Gallery in New York. Within this context, however, his cross-disciplinary approach has defied classification, as reflected in the way subsequent discourses and terminologies treated him first as an ‘action artist’ and later as a ‘multimedia artist’. In Vienna, he deliberately positioned himself in the tradition of the Gesamtkunstwerk or total artwork, although with a typical Palestine twist. His own staging of this Wagnerian concept was as deliberate as it was ‘meschugge’ (a word, roughly meaning ‘bonkers’, he likes to apply to himself, with reference to his own Jewish roots). 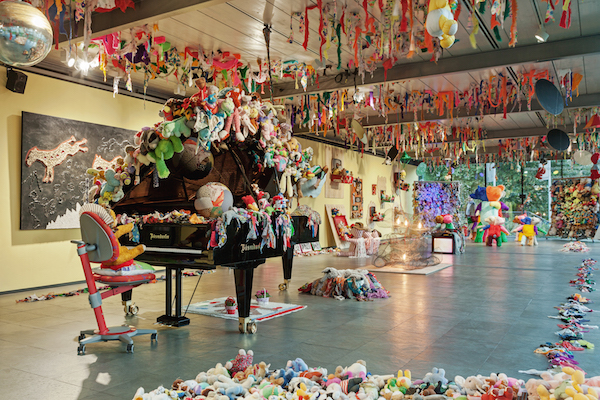 Curated by Luca Lo Pinto using an approach that was anything but minimalist, GesammttkkunnsttMeshuggahhLaandtttt was the first exhibition to include work from nearly every artistic phase and field of activity in Palestine’s career: early performance-based videos like Body Music I and II (1973/74) or St. Vitas Dance (1975), in which he sings or hums himself into a trance-like state, sometimes surrounded by soft toys, dolls and scarves, as well as paintings (Pictorial Aereograms, 1978) and notations (The Slaughter-Red Room, 1979), drones made by plastic keyboards with stuck keys, and countless versions of Palestine’s signature teddy bear sculptures and pictures, such as Documenta Project (1987) and the recent God-Bear Museum (2015). 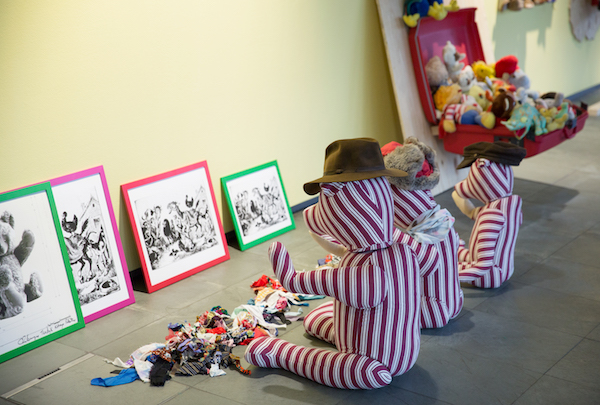 Teddies with parachutes hung from the ceiling along with strips of fabric, mirrors and disco balls that reflected and fragmented the scene. The long outside wall of the usually light-flooded pavilion was similarly obscured by hanging strips of fabric, reinforcing the impression of a closed entity. Within this chaotic-looking all-over approach, however, there was a clear centre: a Bösendorfer grand piano, also totally covered in soft toys, with loudspeakers installed inside playing back the pre-recorded composition Nothing to Say ‘Only Listen!’ (2015), which blended with the soundtracks of the other works (on this same piano, Palestine gave a live concert while the exhibition was dismantled). It was this specific type of extended-range piano (developed, incidentally, in Vienna) that the young Palestine first discovered in 1969 at CalArts, using it to develop the overtone-based drone sound, sometimes using just a single chord, which was to become his trademark.

The soft toys referred to by Palestine as ‘Divinities’ have also been a constant feature of his live concerts. As well as standing for a truly stoic refusal to grow up, these beings usually viewed as transitional objects are granted superhuman status by the artist, as they symbolically embody our family, childhood and origins. This differs fundamentally from Mike Kelley’s use of soft toys. Whereas Kelley highlights the denial of love experienced by children as they focus their affections on such toys, in Palestine’s work they form the basis of the overall artistic vision showcased in this exhibition. 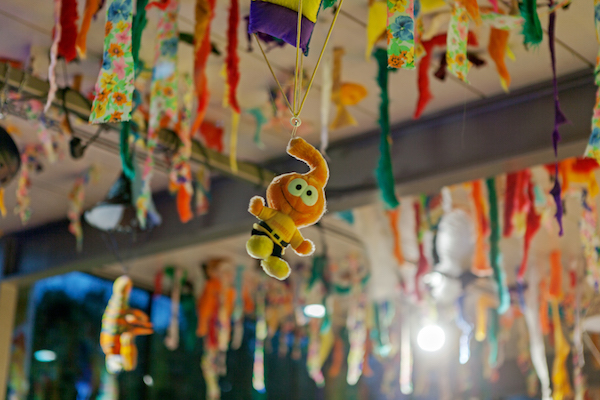 GesammttkkunnsttMeshuggahhLaandtttt was also the opposite of the strictly conceptual show by Palestine’s longstanding friend and sometime collaborator Tony Conrad just a few months earlier at the same venue, under the title Two Degrees of Separation. With the replica of a prison cell, he pursued his engagement with issues of isolation, surveillance and transparency. Palestine’s total artwork, on the other hand, aimed for the liberation of the individual as part of a sociocultural revolution. And whereas Conrad’s works only found their way into galleries relatively recently (including shows at Galerie Buchholz in Berlin and Greene Naftali in New York), Palestine has long been present in the art context, always remaining an outsider among insiders – a position that may change after this show. Although the concept of the total artwork tends to be associated with failure due to its utopian character, Palestine refers to it in a ‘schicky-schmicky’ way, as he puts it, in order to directly counter simplified or restrictive readings of his artistic output. In this light, rather than offering a classically retrospective overview, GesammttkkunnsttMeshuggahhLaandtttt is more about allowing visitors to immerse themselves in his personal world.
Translated by Nicholas Grindell

Fiona McGovern is a research assistant working at the Collaborative Research Centre ‘Aesthetic Experience and the Dissolution of Artistic Limits’ at the Freie Universität Berlin.