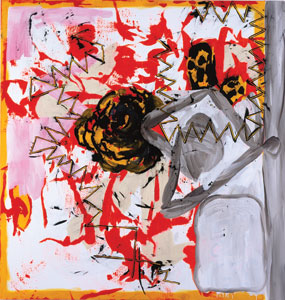 Thoughtfully spaced throughout the gallery’s bright sequence of rooms, Charline von Heyl’s new paintings and works on paper exude a calm, classical beauty. This immediate impression is somewhat deceptive, however, insofar as these works are not only clear and bright, but also tremendously dynamic – phantoms brought to a temporary standstill, circling helicopters gouging the ground with their downblast, or scrunched up strings of flags unfolding and taming the wind with paint.

For the artist’s fourth exhibition at the gallery, the paintings, which all date from 2007, share the same format: an almost square 208 x 198 centimetres. The scale is generous enough to accommodate a lingering eye working its way slowly across the surface of the canvas, as it might appraise a person standing nearby, taking in gesture and movement. Beside the paintings hang smaller woodcuts, also made this year, although in some cases they are reworkings of older pieces. Next to the broader expanse of the paintings, they come across as compressed ideas: erratic and deliberately gawky constructions in pale greys and yellows, often resembling spiky lemons or deep tyre tracks. Although their forms are almost as starkly outlined as caricatures, they remain delicate and ambiguous.
In addition to this fluid alternation, however, the canvases themselves are also split clearly into two distinct groups: some have extremely colourful surfaces, blending washes of paint that is noticeably denser towards the centre; others conform to the sharply contrasting black and white of works such as Plaisir Noir, which is a paraphrase less of abstract painting than the classically reduced photography of New Objectivity, and whose structures of gossamer-thin lines evoke a beetle crawling through a Petri dish full of dandelion clocks.

Although hugely appealing, however, these black and white works are almost simply a foil to the virtuosity of Von Heyl’s colour work on canvas. The self-referentiality of painting has long been a theme in the New York-based artist’s work, and from pieces such as Rize or Tathata emerge forms that look as though Tachisme or Art Informel have broken free from the annals of art history and, thus reborn, are now able to imprint their faces on the canvas – the Turin shrouds of postwar Modernism.

And as if this pictorial, yet almost sculptural, appropriation of styles tied to the canvas by a few strokes of colour was not disconcerting enough, with works such as Dumka the artist also ironizes her own endeavours. The picture surface is almost entirely filled with a rather patchy turquoise from which, to the lower right of the centre, another art-historical reincarnation emerges: a twirling chunk of Cubism. This combination is undermined, however, by a zebra-striped border that appears on the canvas as a frame. It would be an understatement to speak here of contrasts or of opposites. Within this pairing, the abstract form appears almost natural, while the ‘naively’ painted border looks like a deliberate statement. The artist has surrounded many of her motifs in this way, but the cosmos through which her abstractions wander nonetheless seems real and coherent.

Von Heyl, who studied under Jörg Immendorff and Fritz Schwegler in Düsseldorf, certainly didn’t invent the painterly reworking and repurposing of historical styles. But these works are an illuminating and enigmatic answer to the question of how to quote; not presenting them as mere revenants, but framing them within a different time and a new understanding. They keep the motifs in motion instead of mummifying them.