BY Rebecca Rose Cuomo in Exhibition Reviews , US Reviews | 09 NOV 22

‘This is Chris. Is this Chris. Chris this is. This is Chris. Is this Chris his. Chris his is.’ A tape recording of the artist’s speech resounds throughout the space, filling it with language (This Is Chris, early 1970s). This is ‘Christopher Knowles / STAND’, a landmark exhibition curated by Noah Khoshbin at The Watermill Center. Knowles’s largest show to date, it is a comprehensive survey of his prolific, five-decade, multidisciplinary practice, featuring more than 200 drawings, typings, audio recordings, paintings and sculptures, many of which are presented here for the first time.

As the recording unravels, sounds merge – ‘this’, ‘his’, ‘is’, ‘Chris’ – texturing the room with a fractured rhythm that seems to mimic the apparently unpredictable typings on the walls. ‘Falling C typings’ (1977), a series of 52 untitled works on paper produced with a typewriter, depict constellations of abstract patterns, some loosely structured, others tightly ordered. Most are comprised solely of a lowercase ‘c’, but occasionally spell out words or other combinations of letters: ‘rage’, ‘rrrrgggg’, ‘RED’, ‘GREEN’. Eclipsing its semantic function, language acquires an otherness that disorients and destabilizes our expectations. Knowles’s words shift away from meaning, and instead gravitate toward the purity of sound and form, the performative act of creation. This is the beauty of Knowles’s practice: he constructs new worlds with familiar building-blocks of language, pattern, pop culture, politics and systemized organizations of time and space (clocks, maps, flags). His work encourages us to move beyond habitual, normative modes of thinking, observing, reasoning and judging: our obsessive search for meaning, our compulsion to fill voids of incomprehension and uncertainty.

Indeed, what may at first seem whimsical or naïve in Knowles’s work ultimately reveals itself as methodical and calculated, governed by specific sets of rules and structures. A flower, a lamp, ladders and staircases: these are some of the images that occupy the pages of another series of 12 black and red typings constituted by repeated letter c’s, playful and pixelated, produced between 1985–86. The images are not mapped out in advance. Knowles is able to visualize the underlying geometric structure of space, the mechanical grid inherent to the typewriter apparatus, to generate precisely spaced, perfectly centred arrangements, which he can re-create from memory. Bird typing (1982), for instance, is an abstracted image of a flying bird, identically reproduced at least five  times. His capacious memory also manifests in his list typings, such as New York City’s Top 40 of 1964 (2011), in which he meticulously tabulates the top hits of a given year in neatly ordered rows. Meridians of both personal and collective memory, these works memorialize specific historical moments by invoking music as a powerful and intimate mnemonic device.

Knowles contracted a rare blood disease in utero and was born with a neurological condition that resembles autism. His creativity and unique talents were nourished by his family, who often feature lovingly in his art. One of his best-known works is the early 1970s audio recording Emily Likes the TV, in which the artist’s voice repeats variations on the phrase: “Emily likes the TV, because she watches the TV, because she likes it.” This tape made its way into the hands of renowned theatre director Robert Wilson, founder of The Watermill Center, catalysing their ongoing collaboration and jumpstarting Knowles’s independent artistic career. He still performs the piece live – from memory, of course. It’s challenging, funny and charming to watch – or listen to, in the case of this show. At the end of some performances, he’ll say: ‘And that’s how it goes.’

'Christopher Knowles / STAND' is on view at The Watermill Center, New York, through December. 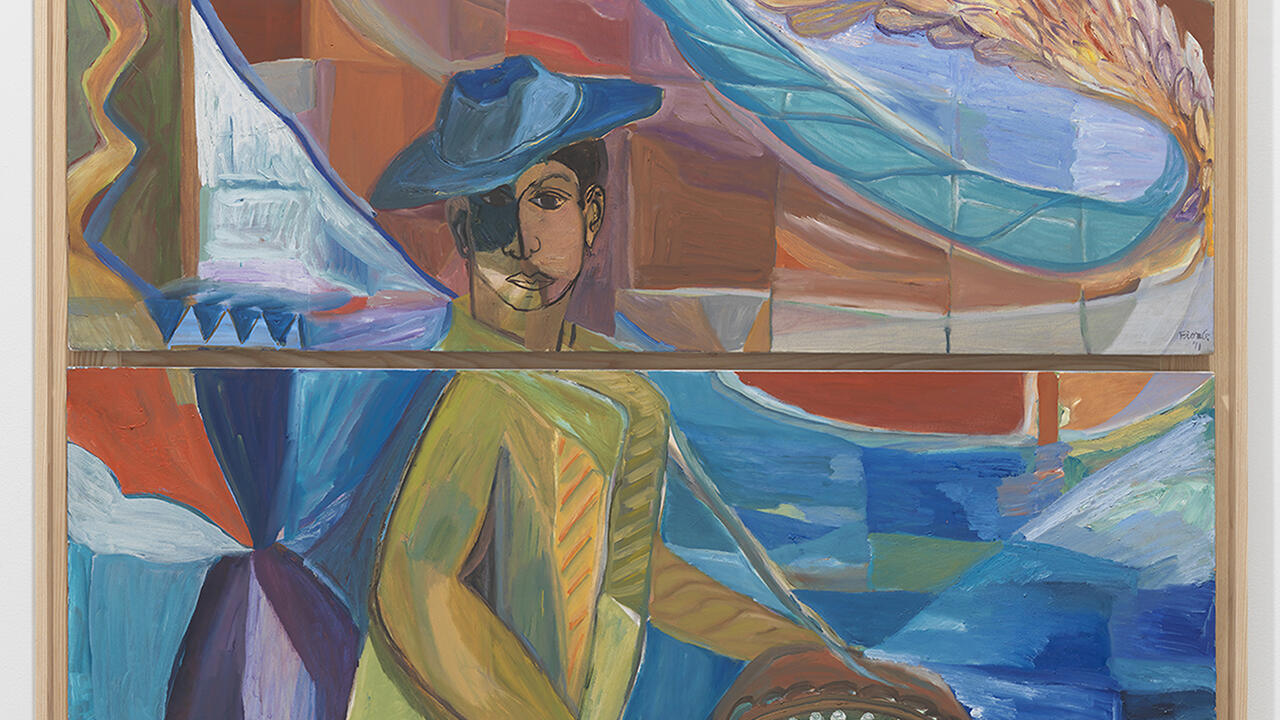 Exhibition Reviews , US Reviews
The Poetic Synthesis of Ficre Ghebreyesus