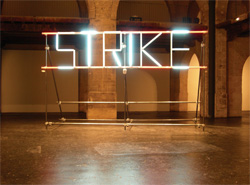 Every student, teacher and parent in France knows Claire Fontaine. Not the Paris-based collective founded in 2004, but the French brand of school supplies it is named after, whose logo is everywhere stamped on the tools of their trade. Instantly connoted locally and translatable as Clear Fountain (a play on R. Mutt’s 1917 Fountain?), Claire Fontaine is not a fictional female character, even though the collective occupies the third person singular feminine as its subject position. She describes herself in her biography as a ready-made artist stripped of use-value who intervenes in a world characterized, in part, by a ‘crisis of singularities’, or fixed identities.

As an ‘ordinary subject elevated to the dignity of an artist by the mere choice of the artist’ – pace Marcel Duchamp on the ready-made object – Claire Fontaine adopts positions pseudonymity enables: the denial of individual skill, authority and originality through the collective détournement of signs, symbols, images and objects available in contemporary visual culture. She also writes prolifically, and her texts are crucial to understanding her project. Her trenchant assessments of the artist’s political role (one of Bartleby-esque impotence), and her immediate responses to socio-political events in missives and tracts (Dear R., during the Parisian suburban riots, and Requiem for Jean-Charles de Menezes, after his wrongful assassination, which were first realized as piles of texts freely distributed to exhibition visitors, both 2005), testify to a deep and ongoing engagement with contemporary political culture, mass protest movements past and present, and such critical thinkers as Giorgio Agamben, Walter Benjamin, Jacques Rancière and Gilles Deleuze.

Claire Fontaine questions political impotence through her key notion of the ‘human strike’, inspired by Italian feminist groups of the 1970s to counter the poverty of collective political discourse and action with silence and proposals to halt human reproduction. These days strikes are considered exotic spectacles, as foreign news accounts of the crippling French student movement in Spring 2006 endlessly reported. Claire Fontaine’s STRIKE (K. font V.I.) (2005) transcribes production at a standstill: a red and white (or red, white and blue) neon sign is triggered by stillness; the lights go out as soon as the motion detector senses activity. Labour and alienation are major preoccupations, and the collective frequently uses neon signs to address the spectator and register protest. Untitled (Thank You) (2005) is a red outline of Karl Marx’s face superimposed with a blinking white ‘Thank You’, which was installed along with another neon work, Arbeit macht Kapital (Work, Power, Capital, 2005), in the glass pavilion that houses the Galerie Meerrettich near the People’s Theatre on the Rosa-Luxemburg-Platz in Berlin. Other signs include: FOREIGNERS EVERYWHERE (2005) written in Arabic or Italian; the circular Ibis redibis non morieris in bello (2006), which flashes various combinations of a rough translation of its title with the words ‘you will go to war not come back you will die’, and Pay Attention Motherfucker (2006), which spells out ‘merci de votre vigilance’ – the French response to heightened states of awareness in relation to the increased terrorist threat.

Attracted by neon’s slightly outmoded or vintage associations and its historical relationship to the sale of commodities, Claire Fontaine reflects its use by artists including Bruce Nauman, Dan Flavin, Cerith Wyn Evans, Philippe Parreno and Pierre Huyghe. The discourse underlying her signs may be distinct, but the form deliberately resembles countless other art works in circulation in a market that rewards sameness. Their content and placement in provocative contexts – an Arabic sign in post-9/11 New York; Karl Marx’s iconic visage next to the People’s Theatre in post-Communist Berlin – make all the difference by de facto politicizing the relationship of the gallery space to its site.

Appropriation is an artistic strategy laden with precedents, and one of the ways Claire Fontaine distances herself from those is by advocating theft. 371 Grand (2006) copies of keys to Reena Spaulings Fine Art in New York made using the same process the FBI employs, and Passe-partout (Paris 10ème) (2006), a set of lock picks, hacksaw blades and a small flashlight hung on an ‘I Love Paris’ key-chain, are wryly subversive little sculptures, especially when accompanied by the lock-picking demonstration in the video Instructions for the sharing of private property (2006). As an extension to these works, Claire Fontaine has offered to duplicate keys to galleries that show her art, and to sell them titled with the gallery’s address, therefore granting the purchaser access to the valuable objects held there. In two recent Paris exhibitions, versions of Passe-partout were hung nonchalantly on a hook, ready for the taking. But, just as she expected, nobody walked off with them.

Claire Fontaine knows that works like these only function symbolically. She has no illusions about her political impact, no utopian vision, no nostalgia for the avant-garde. Quite simply, art-making is her way of engaging with questions that preoccupy her, individually and collectively, in the present. Those questions are political. She clarifies her position this way: ‘We are like any other proletariat, expropriated from the use of life, because for the most part, the only historically significant use we can make of it comes down to our artistic work.’